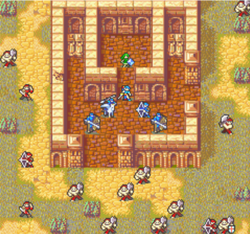 Chapter script
[view]
“After defeating the bandits, Lyn continues westward. She and her colleagues stop for the night at a ruined fortress. The Ganelon bandits are in a rage after their brethren fell to Lyn's sword. They race in pursuit of the companions. Their angry footsteps sound closer and closer...”
—Opening Narration

In Occupation's Shadow is Chapter 4 of Fire Emblem: The Blazing Blade.

Lyn's group decides to rest for the night in a worn-down fortress. There, they meet Natalie, a woman who tells them that she is looking for her husband, Dorcas. Meanwhile, Carjiga, a member of the Ganelon bandits, find Lyn's group and orders his men to attack. He tells one of his soldiers, a man named Dorcas, that if he captures one of the women inside, he'd raise his pay. Although reluctant, Dorcas seems to agree. During the fight, however, Lyn sees Dorcas, recognizing him from a picture Natalie had shown her. She talks to him, telling him that his wife was inside the very fortress he was attacking, and he immediately joins their team. After holding out long enough, the bandits retreat. That evening, Dorcas says that he has decided to remain with Lyn's group, in hopes that he could make some money on the journey.

Put Kent and Sain by the southern entrance and Wil and Florina by the west. Lyn should be by the east to recruit Dorcas and defend as needed.