In the White Light

In the White Light 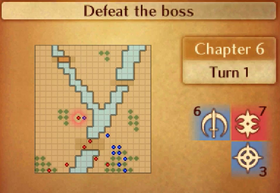 Chapter script
[view]
“Nohrian and Hoshidan royals clash blades on the battlefield. Corrin is torn between both kingdoms but finally makes a fateful decision...”
—Opening Narration

In the White Light (光へ手を伸ばす Hikari e Te o Nobasu, Reaching Out to The Light in the Japanese version) is Chapter 6 of Fire Emblem Fates in the Birthright Version. The Conquest-equivalent chapter is Embrace the Dark with the Revelation-equivalent chapter being Into The Ground. This chapter takes place in the Plains of Hoshido.

After seeing the ruthless nature of King Garon by causing the deaths of numerous Hoshidan lives and their own mother, Corrin decides to join the Hoshidan army. Labeling Corrin a traitor for refusing to return to Nohr, Xander attacks Corrin, hoping to take them home after they are weakened, however, Ryoma steps in the way to protect them. The Nohrian army is eventually defeated by Corrin and their siblings, and they are thereafter forced to make their retreat. With the war now unavoidable, Corrin begins their journey to protect their homeland from the land they were raised in.

Enemy positioning is changed on Hard and Lunatic, resulting in enemies being closer. Notably, Leo is positioned within immediate attacking range of the party.

Ryoma, Hinoka and Takumi temporarily join in this chapter, but they gain no exp. Felicia/Jakob will also rejoin you at the beginning of this chapter.

On Normal and Hard, Xander will only attack Ryoma, but on Lunatic, Xander will attack anyone who enters his range, so be careful. Ryoma can defeat Xander in 2 rounds with no real difficulty. If you choose to maximize experience gain, weaken the enemies with Hinoka and Takumi, then use units of your choice to finish them off. Note that Leo and the nearby cavalier will be covered by Xander's attacking range, severely limiting your strategic options. Ryoma may opt to take out Leo on turn one, but this will deprive you of experience. As Birthright allows battles outside of the main story, this is only really an issue if you're aiming to complete the main campaign only.