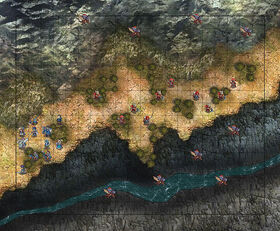 Chapter script
[view]
“While escorting the exalt to safety, the Ylisseans are ambushed. Emmeryn gives Chrom the Fire Emblem and returns to Ylisstol to protect her people.”
—Opening Narration

Incursion (Invasion in the Japanese version) is Chapter 7 of Fire Emblem Awakening.

This map is a race to the finish. Your army starts on the west side and must make its way to the east side, killing the enemies along the way. The enemies consist of barbarians, archers, thieves, and wyvern riders. Surprisingly, there are no mages of any kind, so it is safe to bring your powerhouses with low resistance, such as Frederick, Vaike, and Kellam. Reinforcements will appear on this map at the start of the enemy phase on Turn 5 so choose if you want to fight more wyvern riders or work fast.

Start by using Sumia to fly a strong unit that can take a lot of hits, dodge a lot of attacks, and take down a lot of enemies alone out east as far as she can reach. This will clear up all the enemies in the middle of the map. Have everyone else start making their way east, being careful of the wyvern riders with their exceptional range. It is best to keep Chrom in this group so that his Falchion can be used to easily take down the wyvern riders. By the end of Turn 2, the entire left hand side of the map should be cleared and now it is time to face the right hand side which includes the boss. At this time, Cordelia will appear at the southwest corner of the map and warn you that reinforcements are on their way. She can be controlled immediately so quickly have her reach your army, but be wary of axe users and archers since she is a pegasus knight.

This is a "rout the enemy" chapter so killing the boss will not end the chapter. You have 2 turns left to take out the remaining enemies which should be mostly wyvern riders. Use archers, mages, and Chrom's Falchion to finish off the wyvern riders and take out all the enemies. If done correctly, you should not face any reinforcements and Paralogue 3 will unlock along with Chapter 8 after completing this chapter.