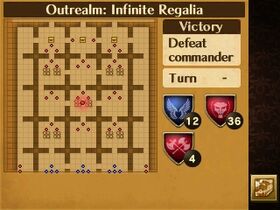 Chapter script
[view]
“Divine Weapons—unique weapons that have received the blessing of the gods. However, deep within some ruins, twins of these divine weapons slumber. These treasures are guarded by deadlords and nobody has been able get past them. Is there anyone brave enough to conquer these ruins...?”
—Opening Narration

Infinite Regalia (Infinite Divine Weapons in the Japanese version) is Xenologue 15, as well as the last Xenologue of Series 1: Outrealm Talismans of Fire Emblem Awakening. This chapter takes place in the Outrealms.

Not 12, but 36 Deadlords are guarding chests containing a variety of powerful and legendary items, ranging from Archanea's spectral sword Mercurius to Tellius's long-ranged Double Bow. After completion of the mission, Eldigan joins as a Level 14 Paladin. Also upon the first completion of the map, the player will receive a Silver Card.

All of the Deadlords have rank A weapons, and have at least 3 skills regardless of difficulty. Tigris is the most dangerous Deadlord because of his Counter skill, and there may be cases in which there can be a lot of them. The weapons the Deadlords carry can vary, and multiple types of the same weapon can be carried by the same or different units. Deadlords do not move unless a target is within range of them. Therefore, they will not rally unless this occurs.

There are also 4 regular thieves quickly making their way to the chests at the end of the map as well. They can serve as chest lockpickers if a unit with Locktouch is not brought onto the map but must be killed if they do steal the Regalia before the player can pick the chest themselves, they will need to be quickly defeated to claim the Regalia. If the plan is to grab the Regalia items, leave the enemy commander alive (who is always Mus with Gradvius and no movement); if he falls, the chapter will end prematurely.

A script of the chapter can be found here.

“A set of unique weapons lay buried deep within ancient ruins, watched over by an evil warlord. No hero has ever been able to recover them–but then, you're not just any hero, are you?”
—Website Opening Narration
“All this trouble over such a little item...”
—North America eShop Opening Narration 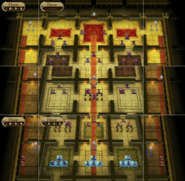