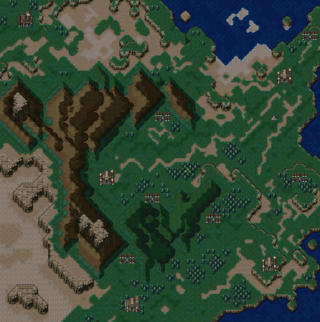 Chapter script
[view]
“The intense battle over control of the capital sent most of the powerful lords to their grave. Only Lord Arvis' plan went without a hitch as he successfully gained full control of the kingdom. After overthrowing the two opposing kingdoms, Silesse and Leonster, Lord Arvis unified the continent. And with the overwhelming support of the people, he became the first emperor of the Grannvale Empire. ...Seventeen years since the Battle of Belhalla. The people who once enthusiastically welcomed Emperor Arvis were now experiencing extreme hardship under his oppressive rule. And in the surrounding nations which fell under the empire's rule, the people were forced to live in slavery like conditions. Isaach was no exception. The extreme conditions had taken its toll on the people. King Danann of Isaach was a merciless ruler, taking much after his father, Duke Lombard. He dropped the social standing of the Isaachian people to that of slaves, while he himself indulged in the pleasures of the royal palace at Ribaut. Danann's second oldest son, Iuchar, presided over Isaach Castle while his youngest, Iucharba, presided over Sophara. Danann's confidant General Harold administered the remote Ganeishire Castle. He as well relied heavily on oppressive governing tactics to control the citizens. Fortunately, the people of Isaach were not without hope. Prince Shannan had organized a liberation army based in the northern isolated village of Tirnanog. Their strength increased day by day... Among the army of young soldiers was one who the Isaacian citizens referred to as 'the Scion of Light'. He was also revered as the Imperial Prince of Grannvale. He was the young leader of the liberation army. His name was... Seliph.”
—Opening Narration

Inheritors of Light is Chapter 6 of Fire Emblem: Genealogy of the Holy War.

This chapter's flow is fairly straightforward. Depending on how well you have planned the development of your children characters, this chapter tends to be very basic. This is the first chapter of the second generation, so Seliph is now the main Lord character. The first thing that should be done is to save your game, then restart. The reason for this is that there is a glitch in the game that only gives Seliph 2 Leadership Stars, but after doing this he will possess 3 from this point forward. Have Larcei, who should have a Brave Sword, deal with some of the enemies while also allowing Scáthach do the same, especially if Lex was their father. Both of them will level up fast on this chapter, which will help a lot in the long-term. This can be considered an important objective, as they can be very powerful units for your army, provided that they use this chapter as an opportunity to level up. Any bit of HP lost should be healed by Lana as she is a very low level right now. It will help her gain levels by healing everyone as often as possible. Oifey, Diarmuid and Lester will join you soon after the beginning of the chapter. This part of the chapter is easy overall, but be careful nonetheless. Once Harold is down and his castle is captured, Julia will join up with you, followed by Arthur and Fee, who will appear near Sophara. Have Arthur get some exp by killing the defenseless axe fighter guarding Sophara while Fee cleans up the bandits attacking nearby villages.

Iuchar and Iucharba will appear, with Iuchar defending Isaach Castle and Iucharba commanding Sophara Castle. The brothers will charge at you, but their units are fairly weak. The player may talk to either Iuchar or Iucharba with Larcei/Creidne, but only one can be recruited. Upon recruitment, the recruited brother's units will become allied units and the un-recruited brother will become an enemy. Note that the allied grunt units won't be terribly helpful unless you need them to distract the other brother's units, so you can kill them before recruiting their leader if you like. The tome Seliph gives Julia depends on whether the player conquers Sophara or Isaach first. If the player captures Sophara first, Julia may talk to Seliph to receive Aura. If the player captures Isaach first, Julia may talk to Seliph to receive Nosferatu. It is highly recommended to have Julia receive Nosferatu, as it will let her become a more useful combatant. Make sure Julia does not fall behind in levels, as she is all but indispensable for the Final Chapter. Note that the village northeast of Isaach, behind the forest tiles, contains a Skill Ring, so be sure to rescue it before the bandits destroy it. The village northwest of Isaac, while containing no special items, will play a special comedic scene if Seliph is the one to visit it.

After you recruit one of the brothers, Schmidt will begin moving toward you. You should be cautious of him; he has the same Brave Axe Lex had, and he can do major damage with it. His grunts all carry hand axes, so be mindful of their range. It is best to have Lana use Sleep on Schmidt if she has it, mop up his grunts, and then have Iuchar/Iucharba defeat him to ensure that he gets the Brave Axe. Note that Schmidt will return to Ribaut and bring back a second squad of knights, once again wielding hand axes, if his first squad takes sufficient casualties. You can either stop him from doing this or let him do it if you want the exp. After Schmidt is dead, all that's left is Danann. Danann has no ranged weapons and heals around 10 HP per turn, meaning that you can grind out huge amounts of exp for any of your ranged units by having them attack him without killing him. Have your ranged units level up to your heart's content, and then finish off Danann.