The Ink Painting can be considered the scroll's version of the Venge weapon set. However, the Ink Painting drops the user's Magic and Skill by 2 after every battle it is used in, and cannot double opponents. 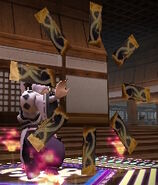