Innes' Bow (ヒーニアスの的弓 Hīniasu no matoyumi, lit. Heanius' Sure-bow in the Japanese version) is a bow in Fire Emblem Awakening. Eponymously named after the character of the same name from Fire Emblem: The Sacred Stones, this bow, like its Japanese name suggests, is very accurate, a fact that is offset by its limited Durability. 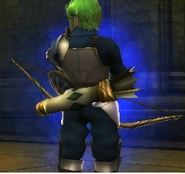