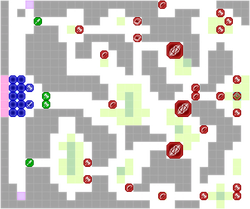 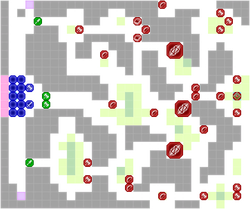 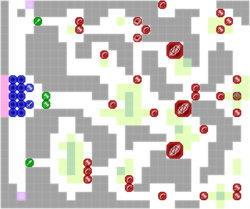 Byleth, Edelgard, and 10 others

Chapter script
[view]
“As Edelgard works to reorganize the army after merging with alliance troops, she receives and urgent message from Duke Goneril, whose forces guard Fódlan's Locket”
—Opening Narration

Insurmountable is Edelgard's Paralogue in Fire Emblem: Three Houses. This chapter takes place in Fódlan's Throat, and is only available on the Crimson Flower route after beating Chapter 14.

This is one of the most difficult paralogues to defeat using conventional strategies, especially on the higher difficulties. Almyra has read the strategy guide that Wyvern Lords and Bow Knights are very good, so if you hold back and defend, you'll have to deal with an onslaught of units with absolutely massive threat range, making it very difficult to safely position your units. As usual, fliers are very useful for maneuvering quickly around this gap and forest filled map if you choose to try to defeat everything, but be ready with the "Dismount" command if there's a Bow Knight in range of where the flier ends up, which there probably will be.

Some allied Goneril soldiers dot the map at the beginning of the mission, but their presence is meaningless as they immediately withdraw before turn 1.

The weakness in the Almyran army lies in their lack of weapon diversity. Aside from a couple of tome users, all of their units use either axes or bows. Bringing sword-wielding units with Axebreaker and tome users with Bowbreaker significantly reduces their threat potential. Bringing some archers is also a solid answer to the sheer number of flying units on this map. Putting a high avoid unit (Ferdinand is a good candidate for this) with an Evasion Ring, Alert Stance, and/or Sword Avoid +20 in a thicket effectively ties up dozens of enemy units, while the rest of the army can maneuver around enemy clumps to kill off stragglers. Having a strong unit or two guarding the entrance is still useful for picking off the occasional wyvern rider that tries to make a dash for the objective.

Three units with stat boosters dot the sides of the map, and only characters with the Steal ability can grab them. Killing two of these units stops half the wyvern reinforcements from spawning. Killing the wyvern lord with the energy drop and the wyvern lord with the seraph robe halts the reinforcements from the northeast and south-east, respectively. After stemming the flow of wyvern riders, mopping up the rest of the enemy force is easy in comparison. Nader himself is unremarkable for a boss unit: while he is on a healing tile, he is hampered by the forests surrounding him compounding his axe class's inherent inaccuracy, and sufficiently speedy thieves can steal his Aurora Shield off of him. As he doesn't move, and only has 1-2 range, any character with three range or more can attack him without fear of retaliation.

If you're okay with missing out on the items to steal, a more sanity-preserving way to win is just to immediately try to complete the objective of defeating Nader rather than withstanding the onslaught. Nader is a physical defense tank, but his magic defense is very bad. The safest and easiest way is to move up to the center of the map using Stride on turn 1, then go for a turn 2 victory with a long-range magic user and another Stride use. Warlock Dorothea with 2 Meteors and a Dancer to let her Meteor twice on turn 2 is probably the safest way. Hanneman also packs Meteor if you've built him but not Dorothea. If you want to get up-close and personal, Linhardt's Warp spell on turn 2 can help a Stride'd mage also get in range of Nader (Lysithea as well, if you recruited her). If you're set on stealing the Aurora Shield, Warp can also be used on a thief to set up that steal before raining magical flaming rocks on Nader.