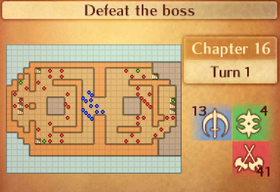 Xander (Automatic from start)
Shura (End of chapter, if spared)

Chapter script
[view]
“Nohrian and Hoshidan forces meet in all-out-war. Corrin sets out to lead the vanguard but instead must defend the Nohrian war chest from Hoshidan Ninja.”
—Opening Narration

Invasion (白夜侵攻 Byakuya Shinkō lit. Invading Hoshido in the Japanese version) is Chapter 16 of Fire Emblem Fates in the Conquest Version. This chapter takes place in the Nohrian Sea.

Warning: This is the only time in the Conquest route where a potential recruit can die permanently, besides Mozu.

Upon starting this chapter, you are given 10,000 gold as a "gift" from Iago. In addition, Xander also joins you permanently. At the start of each player phase, the enemy ruffians will take 300 gold. Whatever you are left with upon defeating the boss is yours to keep.

There are a good amount of non-promoted enemies on the map, though there are also a few promoted ones to deal with. In addition, four allied Lancers are on the ship. The enemy does not attack them, nor will the Lancers attack the enemy if one gets into their range. To find the boss, you need to speak with the Lancers, as stated before the battle begins.

There is no set position for the boss to hide in; instead, the boss is automatically the last Lancer that is not spoken to. Therefore, you can manipulate where the boss will appear to easily swarm him by speaking to the Lancers that are in bad/far positions before closing in on the easier ones.

After the chapter ends, you are given the option to kill or spare Shura (the boss). If you spare him, he will join your army. If you kill him, you will get a pair of Boots instead. This is the first pair of Boots you will obtain in Conquest, barring DLCs and BP/VP rewards. The next pair of Boots will appear in Chapter 23.

This applies on Lunatic Mode: