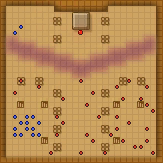 Chapter script
[view]
“Robin and Basilio turn the tables on Validar with a brilliant deception. The "hierophant" reveals him/herself to be Robin's future self.”
—Opening Narration

Invisible Ties (運命か、絆か Unmei ka, Kizuna ka lit. Fate, or Bonds in the Japanese version) is Chapter 23 of Fire Emblem Awakening. This chapter shares its name with the Premonition of the same name. Both Chrom and Robin are required for this chapter. This chapter takes place in The Dragon's Table.

In the first half, the map is split into two parts by a wall that cannot be passed through; the top portion which Chrom and Robin fight Validar, like in the Premonition version of this map, and the bottom which all other units brought into the battle fight Grimleal members. The Rescue Staff cannot be used during this half of the chapter. However, the Mire tome can still hit Validar through the barrier, allowing the player to hit him with characters other than Robin and Chrom. After defeating Validar, a short cutscene occurs and then the second half occurs.

In the second half, the wall separating Chrom and Robin from the rest of the army will break and Validar will warp away from his original position to where his cult members are. Basilio and Flavia join in during this half.

Before starting this map, make sure that Robin is properly trained. If for some reason, they have not been used, train them now as this is the last map in the game that they must be used. Chrom should also be in fairly good shape this point, given his mandatory usage in every map so far. It is also a good idea to have Robin and Chrom at their highest support rank possible at that point for the best results, as there may or may not be enough time to revert or it may take up a precious move that could be spent attacking.

There are two initial sections on this map similar to the duel between Ike and Black Knight in Fire Emblem: Radiant Dawn's Rebirth 2 map. As with the premonition version of this map, Chrom and Robin will start off on the top half by themselves while the rest of the army battles other enemies in the south portion. No unit can pass through the "wall" set up in the middle of the map so Chrom and Robin will face Validar alone unless a Dark Mage related unit is using Mire. If Chrom or Robin is a mounted unit with Boots, they can potentially take Validar down in 1 turn. He's fairly weak in this phase and should put up little resistance. If they can't take down Validar in 1 turn, the other units will need to deal with the Grimleal surrounding them. Assassins, Generals, and Heroes can be problematic for their dodge, Defense, and skill respectively. Deal with them with caution to prevent losses in the army. Fortunately the units on the southwestern part of the map will not move, unless an aggressive use of Galeforce to try and rush the southeastern portion is the plan. Once Validar has been defeated, a cutscene and some dialogue will play before the second phase begins.

Validar's attempt to isolate Chrom and Robin fails, so he shatters the barrier and will then warp to the southeastern portion of the map amongst his Grimleal followers. Flavia and Basilio will join the army once this phase starts, and the two are very good units. However, both will need to avoid the Sorcerers due to their low resistance. Their weapon ranks and starting equipment make them perfect to take down all other enemies; Basilio focusing on the Generals with his Hammer and Flavia focusing on the Assassins with her superb skill and speed. Flavia is worth considering giving Balmung from the previous chapter, as her weapon rank will allow her to use the sword and with Armsthrift she might not use a single point of durability. Basilio also works extremely well with Helswath, but he does not have Armsthrift, so it will be worn down quickly unless a staff user with Hammerne is on hand.

Dealing with the generic Grimleal members should be no trouble at all unless on a higher difficulty. Validar, on the other hand, gains a good boost in stats in this new position, more so the higher in difficulty the player is playing in. On Normal mode, Validar isn't particularly difficult and can be dealt with swiftly aside from a few unlucky misses due to Anathema. On Hard mode, he becomes much more lethal with Vengeance, where he can stack damage received and deal devastating damage in return, especially to those with low resistance. He also has Dragonskin which will halve all damage received, pairing well with Vengeance. Lunatic seals the coffin with Rightful King to always activate Vengeance and Renewal which will preserve him to maximize his Vengeance and Dragonskin combo. Once he's finished, rout the remaining enemies (if there are any left) and the battle will be won.

Alternatively, the player can have Chrom and Robin wait outside of Validar's attack range in the first phase, and allow the other units to defeat all of his Grimleal followers. This makes the second phase far easier on higher difficulties, as Validar will then be the only unit left standing. If your units on the bottom half of the map require assistance, then defeat Validar so Chrom and Robin can help them.