Negates weapon effectiveness bonuses against its holder
[view]
“A shield that negates bonus damage to the flier who carries it.”
—In-game description, Shadow Dragon

Iote's Shield (アイオテの盾 Aiote no tate) is a shield exclusive to the Archanea Series of Fire Emblem, named after Macedon's founder Iote. In its original appearance in Mystery of the Emblem, Iote's Shield negates all weapon effectiveness bonuses against its holder, similar to the Full Guard that later appears in Path of Radiance.

In Shadow Dragon and New Mystery of the Emblem, however, Iote's Shield only negates the weapon effectiveness bonuses that Bows and Wind magic wield against Flying Units, making it similar to the Delphi Shield that debuts in Binding Blade and the Fili Shield of Sacred Stones

Iote's Shield returns in Fire Emblem Awakening, where, instead of being effective as long as it is in the unit's inventory, it assigns the skill of the same name to its user. It is acquired from every completion of the DLC chapter Smash Brethren 3. 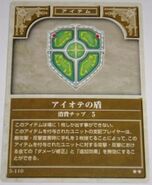