Varies
[view]
“An affordable axe that is easy to wield.”
—In-game description, Shadow Dragon and New Mystery of the Emblem.

The Iron Axe (鉄の斧 Tetsu no ono) is one of the most basic of the standard Axes recurrently appearing across the Fire Emblem Series. Not particularly favoured for its relatively low Accuracy as compared to its other iron counterparts in other weapon categories, this flaw can be compensated for should it be wielded in the hands of a unit in possession of fairly high Skill.

In Fates, the Iron Star Axe (鉄の投撃斧 Tetsu no tōgeki ono, lit. Iron Throwing Axe) is the enemy-exclusive variant of the Iron Axe.

Official artwork of the Iron Axe from the TCG.

The Iron Axe, as it appears in the fifth series of the TCG.

Boyd wielding the Iron Axe in Path of Radiance. 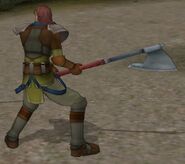 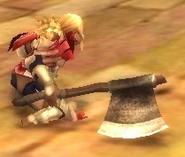