The Iron Blade is a Sword that debuted in Fire Emblem: Genealogy of the Holy War.

The Iron Blade is a powerful, yet heavy and inaccurate Blade-type Sword. Owing to the weapon's heavyweight nature (in accordance to its status as a Blade weapon), it is thus advised to equip it on characters with higher Constitutions, such as those who are of the Mercenary, Cavalier, and Paladin classes - All of which will be able to wield the sword without suffering from severe Attack Speed penalties.

This sword is analogous to its two "great" counterparts: The Iron Greatlance and the Iron Poleax.

Official artwork of the Iron Blade from the TCG.

The Iron Blade, as it appears in the first series of the TCG. 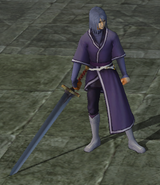 Zihark wielding the Iron Blade in Path of Radiance. 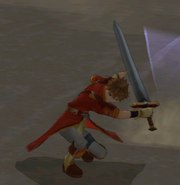