Varies
[view]
“An affordable bow that is easy to wield.”
—In-game description, Shadow Dragon and New Mystery of the Emblem.

The Iron Bow (鉄の弓 Tetsu no Yumi) is, in a majority of the Fire Emblem titles, the most rudimentary Bow. Commonly employed by both player and enemy Archer-based units alike, the Iron Bow is highly favoured for its low Weight, a fact that complements said units' characteristically low Con by significantly reducing any Attack Speed penalties that they may sustain from equipping the weapon.

*Only if Kris's base class is that of the Archer.
**Only if Gordin is recruited in the Prologue.
***Only in their respective Shin Archanea Senki chapters.

Official artwork of the Iron Bow from the TCG.

Concept artwork of the Iron Bow from Path of Radiance.

The Iron Bow, as it appears in the fifth series of the TCG. 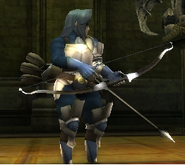 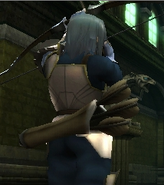 The quiver of the Iron Bow attached to Virion's back in Awakening. 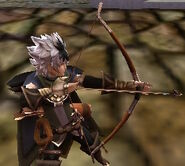 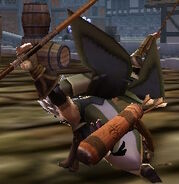 The quiver of the Iron Bow attached to Shura's back in Fates.