-
[view]
Iron Knight (アイアンナイト Aian'naito) is a class introduced in TearRing Saga: Utna Heroes Saga.It is both a mounted and armored class.

Iron Knight is an alternate promotion for Norton the Knight, making him the only playable unit of this class.

Iron Knight is comparable to General in stats, but it has noticeably more movement when mounted. While its strength and defense are equal to General, its speed and skill stats are both several points lower then General. When dismounted, Iron Knight has a few small stat reductions and most notably loses movement, but keeps its formidable defense stat.

The class is comparable to the Fire Emblem: The Sacred Stones incarnation of the Great Knight class as it is counted both as an armored and as a horseback unit.

Iron Knights wear a barbute-style helmet that obscures their eyes. Apart from this, the uniform of the rider is identical to the Armor Knights of TearRing Saga. Dismounted Iron Knights move and fight in the same manner as Armor Knights.

The Iron Knight’s steed is covered in similar armor around its body and even some on its legs. Due to their heavy armor, Iron Knights advance slower then other mounted classes and the rattling of metal is heard as their horse moves. 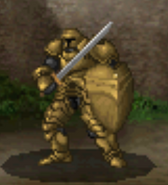 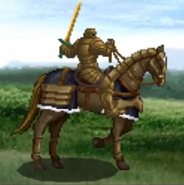