Varies
[view]
“An affordable lance that is easy to wield.”
—In-game description, Shadow Dragon and New Mystery of the Emblem.

The Iron Lance (鉄の槍 Tetsu no yari) is a Lance that recurrently appears across the Fire Emblem series. Commonly wielded by lance-based class lines like that of the Cavalier and the Knight, this lance is markedly more accurate than its steel and silver counterparts, although it is inferior to the lighter Slim Lance in this department. This lance is good for breaking down walls with high HP due to their low cost and high Durability.

*Imbued with a bonus of 1 point to its Critical rate.

Official artwork of the Iron Lance from the TCG.

The Iron Lance, as it appears in the fifth series of the TCG.

Artwork of the Iron Lance, as it appears in TearRing Saga: Utna Heroes Saga. 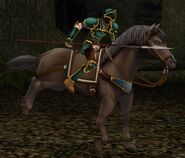 Oscar wielding the Iron Lance in Path of Radiance. 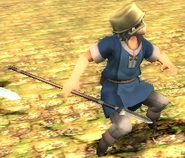