Ratana
[view]
“I mean no disrespect... but do understand I take great pride in being a warlock of Friege. With the murder of my parents and my brother... it pains me to sit here doing nothing. Please allow me to fight!”
—Ishtar to Julius in the Final Chapter of Genealogy of the Holy War

Ishtar is an enemy character from Fire Emblem: Genealogy of the Holy War. She is the daughter of Bloom and Hilda, as well as the sister of Ishtore. She is also the cousin of Arthur, Tine, Amid, and Linda, the niece of Tailtiu and Ethnia, a granddaughter of Reptor, and a distant relative to Victor, Arvis, Azelle, Julia, Saias, and Julius, with Julius being her lover.

During her childhood, Reinhardt was assigned to be Ishtar's personal guard. While he became the first in command under her to the Gelben Ritter, she became a very powerful mage who is widely known for her skill with thunder magic.

Despite her mother's cruel treatment of Tine/Linda, Ishtar did not treat her with disdain, and instead did her best to comfort her in her times of need.

Some time before the Liberation War, Ishtar and the Imperial Prince Julius of Grannvale fell in love with each other. Her mother was very pleased with this relationship, as she wished to benefit from their union. After Julius received the Book of Loptous, he murdered his mother and tried to kill his sister, but his love for Ishtar never changed. Despite knowing what happened to him, she remained loyal to him and continued to love him. However, once he began performing the child hunts, she became shocked and attempted to convince him to stop. After Julius ignored her protests, Ishtar began to work with Emperor Arvis to secretly free the captured children.

Soon afterwards, while she and Julius are in Conote, he comes down with a high fever. She becomes very worried about him and travels to Leonster Castle to ask Bishop Saias to cure Julius of his illness. Around this point in time, Julius begins to notice Reinhardt's romantic feelings for Ishtar, which makes him extremely jealous and furious. He orders Ishtar to remove Reinhardt from his status, which she reluctantly agrees to, although she also begs Julius not to kill him. Afterwards, Ishtar and Julius travels to Miletos, where Hilda is currently residing.

Around this time, Ishtore and his lover, Liza, are killed by the Liberation Army led by Seliph, who soon recruits Tine/Linda into his army. While Bloom is saddened by both his son's death and his niece's betrayal, he summons Ishtar to Conote and begs her to protect him. Surprised by her father's panicking, Ishtar agrees to his pleas, but asks him to give her the Mjölnir before she leaves to fight the Liberation Army.

After recovering from her wounds, Ishtar is ordered by Julius to send the captured children to Belhalla Castle so that he could sacrifice them. She reluctantly obeys, and after his departure, Hilda reminds Ishtar that she is the best candidate for Julius's affections, urging her to marry him as soon as possible. Following this, she is commanded to travel to Miletos Castle and prepare the children to be sent to the capital.

In Miletos, Emperor Arvis asks Ishtar to free the children. However, Julius soon appears and informs him that she serves only him while also commanding him to leave. After this, Julius informs Ishtar that the Liberation Army had come to Miletos and proposes for them to play a game in which the victor is the first person to successfully kill an enemy soldier. After either of them are defeated or kill someone, they leave the battlefield together and travel to Belhalla.

In the Final Chapter, Ishtar learns that Hilda has been slain in battle against the Liberation Army, and as a result, she asks Julius for permission to lead the Weissen Ritter into battle. While he is reluctant at first, he agrees to it once she declares her love for him. Along with her, she takes the Falcon Knight sisters, Meng, Bleg, and Maybell. Ignoring Tine's pleas for her to stop fighting, Ishtar ultimately dies fighting against the Liberation Army.

Ishtar has a complex personality and appears to be torn between duty and desire. Although she is a major antagonist, she is a kind and caring woman who is not cruel or ruthless in the least. Because of this, she is viewed positively by the people of the Friege region. Despite her undying loyalty to Julius, she is willing to defy his will behind his back, as seen when she helps the children who were captured in the child hunts.

Despite her lack of personal disdain towards them, Ishtar remains persistent in fighting against Seliph. Her love for Julius and her family are major factors that prevent her from defecting to the Liberation Army, despite Tine's efforts to convince her.

As confirmed in Heroes, Ishtar deeply regrets staying with Julius and knows what she's doing is wrong (fighting the Liberation Army). There are few possible reasons as to why Ishtar sides with Julius during Genealogy: either she loves Julius and hopes she can change him or she fears Julius's power and doesn't defect due to her fear. Whilst neither of these theories are confirmed they both have some validity. However, she never openly says she wished she could have fought against the empire.

Ishtar appears to engage the player in battle three different times, specifically in Chapters 8, 10, and the Final Chapter. She is a force to be reckoned with in all three instances.

- In the first two encounters, Febail with the Yewfelle should be able to take her out in one hit. Additionally, if a staff user has a high enough magic stat, the Silence Staff can be used to cripple her. This allows you to attack her without fear of retaliation.

- In the final encounter, it is recommended to use the Forseti user to defeat her, or have Ced with at least 28 magic or more and a Magic Ring to silence her with the Silence Staff.

Thunder Goddess
The heir to Mjölnir, she carries the blood of the royal family of Friege. The descent of her love, Julius, into the darkness troubles her.

Ishtar is yet another quintessential offensive blue mage is comparable to Linde for the role, having only one point less in her Atk, but slightly better physical bulk, meaning that there are a few more match-ups that she can potential survive over Linde. Otherwise, she sports a great offensive stats of 48 Atk and 36 Spd but has terrible physical bulk that makes her crumple against most conventional physical attackers. Ishtar is a fantastic choice for a Blue Mage if looking for one and will provide powerful damage output with a minimal amount of investment.

What separates Ishtar from Linde is her starting kit and base weapon Mjölnir, which not only accelerates her special cooldown, but also has a Darting Blow 3 effect, increasing her Spd by 6 when initiating combat. This allows her to reach an impressive 42 Spd during the player's turn.

In tandem with her innate Swift Sparrow for her Skill A, she reaches an even better 46 Spd plus a nice +4 Atk to give her neutral 52 on initiation. Moonbow is a quick charging special that allows her to ignore 30% of her opponent's Res and thanks to Mjölnir it can charge in a single round of combat. Vantage can save her in a pinch against ranged enemies that she failed to kill during her turn, but it is subjective at best. Odd Attack Wave is an extremely valuable Skill C as it gives her a +6 Atk boost during odd numbered turns, giving her somewhat of an inconsistent, but powerful buff when used properly by the player.

Ishtar is weak to physical units in general, even a handful of Reds. Those who pack Distant Counter are particularly strong counters such as Hector or strong dragons like Myrrh and Fallen Male Robin. High Res units like Deirdre, Yune, and Selkie can easily take a hit from her and retaliate as even her Magical Bulk is lukewarm at best.

Ishtar is perhaps one of the cheapest units to build as Draw Back or Reposition are standard support skills for player team synergy. Luna may have a slightly longer cooldown than Moonbow, but her tome will charge it quickly, essentially giving it the same cooldown as Moonbow on most other units. Desperation is a far better Skill B as she wants to nuke her opponent as fast as possible and if she can safely damage herself into the threshold, there are only a small handful of units who can survive her attacks.

Thunder's Waltz
The heir to Mjölnir, she carries the blood of Friege's royal family. Dances with the power of rolling thunder. Appears in Fire Emblem: Thracia 776.

For a dancer, Soiree Ishtar is among the strongest offensively oriented Dancer units in the game with an offensive spread of neutral 42 Atk/34 Spd. In combination with her Red Tome Flier status, she has superb range and mobility all while having the option to Dance an ally should she not be suited for the current opponent's in range. She does trade this off for low overall bulk and will go down from most enemies that are able to get to her first, but so long as she can remain safely out of danger, she can be a terrifying unit who can multitask supporting and attacking.

Mögþrasir is her weapon and is functionally similar to Dire Thunder allowing her to double attack when initiating combat, potentially quad attacking over her enemies if she has enough Spd. Though she lost 2 Spd off of her neutral 36, it still is at a decent range to launch quad attacks over certain powerful enemies.

She packs Swift Sparrow 3 bringing her neutral offense to 48 and 41 respectively, which synergizes perfectly with Mögþrasir, leaving only a small handful that can potentially survive her attacks. Desperation ensures that, once she is damage, she can unleash her four consecutive attacks immediately, even less units who can retaliate her. Finally Air Orders grants adjacent allies a Flier Formation effect.

Soiree Ishtar is easily defeated by anything who can get to her first as her power is at her weakest when her opponent initiates on her. She is unable to damage most high Res units like Lute, Micaiah, and Selkie who can all easily retaliate through her low bulk. As a flier, a single shot from a Bow user will spell her demise as well.

Soiree Ishtar's only needed skill is Luna or Moonbow as the res shaving will help her secure kills and given her tendency to quad over opponents, she can usually fire it off every single round. Air Orders can be replaced with a plethora of supportive skills to better suit mixed teams or flat out focus on other Flier skills like Hone Fliers and Ward Fliers.

Ishtar is illustrated in the trading card game Fire Emblem Cipher with the following cards: 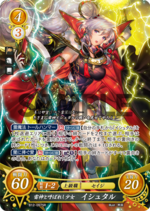 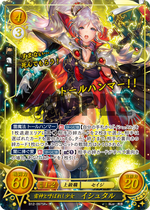 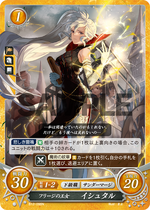 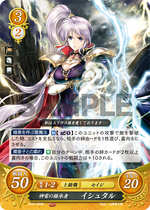 Ishtar was the name of the Assyrian and Babylonian goddess of fertility, love, and war. She had many lovers, but because of her love for them, most of them met some form of misfortune. For example, her love for the god Tammuz led to his death.

It makes sense for Ishtar to be named after the goddess of love and war because of her love for Julius and her prowess on the battlefield. It should also be taken into account that Ishtar is called a goddess by the other people in the game. However, the role of the deity Ishtar and her lovers seem to be reversed in the game because it is Julius’ love for her that leads to her downfall instead of the other way around.