Ismaire is a character from Fire Emblem: The Sacred Stones. Ismaire is the beautiful, and beloved queen of Jehanna, known as the Queen of White Dunes.

She took the throne in accordance with her dying husband's wish; and since she became busy with matters of governance, she could not make enough time for her son who then left the country. During the events of The Sacred Stones, she is killed by Caellach because of her refusal to give up Jehanna's Sacred Stone. It is revealed, shortly before Ismaire draws her last breath, that the missing heir is Joshua.

At the end of Chapter 14, whether Joshua is alive or not, the player will receive the Sacred Twins Audhulma and Excalibur from her.

Ismaire has better growths than most of the secret characters and comes at a lower starting level. However, her starting stats, compared to the other possible Swordmasters, leave something to be desired. She will have decent HP (usually around the low 40's), decent strength (about the same as Marisa's), good skill (close to maxing), decent luck (close to Joshua's luck), great resistance, and poor defense. She is the only secret character able to cap a stat on her own—Skill, Speed and Resistance—although the occurrence is quite rare. She also gives you the exclusive Wind Sword, one of the lightest and quickest swords in the game. Ismaire is one of the better secret characters, but still falls short in comparison to your other units; particularly in the Lagdou Ruins, where durability is all that matters.

Ismaire's artwork from The Sacred Stones.

Ismaire lays dying with Eirika, Seth and her son, Joshua, at her side.

Ismaire's portrait in The Sacred Stones. 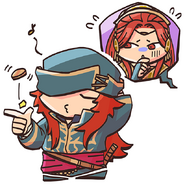