Everyman
Lord (As a Mirage Master)

Chris Patton
[view]
“I should still be able to aim for even higher places...”
—Itsuki Aoi

Itsuki Aoi is the protagonist of Tokyo Mirage Sessions ♯FE and one of the game's playable characters. Being the "Lord" of the game, Itsuki is required to participate in every battle.

Itsuki is an eighteen-year-old (seventeen in the Japanese version) Japanese high school student that lives in Tokyo. A Mirage Master, he comes to form a bond with the Mirage Chrom and works at Fortuna Entertainment. His birthday is July 30.

Itsuki grew up a normal teenager in Tokyo, Japan. He has been friends with Tsubasa Oribe since childhood and is currently classmates with both her and Touma Akagi. One day he is invited to a live idol audition by Touma where he encounters Tsubasa who was among the entrants. During the audition, the emcee presses Tsubasa about her missing older sister who mysteriously disappeared 5 years prior in a mass disappearance at her show. Suddenly, the audition is attacked by malevolent spirits, one of which overtakes the emcee who proceeds to drag Tsubasa through a portal. Itsuki is miraculously freed by an unknown energy and follows them.

The portal leads him into another world where he encounters a young green haired girl, but he decides to focus on rescuing Tsubasa. Itsuki finds Tsubasa being attacked by a red cloaked spirit but soon finds himself attacked by another one. As the spirit restrains him, a ball of light emerges from him which he then shoves into the spirit, purifying it. The spirit thanks him and fends off other while Itsuki goes off to rescue Tsubasa. Like Itsuki, a glowing ball emerges from her which he then shoves into her attacker, purifying it in the process. The two spirits merge with Itsuki and Tsubasa, granting them the power to fend off the other spirits.

After the battle, Itsuki and Tsubasa introduce themselves to the spirits whom they have bonded with, Chrom and Caeda respectively, both of whom are suffering from amnesia. The group leaves the area as it is too dangerous to stay any longer. They soon draw the attention of Fortuna Entertainment, an entertainment agency that not only employs idols and actors, but also select individuals who are able to enter the world Itsuki and Tsubasa just entered, the Idolasphere. Chrom and Caeda are formally introduced as Mirages, spirits from another world with great power. Several attacks on Tokyo have begun, orchestrated by other Mirages. Itsuki and Tsubasa join Fortuna Entertainment to aid them on their mission to stop the attacks by hostile Mirages who siphon Performa from individuals.

If all the side stories are completed, a post-credits scene is unlocked where Maiko returns to modeling and makes Itsuki the new president of Fortuna Entertainment.

Itsuki is described by the game's official website as being honest and responsible, but also quiet and unsociable. Friendly and easygoing, he enjoys the company of his childhood friends Tsubasa and Touma. This later extends to the other Mirage Masters of Fortuna Entertainment. Itsuki's dialogue is determined by the player at certain points during the Main and Side stories, possibly portraying him in slight variations of this personality. His responses can either be forward and honest, brash and bold, slightly awkward, and even flirtatious depending on who he is talking to. Itsuki is a great leader and his fellow Mirage Masters place a great deal of faith in his leadership during battle and while exploring the Idolasphere despite his inexperience in the beginning.

Originally having no real ambitions in life, he finds himself working for Fortuna Entertainment due to his Mirage powers. He does not aspire to be in the entertainment industry like his fellow Mirage Masters, but nonetheless has gained experience as a manager of sorts throughout each of their side stories. Depending on the player's choices, Itsuki can devote a great deal of his time helping out his coworkers, developing strong bonds with them and helping them solve their problems and blocks.

Itsuki can also be considered a smooth talker as he's able to hit on girls very easily, although most of the times he does so unwillingly.

Finding a Path
Young man who battles evil Mirages at Chrom's side. A kindly leader to his comrades. Appears in Tokyo Mirage Sessions ♯FE Encore.

Itsuki is a Tempest Trials reward Sword Infantry unit. For the most part, this is somewhat of a limiting trait as he is unable to receive an Asset and Flaw, locking his stats. What Itsuki brings is most notably his incredible base 37 Atk. His mixed bulk sits at 33 Def and 32 Res, which when combined with his 41 HP gives him a modest ability to take a hit or two when battling enemies. His only somewhat sore spot is his middling Spd which does not allow him to double over many enemies and gets double attacked by a decent portion of the cast, many of whom share his exact same unit combination. While he may not exceed his competition, Itsuki has his strengths in certain situations.
Mirage Falchion is Itsuki's unique weapon which not only grants him a base +3 Def boost, bringing it to 36, but also carries the usual Falchion effect, making him a strong dragon slayer. Itsuki further gains more Atk/Def based on how many of his allies have already acted. Both stats gain 3 additional points plus an additional 2 for each ally that has finished acting, capping at a 7 point boost. At max effect, this means that Itsuki would have 60 Atk and 43 Def, a massive power spike that can demolish most if not all dragons and can take a hit from most physical oriented units with little effort.
Swap allows Itsuki to exchange places with an ally. Sol restores his HP equal to 50% of the damage he inflicted on his enemy when the skill activates. Attack Defense Link gives Itsuki and the unit he uses a movement assist skill, like Swap or Reposition, a +6 Atk/Def visible stat boost. Finally Drive Defense gives Itsuki's allies a +3 Def boost during combat.

Itsuki's Res is just slightly lower than his Def and his weapon does not affect this stat. Most blue mages can deal significant damage to him, especially the likes of Ophelia whose standard loadout can nuke him in a single turn or Reinhardt can easily double attack him with his tome. Distant Counter is a suggested skill for a hyper invested Itsuki usually, so Dazzling Staff users can poke him out while chipping away at his lower magical bulk.

Reposition is a better Assist skill as his has better movement and positioning of allies. Noontime charges much faster than Sol and is a better option for turning Itsuki into a pseudo tank. Bonfire is also a decent option given his impressive Def and can deal 21 true damage when it activates under the full effect of his weapon. Distant Counter allows him to check ranged unit and can even threaten any non-blue mages. If looking to maximize Itsuki's player turn offense, he can take Blade Session from Tsubasa as it will grant him up to +9 Atk/Spd, bringing his player turn offense when used after at least two of his allies have moved and astounding 69 Atk, 39 Spd, and 43 Def unmerged and unaffected by visible buffs. Null C-Disrupt prevents the enemy from being able to counterattack him through Close Counter, stopping some problematic units that commonly run the skill like Kronya, Sophia, and most ranged armor units. Skill C is flexible enough to run a host of skills, through Smoke skills are his best friend for those on a budget like Attack Smoke and Defense Smoke. Those with fodder to spare can give him Pulse Smoke, helping him charge his allies specials if they are withing two speaces whenever he gets into combat.

Itsuki gained a newfound confidence after playing the part of Marth in "Fire Emblem." In the aftermath of the incident, he began to seriously consider a career in show business. After many hardships, and many memorable encounters, he will doubtless continue to shine as an artist.

Itsuki succeeded Maiko as president of Fortuna Entertainment, and though his first days were a shaky start, he grew to lead Fortuna and its members to success and fame. Perhaps this is what Itsuki had truly learned from Chrom and his friends; the leadership and strength of a Lord.

Itsuki Aoi is illustrated in the trading card game Fire Emblem Cipher with the following cards: 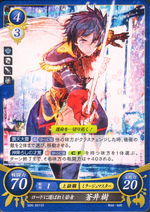 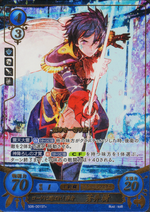 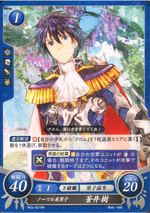 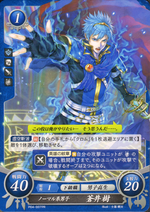 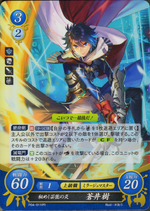 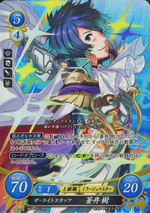 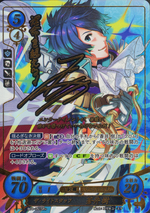 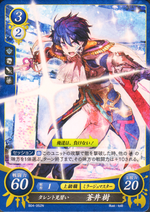 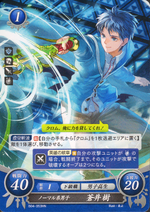 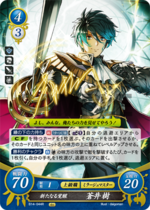 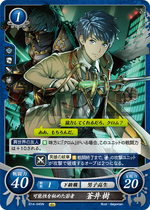 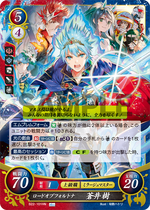 Itsuki's surname, Aoi, is the Japanese word for blue. Blue is also the hair color of most Lords in the Fire Emblem series as well as the color of ally units on the overworld map.