Axe Knight
[view]
“My unremitting love for you is strong enough to cross the bounds of insanity! Let our troops know we’re taking sides with the liberation army! From this day forward we’ll be fighting for love, justice… and Larcei!”
—Iuchar when recruited by Larcei

Iuchar is a character from Fire Emblem: Genealogy of the Holy War. He is the brother of Iucharba and Brian, the son of Danann, the half-nephew of Lex, and the grandson of Lombard. He is in command of Isaach Castle during the second part of the game, whereby he is in love with Larcei/Creidne. He may be recruited by Larcei/Creidne, but doing so will essentially cause Iucharba to continue campaigning against the army out of jealousy.

Iuchar adopts a poetic style in his speech, which may prove to be rather comical in certain situations such as when his soldiers talk behind his back. He shares the same sentiments as Iucharba does, in the sense that they are unable to agree with most of Danann's policies, especially that of the Child Hunts.

Iuchar could also be described as a hopeless romantic, constantly showering Larcei/Creidne with praise and honeyed words, going so far as to order his men to fight in the name of both love and Larcei.

Iuchar is a mounted Axe user that can be recruited near the beginning of Chapter 6. You must choose between him or his brother, Iucharba. Recruiting one of them makes the other impossible to recruit.

Iuchar is generally an easy pick over his brother for one simple reason: he is mounted, and thus has much higher Movement. This is particularly important if you are doing a ranked run as Iucharba's inability to keep up with your other mounted units will render him virtually useless. While Iucharba starts off with slightly superior base stats in most categories, they will both wind up pretty much statistically identical later on. After Promotion, Iucharba will wind up slightly better in combat situations than Iuchar due to his Charge skill and access to Bows, while Iuchar gets more Movement and his Vantage skill is not as useful generally. This hardly matters since the difference between the two is negligible and neither of them are particularly great combat units compared to other units in the second generation unless compared to Substitute characters.

Iuchar is a good character to give the Pursuit Ring to, as none of the second generation characters particularly need it if paired correctly. His high speed growth will let him activate it consistently against axe or lance wielding units. However, as the pursuit ring is fairly expensive and he can obviously not inherit it, it might take some time for Iuchar to acquire enough money to buy it from the pawn shop since he does not start with a lot of Gold.

Despite losing to his brother in combat prowess by a narrow margin, Iuchar's mobility counts for a lot more in Genealogy of the Holy War since the maps are very large and foot units are often left trailing behind. Should you choose to recruit Iuchar, his surviving Axe Knight units of Isaach will become NPC Allies after his recruitment, including Isaach Castle and the Axe Knight guarding it.

In Chapter 6, Larcei/Creidne may speak to Iuchar and recruit him, but if this is done, Iucharba may not be recruited.

In the Final Chapter, if Iuchar is in love with Larcei/Creidne, she may speak to him, and he will gain three points of strength.

Iuchar: Larcei... My beloved, how I've yearned for this day to come.
Larcei: Iuchar, what in the world are you talking about? Did you whack your head or something?
Iuchar: Your words soothe like a bird's song... Your eyes sparkle like stars in the sky... The thought of being without you I cannot bear.
Larcei: Stop! You're grossing me out! You're on the battlefield, you know. Don't lose it here!
Iuchar: My unremitting love for you is strong enough to cross the bounds of insanity! Let our troops know we're taking sides with the liberation army! From this day forward we'll be fighting for love, justice... and Larcei!

“Heheheh... Nobody can defeat me. To die by my hand, you should feel flattered.”
—Battle quote as an enemy
“W-wait, Larcei. Please! It's not possible for me to fight you!”
—Battle quote against Larcei

Vs Iucharba
Iuchar: Sigh... Iucharba... It makes me sad to have a little brother as foolish as you.
Iucharba: You're the foolish one, but that's irrelevant. I knew that this day would come sometime! Now let's finish this!
Iuchar: As you wish!

Iuchar is illustrated in the trading card game with the following cards: 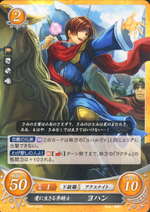 Iuchar and his brother Iucharba derive their names from Irish mythology. Tuireann had three sons with his daughter Danand (Danann), which included Brian (Brian), Iuchar (Iuchar) and Iucharba (Iucharba), who killed Lugh's father Cian. After Lugh took his revenge by killing the three brothers, Tuireann wept over their graves.