Axe Fighter
[view]
“My father wants me to attack? That'd be Larcei's army. Damn, what should I do...”
—Iucharba

Iucharba is a character from Fire Emblem: Genealogy of the Holy War. He is the brother of Iuchar and Brian, the son of Danann, the nephew of Lex, and the grandson of Lombard. He is in command of Sophara Castle during the second part of the game, and much like Iuchar, is in love with Larcei/Creidne. He may be recruited by Larcei/Creidne, but doing so will essentially cause Iuchar to continue campaigning against the army out of jealousy.

Iucharba may be more hotblooded and straightforward than the chivalrous Iuchar is, but they both share the sentiments, in the sense that they are unable to agree with most of Danann's policies, especially that of the Child Hunts.

Iucharba is a bit more controlled than his brother when it comes to Larcei, however, as she is very happy about him changing side, unlike Iuchar, who unnerves her due to his insistence. Also Iuchar seems to join mostly for Larcei but Iucharba also joins to make amends, showing a nobler side.

Iucharba is an Axe user that can be recruited near the beginning of Chapter 6. You must choose between him or his brother, Iuchar. Recruiting one of them makes the other impossible to recruit.

Unfortunately, there is not a whole lot of reason to pick Iucharba over Iuchar. This is particularly true if you are doing a ranked run, as Iucharba's low Movement will severely limit his usefulness. There can be some secondary benefit in choosing Iucharba, in that Julia will have an easier time obtaining the Nosferatu Tome (which is generally considered superior to the Aura Tome). However, the Nosferatu tome is technically obtainable even should you choose to recruit Iuchar. Beyond that, while Iucharba has slightly superior base stats in most cases, his growths are slightly worse. Both brothers will wind up statistically similar in the end, with Iuchar winding up with more Speed and Iucharba having more Skill. Iucharba's Charge is generally better than Iuchar's Vantage because Iucharba's high HP and good Speed base gives him fairly good odds of activating the skill (though the heavy Weight of Axes significantly lowers that chance). Once Iucharba Promotes, he gets even more benefit from the skill as he will get access to Bows and the ability to trigger Charge without being counterattacked, where his brother can only ever use Axes and cannot really get a lot of use out of Vantage.

Despite edging his brother out in overall combat proficiency, it is not by enough to make up for the wide gap in mobility. All things considered, both brothers are relatively weak in comparison to the units of the second generation (unless compared to substitute characters) as they lack staple offensive skills like Pursuit or Adept. Should you choose to recruit Iucharba anyways, his surviving Fighter units of Sophara will become NPC Allies after his recruitment, including Sophara Castle and the Fighter guarding it.

In Chapter 6, Larcei/Creidne may speak to Iucharba and recruit him, but if you do this, you will be unable to recruit Iuchar.

In the Final Chapter, if Iucharba is in love with Larcei/Creidne, she may speak to him, and he will gain three points of strength.

Iucharba: Larcei! So you finally broke down and came to see me.
Larcei: Hmph. Iucharba, you've got your rough image to protect, but you can't be all that bad. At least, I was relieved that you never hurt any of the women or children. I wish we didn't have to fight...
Iucharba: Yeah. Well, I was never into pushin' people around like my brothers. And I've had about all I can handle of the Lopto Sect. People say they've been sacrificing children right here in Isaach. My father just lets them walk all over him. I've had it with them! Larcei... just say the magic word and my squadron and I'll join up with you.
Larcei: Are you serious!? Iucharba, you're wonderful! ...I definitely had it wrong about you all this time.
Iucharba: Yeah, well, I'm no angel. This is my chance to make amends. You lot! From this point forward we are an army of liberators fighting for love and justice!!

Iucharba is illustrated in the trading card game with the following cards: 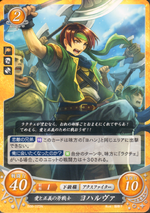 Iucharba and his brother Iuchar derive their names from Irish mythology. Tuireann had three sons with his daughter Danand (Danann), which included Brian (Brian), Iuchar and Iucharba, who killed Lugh's father Cian (Quan). After Lugh took his revenge by killing the three brothers, Tuireann wept over their graves.