Summoner
[view]
“Dare not speak to me that way again. My work is humanity's greatest triumph...Depraved? Ha!...Show them the meaning of genius! Come, my children, defend me! Come, my Feral Ones!”
—Izuka

Izuka is also a mad scientist; he created the elixir that turns laguz into Feral Ones. At one point, he tries to feed a sample of the elixir to Muarim, who was saved by Rafiel shortly before the transformation finished. Izuka wields the most powerful dark tome in the game, Balberith. He is the boss of Chapter 4-5 in Radiant Dawn. He drops Balberith when defeated, but he can summon four enemy laguz per turn and uses the Rewarp staff to avoid enemy units, making defeating him difficult.

Izuka makes his first and only appearance in Chapter 28: Twisted Tower, where he is shown to be in charge of the Tower of Gritnea, the place where he conducted the experiments that resulted in the creation of the Feral Ones. Upon hearing that the Crimean army is approaching, he orders the demented Laguz to be released, and then promptly makes his escape. He is never seen again in the game.

Izuka reappears in Chapter 1-5, where he is introduced as Pelleas' adviser and caretaker. Pelleas explains that Izuka is the one who revealed his lineage to him and reunited him with his mother, Almedha. Because of this, Pelleas' loyalty to Izuka is unwavering. At first, Izuka is extremely hostile to both Sothe and Micaiah, but appoints Micaiah commander of the Daein Liberation Army upon discovering that she is the famous Silver-Haired Maiden. Sothe is well aware that Izuka only wishes to use Micaiah's popularity to rally the people of Daein behind Pelleas, but goes along with Micaiah's decision to accept Izuka's offer regardless.

Throughout Chapters 1-6 and 1-7, Izuka proves to be a very poor strategist, first planning an attack that would have turned out to be suicidal were it not for Micaiah's gift of farsight, and then by planning to poison the water supplies of a prison despite the fact that this would likely result in the death of the very prisoners the Liberation Army intended to free.

In Chapter 1-8, Izuka vehemently opposes Micaiah's decision to rescue the citizens that Jarod is planning to execute, fearing the massacre to be a set-up meant to draw out the Liberation Army. Eventually, Pelleas gives Micaiah his permission to proceed, much to Izuka's frustration. He later tampers with Muarim's food, feeding him the elixir that turns Laguz into Feral Ones. Fortunately, Muarim is saved in the nick of time by Rafiel's Galdr of Rebirth. Both Sothe and Tormod are revolted by Izuka's action, but Pelleas refuses to punish Izuka, causing an enraged Tormod to storm out of the tent.

In the epilogue of Part 1, it becomes obvious that Izuka has grown resentful of Micaiah's growing influence on the troops. When Jarod begins bombarding Nevasa in a last act of defiance towards both the Dawn Brigade and the Begnion Senate, Micaiah once again sets out to fight the Occupational Army, only for Izuka to forbid her from doing so. Izuka accuses her of plotting to steal the throne of Daein from Pelleas, which enrages Sothe. Pelleas breaks up the argument by agreeing with Micaiah and personally orders the Liberation Army to rush to the besieged capital's help. Pelleas is then crowned King of Daein following Jarod's defeat.

The same day, Izuka tricks Pelleas into signing a blood pact with Lekain, for whom he had been working the entire time, thus bending Daein to the will of the Begnion Senate. It is later revealed that Izuka vanished without a trace shortly after Pelleas' crowning. While Almedha suspects that his disappearance is the work of people trying to throw Daein into disarray, he had in fact been kidnapped by Volke at the behest of Bastian. The latter was desperately searching for a way to cure Duke Renning, who had been fed the elixir that turns Laguz into Feral Ones during the Mad King's War. Izuka thus spends the vast majority of the game in custody at the castle of Fayre in Crimea, where he undergoes a lengthy interrogation by Bastian. Eventually, Izuka offers to make an antidote in exchange for his freedom, but Bastian refuses, not willing to let him roam free.

After Ashera's Judgement hits Tellius, Bastian joins the Hawk Army in Chapter 4-5, bringing Izuka and Volke with him. Unfortunately, Izuka escapes, prompting a frantic chase that culminates in a battle in which he summons waves of Feral Ones to defend himself, to no avail as he ends up slain by the Hawk Army.

Over the course of Part 1 of Fire Emblem: Radiant Dawn Izuka exhibits a complete lack of empathy and is extremely selfish and egoistic. His lack of empathy is displayed by the fact that he sees nothing wrong with turning human beings into mindless beasts to "sacrifice" on the battlefield, was perfectly willing to poison a prison's water supplies regardless of the numerous innocents it would kill, tried to turn Muarim into a Feral One, and would have let many defenseless Daein citizens die in the execution orchestrated by Jarod if not for Micaiah stepping in. He displays his narcissism when he refers to himself as a genius and calls his vile work "humanity's greatest triumph", and his extreme self-centeredness as he throws a tantrum when Micaiah's strategy is preferred over his and feels that Pelleas, of all people, is the one who betrayed him for preventing him to turn Muarim into a Feral One, in spite of the fact that Izuka was working for Lekain and planning to enslave Daein the entire time and never cared about the kingdom at all.

He also appears to be very cunning, bending the nation of Daein to the will of the Begnion Senate through his schemes. His character epitomizes the phrase "the ends justify the means," although the ends which he strives for are generally as despicable as the means they might justify. His magic is evidently very advanced, but also seems corrupted. An example is his Flare skill (observable only by hacking), in which the light which surrounds him is more intricate as well as blue and purple instead of gold.

Izuka is illustrated in the trading card game Fire Emblem Cipher with the following cards: 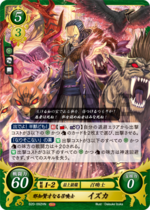 Artwork of Izuka in Fire Emblem 0 (Cipher) by Daisuke Izuka.

Izuka as a Summoner in Fire Emblem 0 (Cipher).

Izuka's portrait in Path of Radiance.