The Kingdom of Izumo (イズモ公国 Izumo Kōkoku lit. Principality of Izumo in the Japanese version) is a nation on the southeastern coast of the continent in Fire Emblem Fates.

Known as "the kingdom of the gods", Izumo is a verdant, peace-loving country renowned for its healers. It is located south of Hoshido and the lands of the Wind Tribe, and north of Mokushu. Izumo maintains only a token military force and consequently has a long-standing reputation for neutrality in other nations' conflicts, but is on friendly terms with Hoshido. Despite Izumo's status as an independent kingdom, it is ruled by an archduke rather than a king.

After Ryoma and Takumi disappeared following a battle against a Nohrian army on the Izumo border, Corrin journeyed to Izumo to find them. Their party was welcomed into Archduke Izana's manor, where Izana offered Corrin and Sakura into a lounging room. It is shown immediately when they enter that "Izana" was the Nohrian mage Zola, and prepared to execute them. However, he is quickly stopped by Hinoka and the others after the princess thought that Izana would never act eccentric due to his royal status.

Once Zola's forces were defeated, the real Izana, who turned out to be just as eccentric as Zola's impression, was found and freed. He explained that shortly after the battle on the border, Nohrian forces had stormed his manor and locked him away so they could set up the trap for the Hoshidans. Corrin declined the archduke's offers of refreshment, seeking to return to the search for Ryoma and Takumi. As a descendant of the First Dragons, Izana had the power to commune with them and read fortunes. Izana failed to locate the missing Hoshidan royals, but confirmed to them that they were still alive. The Hoshidans left Izumo and headed for Mokushu to continue their mission.

After defeating "traitorous" Mokushujin forces led by Kotaro, Corrin and their Nohrian siblings decide to stop at Izumo to take a well deserved rest. Upon arriving though, they find the Hoshidan siblings there. With the war going on, both groups are aggressive towards each other until Izana arrives and stops them. He takes their weapons, since Izumo is a neutral country. Both groups agree to Izana's terms and give their weapons to him.

Corrin later speaks with Xander privately when Ryoma comes in and tries to talk to them. He is unable to though, as Izana soon appears and apprehends him. With Ryoma gone, "Izana" reveals himself as the Nohrian mage Zola and tells the two that he is doing them a favor by helping Nohr win the war. Xander, disgusted by Zola's dishonourable actions, decides to go after him with the help of Corrin and their army.

With the battle over, Leo kills Zola for his despicable actions and also to ensure he would be unable to leak the events to Hans, Iago or Garon. The real Izana is found and freed, who was just as eccentric as Zola's impression, which surprises everyone except Elise. The Hoshidan siblings, also having been freed, do not thank the Nohrian siblings due to the war and their views toward each other. Izana then hosts a large party, with both sides participating and uphold Izumo's pact of neutrality. After the party, both sides leave peacefully.

Corrin and their small group head towards Izumo after Fuga redirected them there to learn more about the Seal of Flames. Upon arriving, Izana greets them and asks them to stay. Corrin declines his invitation for a feast and Izana states that he does not know anything about the Seal of Flames. Gunter suddenly comes in and reveals that "Izana" is actually the illusionist mage Zola, having seen through his magical tricks. Zola then uses Garon's ice bomb to conceal the village in ice, forcing Corrin and their army to go slowly to avoid enemy ambushes.

After the battle, Zola runs and takes Sakura as a hostage to ensure his own survival, but is killed by Leo, who just came to kill Zola for his disgraceful action before leaving. The group then finds Izana, Takumi, his retainers Oboro and Hinata, and the rest of the people who the Nohrians captured. While Takumi is skeptical of Corrin's claims, Izana states that he had a prophecy and that he should "join their group". Izana then holds a small ceremony to get an answer from the gods, and gets the result "Go meet the dragon." Izana reveals that the ceremony he just used cost his life and jokingly threatens Takumi to join Corrin's group or he'd haunt him for the rest of his life. Takumi decides to join Corrin's group with his retainers to honor Izana's request, and the group then leaves Izumo.

From Izumo, an old province of Japan. 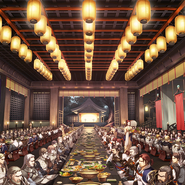