Walden James
[view]
“I have no heart. I know nothing of joy, sorrow, anger, dread... And yet, I am...afraid. That I should die, that I should leave Nino alone. That frightens me.”
—Jaffar to Legault in a support conversation.

Jaffar is a playable character from Fire Emblem: The Blazing Blade. Known as the Angel of Death, he is an emotionless killer in the employ of Nergal until he is changed by the kindness of Nino, the first person he ever came to care for.

Jaffar was discovered by Nergal as an orphan, sleeping among a pile of dead bodies. Nergal took in the boy, impressed by his evident skill, and began to train him. At some point later, Jaffar was sent by Nergal to infiltrate the Black Fang, an infamous league of assassins. His natural talents, combined with Nergal's training, allowed him to rise through the group's ranks quickly. He eventually replaced Jerme, The Death Kite, as one of the Four Fangs, the most powerful members of the organization.

In Fire Emblem: The Blazing Blade, Jaffar is first seen in a cutscene in The Dread Isle (Eliwood's Chapter 18, Hector's Chapter 19). Ephidel, upon learning that a member of the Black Fang, Leila, was actually a spy for Ostia, summoned Jaffar to kill her for betraying the group. Ephidel then commanded Jaffar to leave her corpse in the forest for Eliwood's army to find.

The turning point for Jaffar came when he met a young girl named Nino in Four-Fanged Offense. Nino was supposed to meet up with him after a mission, but then she found Jaffar hurt and bleeding badly, and had tended to his wounds when he passed out on the floor; for his part, Jaffar had seen Nino from afar sometimes, but they had never been face to face. When he came to his senses, Jaffar asked why Nino had spared him, remembering the Black Fang's code to kill the weak so that the strong may rise; she replied that, as a fellow Black Fang, she did not want him to die. This is the first time Jaffar felt emotions, and over time he began to care for Nino.

When Sonia had ordered Jaffar and Nino to assassinate Prince Zephiel secretly on behalf of his father, King Desmond of Bern, Sonia told Jaffar to stay behind for more details, telling him that after assassinating Prince Zephiel, he was to kill Nino so that the King would have a scapegoat upon which to blame the Prince's death. Jaffar openly wondered why Sonia would want to kill her own daughter, but ultimately told her it had nothing to do with him.

Though Jaffar and Nino infiltrate the Prince's manse, upon knocking out Prince Zephiel, he tells Nino it is time for her to do her part, but when she cannot bring herself to kill Prince Zephiel and closes her eyes preparing for Jaffar to kill her, he tells Nino to follow him, and that they are leaving. However, while they were attempting to flee the manse, Ursula spots them and Jaffar proceeds to fight her and her troops, telling Nino to run and that she deserves to live, refusing her offer to run with him and deciding to make a last stand to cover for her and protect Zephiel as well. If you recruit Nino, then she can talk to Jaffar and he joins the group at the end of the chapter, although some among the group (particularly Hector and Matthew) did not think he should be so quickly forgiven for all of the comrades he had killed (namely Leila).

When Jaffar accompanies Nino in her search for her mother Sonia and she confronts her mother and learns her origins, Jaffar defends her when Sonia sends Black Fang members after them both. Afterwards, he joins the group for the rest of the journey, so that he may atone for his sins.

Description: The Black Fang's Angel of Death. Once served Nergal.

Despite his status as a promoted Thief, Jaffar's starting stats are among the highest in the game. Given that he joins the group at Level 13 promoted and before obtaining a Fell Contract, the other potential Assassins, Matthew and Legault, take quite a bit of dedication just to catch up to Jaffar, let alone surpass him, so it may be wise to leave your Thief of choice un-promoted so they may continue to Steal. With a high sword rank and Strength, Jaffar can take down most common enemies and even some bosses, making him a valuable offensive asset. Silencer is mostly irrelevant, as Jaffar is likely to kill whatever he crits anyway, but it doesn't hurt when it does trigger. Jaffar is particularly useful on the Hard Mode version of Cog of Destiny, which has many strong and fast magic-using enemies, particularly Valkyries; he is one of the only characters who can double them at base, and his Resistance is high enough to survive a few shots from them. Jaffar's only significant weaknesses are his swordlock, meaning he has few options for 1-2 range, and his poor availability; aside from this, he is one of the best swordsmen in the game, and should be made use of.

Angel of Death
An emotionless member of the Black Fang assassins. Known as the Angel of Death. Appears in Fire Emblem: The Blazing Blade.

Though a deadly assassin, Jaffar is surprisingly lacking in Atk and has middling Spd. He is not fast enough to double a good portion of the meta, but he does have enough to prevent it from most units except the fastest out there. Jaffar does have enough bulk to stave off a few hits here and there, but is by no means a tank. As a Dagger unit, he is primarily used as a debuffer and can apply great chip damage, but with skill inheritance, he can potentially push himself in a better direction and bring him out of his mediocrity.

Deathly Dagger has the standard Def/Res -7 penalty after attacking an enemy however it also has a Poison Strike effect, dealing 7 damage to his enemy after a battle he initiates and survives. It has decent power behind it, but it needs its later Weapon Refinery effect to be relevant. Not only does it receive an additional 3 Mt, bringing his neutral Atk to 40, but it also completely disables enemy mages from counterattacking when he initiates combat, giving him a niche over mages who typically have low Def.

Glimmer boosts his damage when it activates by 50% which gives him decent additional power. Life and Death lowers his bulk while bringing his offense to a much better level to actually deal good damage and bringing his targets health low enough for most of his allies to finish off in his stead. Threaten Speed lowers the Spd of enemies within two spaces by 5, which does lower the spd of some threats to either allow him to double them or force them out of doubling him.

Jaffar does not have many pure counters save Raventome users like both Mage Robins, Sophia, and Lyon who can force a color disadvantage and push it with Triangle Adept to the point that he deals minimal damage to them. He is unlikely to kill them even though they have their counterattacks disabled. Physically bulky units usually can ignore his damage and can counter attack with Distant Counter such as Hector, Fallen Hardin, and Zelgius while Dragon units like Nowi, Myrrh, and Tiki can target his lower Res. Unless he can inflict the Speed penalty onto his enemy, most speed oriented units can completely smash through his low bulk.

Jaffar needs skills that boosts his offense or otherwise impact his opponents so he can deal more damage. His low attack is better suited to have Moonbow as the Def reduction will likely lead to more meaningful damage than Glimmer. Reposition is the usual unit positioning skill though as a ranged unit, Draw Back is another worthy option. Chill Defense lowers the Def of the enemy with the highest Def. It may be a little awkward to use or apply to the appropriate target, but nonetheless, it will give him the means to deal better damage against bulky units or allow his allies to do the same. Desperation gives him a guaranteed follow up and with a Life and Death boost, his Spd is at 38 at neutral, which is a mid-high Spd Tier. Attack Wave skills gives him not only a support skill, but also self-buff him to bring his neutral Atk to 51 on the turn it is active. He can run Spd Smoke for the higher speed debuff or whatever supportive Skill C is needed for his team.

Angel of Night
An unfeeling member of the Black Fang assassins. Attending the winter festival at Nino's side. Appears in Fire Emblem: The Blazing Blade.

Jaffar, Angel of Death
Jaffar vanished in the final moments of the last battle. He still avoids the bounty hunters who seek out the famed Angel of Death.

Nino and Jaffar
They were married after the conflict and were gifted with two twin boys. Their time in Pherae was happy until bounty hunters came for Jaffar. To protect his family, he disappeared. Nino vanished in search of him.

Jaffar is illustrated in the trading card game Fire Emblem Cipher with the following cards: 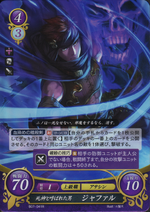 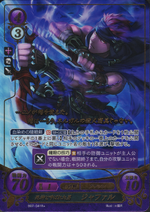 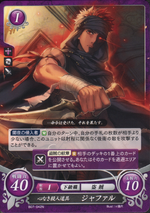 There is a city in modern-day Israel named Jaffa, or 'Yafo'. It was an ancient Phoenician city later ruled at various times by the Israelites, Arabs, and European Crusaders. Jaffa was predominately populated by Arabs until the creation of the state of Israel in 1948 and is currently a part of the modern-day city Tel-Aviv.