[view]
“Heh, these old bones are still good for something. Farewell, my prince. Live, and grow strong…”
—Jagen if he was made the decoy in Prologue IV of Shadow Dragon

Being a veteran knight of Altea, Jagen acts as Marth's guardian and advisor. He is often one of the people Marth turns to for guidance.

According to the Takayashiki Hideo's Mystery of the Emblem novel adaptation, Jagen is 58 years old.

In the Prologue of Shadow Dragon, Jagen meets with Marth's forces when escaping from Altea castle. He stays with him until Prologue V, where he can be chosen to be the decoy unit. If he is, his lines in Chapter 1 will be given to Draug instead. If he isn't, he goes into exile in Talys, together with the other altean knights. Later, he will help Marth drive Gazzak's bandits out of Talys and remains by his side until Marth defeats Medeus.

Like most other characters in the Archanea Series of Fire Emblem, Jagen's personality is not very well-developed, with much emphasis having been placed on his functionality as a combat unit on the battlefield. That aside, like most other knights appearing in the series, Jagen has been portrayed to be an individual who is fiercely patriotic to the country whom he has pledged his allegiance to (Altea), participating in many battles under its banner for decades. His devotion to his country is especially evident in the Prologue of Shadow Dragon, where he is one of few units who can be selected to act as the decoy to ensure that Marth and the rest of his retainers succeed in fleeing Altea. Should he be chosen, Jagen's parting words are ones that are gallantly courageous, where he, in spite of the dire state of his situation, ironically muses over the suitability of his age being a deciding factor in him being chosen as the sacrifice.

More dimensions to Jagen's character are introduced with the onset of New Mystery of the Emblem, where he frequently engages Kris in preambling discussions before the onset of each battle. Through these interactions, one can deduce Jagen to be both wise and prudent, as he constantly imparts sound advice to Kris to ensure that they form effective tactical decisions.

As his Archetype suggests, Jagen starts out with good stats, but has very low growth rates in most stats. His base stats are actually not as high as the likes of Marcus, but he will still be very strong in the early game, as he is durable, has very high hit rates, and can either use his iron sword to chip enemies, or his silver lance to deal a lot of damage, especially to bosses. Thanks to his high skill, he can also use javelins well. If Jagen gets a lucky level or two, he can hold up throughout the midgame. However, he will eventually be outclassed by Cain, Abel, and Hardin. Due to his high lance rank, he can still use a forged Ridersbane or Dragonpike and kill most cavaliers/manaketes with it. Jagen can be reclassed to a Dracoknight if the player desires another flier, as he can still put his lance rank to good use. He falls off later on as enemy stats get higher and your other units get stronger, though with a forged Ridersbane he can still contribute until Chapter 18. At higher difficulties, liberal use of Jagen becomes necessary to complete the earlier chapters. This results in other units getting less chances at level ups, allowing Jagen to stay ahead for longer, and altogether making him arguably one of the most important units in Hard 5: Merciless.

Veteran Knight
Veteran knight of Altea who protected Marth since he was young. Appears in Fire Emblem: Mystery of the Emblem.

True to his Archetype, Jagen is a powerful initial unit, but falls behind in the long run of the Heroes roster. Just about every single aspect of Jagen is easily accomplished by, if not better, by the host of other Lance Cavalry units introduced alongside and long after him. Mediocre Atk as well as low Spd and Def are among his many weaknesses. His only saving grace is his surprisingly high Res that could make him a somewhat viable Dragon dueling unit or a Close Counter mage unit. What quickly becomes clear is that Jagen is not going to exactly shake up the meta, even when receiving a new preference weapon and refine, but for those willing to invest in him, he can perhaps relive some of his glory days.

Jagen initially has a Silver Lance, which is merely a powerful, no effect lance. His new Veteran Lance grants him a bonus +5 Atk/Res if he either initiates combat or his opponent has over 70% of their full health. Jagen can finally deal a decent amount of damage, though he is more meant to either attack aggressively or serve as a primary wall to get both effects respectively. When refined, he gains a Sabotage Attack effect which plays perfectly onto his solid Res stat at 35 neutral and helps out against enemies who stick to tight formations. It does allow him to become a sabotage oriented unit who can run two of them, which can be listed below for his options.

Aegis shaves damage from ranged units, which further increases his bulk against Mages and a tad bit from Bows and Dagger units. Fury gives Jagen a nice boost to his four core stats enough to synergize with his refined weapon and help push some potential Ploy/Sabotage skills inherited. Finally Fortify Cavalry grants allies adjacent to himself a +6 Def/Res boost, fortifying their defensive stats for better dueling or tanking.

Jagen's low Spd and Def is dangerous as he is easily doubled and will take significant damage from many physical melee and ranged units. His low attack also leaves him unable to dent even some of the middling green units with mediocre bulk, who in turn will likely retaliate strongly through color advantage. Finally his Cavalry status will leave him vunerable to Horseslayer Mathilda and essentially all forms of Micaiah, even Festival Micaiah.

Regardless of set, Jagen should take Reposition for the ally positioning assistance. Iceberg is a quick charging special that allows him to weaponize his excellent Res into bonus damage.

Jagen can go full anti-mage, which is likely his best set, which means he requires Distant Counter to be able to bait them out and retaliate or he can take Warding Stance to boost his Res when attacked, though the latter does not allow him to counter attack. He can choose to take Berkut's Lance in order to solidify himself as an enemy phase baiting unit with a massive +7 Res when attacked plus an additional 3 Res when attacked. Quick Riposte resolves his low Spd though this can also be his Skill B. Guard slows enemy mage cooldowns as a result. Renewal can keep him healed. On his refined Veteran Lance, he can also take another Sabotage skill, namely Sabotage Defense to help himself out and his physical allies. If looking to leave him more supportively, Sabotage Speed will likely be a better option for his allies. Skill C can be a Resistance Wave skill for the self buff to his Res on certain turns or can run Ploy skills, either Defense Ploy or Speed Ploy for the same reasoning as his Sabotage inheritances above. One should choose one stat for the Sabotage set and choose the other stat ploy.

“Sire... Fight for Altea...”
—Jagen's death quote in Shadow Dragon
“Prove to me that you are worthy!”
—Jagen's battle quote in Tokyo Mirage Sessions ♯FE

Bones of Iron
After the war, Jagen laid down his lance and became one of Prince Marth’s closest advisors.

Jagen is illustrated in the trading card game Fire Emblem Cipher with the following cards: 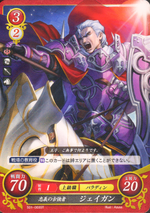 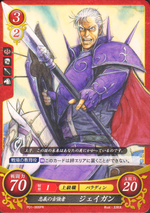 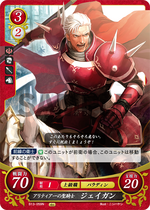 Jagen appears in Chapter 6 during the second trial to acquire the Opera of Light: Fire Emblem as one of three boss Mirages. He fights alongside Ogma and Palla.

Jagen appears as a collectible Spirit in Super Smash Bros. Ultimate, using his artwork from the original TCG.

"Jagen" means "to hunt" in German.