Ballistician (Shadow Dragon and the Blade of Light)

Pirate (The Blazing Blade)
Warrior (New Mystery of the Emblem)

[view]
“Hail yourself, sugar! What's a fetching lass like you doing out here on the battlefield? And how do you know my name?”
—Jake in Shadow Dragon

His looks varies much from game to game. Due to hardware limits in Genealogy of the Holy War, Jake uses a generic townsfolk portrait. In The Blazing Blade, he has brown hair and wears red. However, he looks dramatically different in Shadow Dragon, where he has blue purple hair and more refined clothes of the same color.

Jake appears in the very first game, Shadow Dragon and the Blade of Light as a playable Ballistician, he is recruited by having Caeda talk to him after someone has visited the house where Anna resides. In the remake, Mystery of the Emblem, he was omitted (along with numerous other characters).

He next appears in Genealogy of the Holy War, where he appears in front of Linda at the source of the Thracian River, originally intending to join Seliph's Liberation Army but got lost along the way and wounded, eventually deciding to return home to Anna. Linda, who Jake notes how her name sounds familiar, sets him on the right path and in return he gives her an amulet. He later gets lost again and runs into Amid, who reveals himself as Linda's brother. Amid sets Jake back on the right path and Jake in turn gives him another amulet. He thanks the two for their kindness, claiming that when he gets home, he and Anna will have children just like them.

Jake's next appearance was as a cameo in The Blazing Blade, where he was a member of Fargus's pirates. He appears to greet the ship's passengers if somebody visited Anna at the inn in the Port of Badon and tells you about the shops aboard the ship.

His ending in Shadow Dragon notes that he and Anna always dreamed of traveling to far off continents, perhaps referencing to their status as recurring characters.

Jake is a man who, despite being a unit in some games, seems to dislike fighting, as shown in Shadow Dragon, where he states that he "isn't cut out for the military". He also is smitten with Anna (and vice versa), and their relationship is shown frequently throughout the series. Although he does flirt with other girls, Anna does not seem to mind this very much, and she even recommends that Marth use this to his advantage. In Shadow Dragon and New Mystery of the Emblem, he also shares some sort of friendship with Beck, the other Ballistician. It is hinted in the conclusion of the War of Heroes when he asks Beck where he would be going now that the war is over, Beck responds on going back to wandering and one day they should meet up again in Anna's shop, hinting the two may have developed some sort of friendship since the War of Shadows.

Jake is the first ever Ballistician unit introduced in Fire Emblem, and one of only two available within the game (the other being Beck). Unfortunately for Jake, the class is not particularly useful in the NES version of the game.

While he is certainly usable, Jake comes saddled with problems. To start with, Jake starts with bad stats in everything other than Defense and he has pretty average growths to go with it, but they are all focused in secondary stats. On average, he will never gain enough Speed to break 0 adjusted speed, even at max level with the lowest Weight Ballista. He is also incapable of ever Promoting, leaving him with unimpressive stats even at max level. This will become a problem later in the game as enemies get stronger and begin to break his high starting Defense. Even if you attempt to fix this later in the game with stat boosting items, Jake cannot fix his Movement. Ballisticians have a crippling Movement of 4 and a Range of 2, meaning that unless you plan to waste turns waiting up for him or use very defensive strategies, it will be a pain just to get him to attack anything. This becomes particularly apparent if a map is Terrain heavy, which severely hampers his capability of getting anywhere. You could give Jake Boots to try and alleviate this, but other characters can make much better use of the item.

On the upside, Ballisticians can deal huge single hit damage to targets and can obtain weapons that can tear through enemy Ballisticians or flying units. If used defensively, they are very good at weakening enemy units into kill range. However, when taken in as a whole, Jake's lack of mobility, inability to promote, unimpressive stats, and mid-game Level 1 recruitment status mean that he is really not worth using.

Jake is the first Ballistician the player receives and provides a unique play style. Unlike other units, he has a low movement but can equip siege weapons giving him 3-10 range. This enables Jake to fulfill a unique role sniping out enemy units from afar, flying and magic units are good targets for Jake. Ballistas can be forged to further increase their power, accuracy and critical.

Jake has supports with Caeda, Lena, Minerva, Maria and Linde meaning Jake's accuracy and critical will noticeably improve if they are within 3 spaces of him. This can be used to help Jake hit more accurately. In chapter 13, Beck's Thunderbolt can easily be passed to Jake by another unit, to help defeat the boss, Grigas.

Compared to the other Ballistician, Beck, Jake has a lower skill base, but higher growths in Strength and Skill. Due to the way Ballisticians work it is easy to deploy Beck and Jake together. The two can stay within each other's movement range and trade weapons. Xane can be also deployed to create a third ballistician.

All in all, Jake is a unique unit with a unique purpose and should not be overlooked.

Jake has undergone some odd changes in New Mystery of the Emblem. All of his growth rates have increased quite a bit, but in turn, he is a pre-promoted Warrior with very poor base stats in most areas, barring Resistance, which may seem low, but all the other potential Warriors have a base Resistance of 0 and gain 1 point of Resistance upon promoting (Ymir already comes with this due to being a pre-promote), as well as having a 0% Resistance growth, compared to Jake's extra 2 points in the stat and a small 5% growth in the stat, although he should not be sent into a pack of Mages. It is also worth noting that Jake is probably the only Warrior in your army that can reach A-rank bows reliably (unless you abuse chapters like 10x, 22, 23 or the Endgame, or you use a lot of Arms Scrolls), as he comes in Chapter 11 with a C-rank in bows, at the point where your Warriors (if you have any) will probably only have E or D rank in bows, and his joining chapter, as well as the next chapter, are full of flying units.

Some good re-classing options for Jake are General, Berserker, Hero and Horseman. With General, he trades some speed for more Defense, and his extremely high Speed growth rate will bring his speed back up to par soon. Hero and Berserker will both give him higher speed and keep his access to axes. Horseman will basically be the same as Hero, but with bows, more movement and a higher Speed cap.

Despite these upsides, his terrible base stats hamper his usefulness and he joins in the mid-game, where your army may have surpassed him already, although, unlike the Wolfguard, his base level is low enough to the point where he can easily become viable due to his fantastic growth rates, he may become on par with your other units, and his C-rank Bows for a Warrior in the mid-game is nothing to scoff at.

"Jake helped rebuild a town destroyed during the war. He and his lover Anna always dreamed of traveling to far-off continents."

"Jake spent his days helping his girlfriend, Anna, manage her shop. The two dream of leaving for a faraway continent someday."

“I knew I wasn't cut out for the military. Well, too late now. I just hope Anna's OK...”
—Jake's pre-battle quote as an enemy in Shadow Dragon

Jake is illustrated in the trading card game with the following cards: 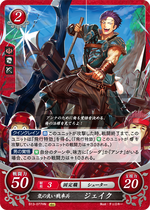 Jake is a short version of Jakob or Jacob, which is of Hebrew origin, meaning "holder of the heel" or "supplanter".   It's the name of the patriarch of the Israelites in the biblical book of Genesis.

Jake in The Complete.

Jake in the TCG.

Jake as a Ballistician in Fire Emblem 0 (Cipher).

Jake's portrait in Shadow Dragon and the Blade of Light.

The villager portrait used by Jake in Genealogy of the Holy War.