Archer (Genealogy of the Holy War)

Joe Zieja
[view]
“No. I won't stand for my brothers' vile ways but I just won't betray my father, either. I'm going back to the capital. I'm going to try, one more time, to convince my father.”
—Jamke, in a conversation with Edain

Jamke is a playable character from Fire Emblem: Genealogy of the Holy War. He is the youngest prince of Verdane, the son/grandson of King Batu and the brother/nephew of Prince Cimbaeth and Prince Munnir.

He is the Verdane royal who is seen to actively resist the changes Sandima and the Loptr Church are attempting to bring about in the country.

Jamke goes behind his brother's back and rescues and frees Edain and Dew after Munnir captures the former. While Cimbaeth and Munnir eagerly attack Grannvale, He repeatedly attempts to talk Batu out of invading, to no avail. He's forced to fight against Sigurd's army despite wanting to end the bloodshed but can later be convinced to join Sigurd's army if Edain speaks to him.

Jamke will eventually perish in the Battle of Belhalla, alongside many of his fellow comrades. If he is paired with someone, his children will eventually inherit Verdane, if they survive the war, as Jamke became the sole heir of the kingdom since the other members of his family fell on battle against Sigurd's army.

Jamke believes the war to be unnecessary and immoral. Unlike his older brothers, Jamke is worried about Sandima's influence and deeply distrusts him. Though he is a competent warrior, he dislikes senseless violence.

Jamke is willing to lay aside his "honor" in order to do what he feels is right. When he is unable to convince his family to desist from attacking Grannvale, Jamke undermines their immoral actions first by subterfuge and then by openly taking arms against them. He cares deeply about his father and the future of his country, and decides that he'd rather be accused of treason than let Sandima and his brothers continue an unprovoked war against a neighbor they had been at peace with.

Jamke is a powerful ranged unit obtained near the end of Chapter 1 in Sigurd's tale. Jamke is one of the most offensively impressive units in the first generation, sporting the Pursuit, Adept, and Charge skills and good strength, skill and speed on top of wielding a Killer Bow. Pretty much everything Jamke attacks, he kills. He can make short work of almost any Boss or unit in the game, and will have a very easy time clearing the Arena on each map.

He does, however, come with some flaws. Jamke, as an Archer/Sniper, cannot counterattack enemies that attack him from melee range. Meaning he will need to wait behind other units and wait for opportune times to move in and strike. Compounding this issue is the fact that Jamke has low Movement like all infantry, which will not be fixed by his Promotion, Jamke might have trouble reaching the action sometimes, let alone strategically positioning him so that he is not overrun by melee units. His durability is not particularly outstanding, though his high HP will help him eat a hit or two.

Despite all of that, Jamke is a good unit and excellent at killing troublesome unit leaders and Bosses even if he may have some movement issues.

Jamke has pretty good growths and skills for a father, but he has a few fairly notable problems. The first problem being that his Pursuit skill is a class skill and not a personal skill, meaning he cannot pass it on to his children. Secondly, he cannot pass any weapons on to any children except for one pairing. Lastly, his Skill growth is abysmal.

Luckily for Jamke, Skill in Genealogy of the Holy War has a rather limited effect of increasing Accuracy by 2 points per 1 point of Skill as well as increasing the chance to activate Astra, Luna, Sol, and Critical (including Critical bestowed by weapons) by 1% per point. While obviously having high Skill growth is preferable, having low Skill growth is not as crippling as having low growth in other stats since Accuracy is much more dependent on the weapon equipped than the Skill of the unit. It is also not difficult to pass a Skill Ring on to Jamke's children since there are two of them in the game and the item is not very heavily contested anyway.

Jamke is best paired with Edain. Ayra and Brigid are solid choices, but with some flaws. Generally his other pairings are not very good because the children will lack Pursuit, Jamke cannot pass on any weapons, or the children are focused on Magic. Passing on Adept generally is not worth such a mismatch.

In Chapter 1, Edain can recruit Jamke by speaking to him.

In Chapter 4, if Edain and Jamke are lovers, she may speak to him, resulting in him receiving a Brave Bow.

In Chapter 5, after Lubeck Castle is captured, Dew may speak to Jamke, but nothing will result of it.

In Chapter 5, after Phinora Castle is captured, if Jamke is in love with Brigid, she may speak to him, but nothing will result of it.

Prince of Verdane
The prince of Verdane. He does not carry the blood of a crusader in his veins. He turns his bow against his homeland to try to stop the war. Appears in Fire Emblem: Genealogy of the Holy War.

Jamke comes to Heroes as a Grand Hero Battle unit. While he initially seems similar to Leon, his higher offensive stats set him apart; he actually has the highest base Attack stat of all colorless units in the game (tied with Sothe). His Defense is also serviceable, with Resistance being his only real weak point in terms of stats. To further augment his dueling potential as an archer, he can even refine his base Slaying Bow to boost his HP along with any other stat he chooses, although he will most likely look to boost his Speed.

Jamke has the tools to use his strong stats as well. Thanks to his very high Attack, decent Speed and Slaying Bow, combined with Astra for a Special, he ends up putting out some very nasty burst damage. If he has both a Speed and Attack advantage over the foe (the former of which can be easily achieved with a Sacred Seal), he can activate Astra every combat he enters against ranged units thanks to Heavy Blade. He also comes with Cancel Affinity, a skill which turns the common Raven-Triangle Adept combo on itself.

Jamke does have his weaknesses though. Although his Defense is definitely usable and valuable, the same can not be said for his Resistance. With a paltry base 55 magical bulk, most boosted mages will take him out in one hit, and even some unboosted mages, although refining Jamke's Slaying Bow to give him more HP definitely helps his matchups along. Dragons can also be very dangerous if they find their way into melee range. Jamke's job is to use his high Attack to punish units without high Defense, and for a free unit, he does his job very well.

Jamke is very easily beaten by most mages with respectable power, especially Blade tome users. He will struggle mightily against anyone who deals magic damage to him, especially those whom he can not retaliate against, such as staves, dragons, or the increasingly common Windsweep users. However, he doesn't go down so easily to physical damage dealers without their Specials ready, especially when his refined bow pushes his physical bulk to at least 72.

By a bow user's standard, Jamke does a ton of damage, and most of his inheritances should be focused around boosting this damage as far as one can. Keeping Slaying Bow is recommended as Jamke can refine it to boost his stats while reaching his Special more quickly. An ideal possible set is to use Draconic Aura combined with Life and Death, two skills available on four-star units, and then a Heavy Blade seal. With these skills, an external Speed buff from an ally, and a Speed refinement for his Bow, Jamke becomes a Player Phase monster that inflicts severe pain on anything he attacks. An offensive B skill such as Chill Speed or Desperation can give him far more avenues by which to decimate his targets. With his huge Attack, Jamke also becomes a dangerous user of a Firesweep Bow+ set.

If desired, Jamke is also just physically tanky enough to consider a Close Counter set; although Leon is slightly better at tanking physical hits thanks to his marginally higher Defense, Jamke offsets this by having higher Attack and Speed, making him more dangerous on the counterattack. He can choose to run Guard (inheritable from Leon) to deny enemy Specials before firing off his own, or even Vantage to pack a surprise wallop if his Special is still ready on enemy phase.

Jamke's stats make him able to run just about any set you want on him, but he's best off using his high offensive spread to blast through enemies.

In the Mitsuki Oosawa manga adaptation Jamke is shown to have a good understanding of strategy, as exemplified where he is seen discussing tactics with Sigurd and Quan from time to time. In this version, he is recruited by Edain and marries her, being the future father of Lana and Lester.

Jamke is illustrated in the trading card game Fire Emblem Cipher with the following cards: 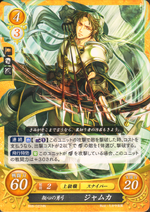 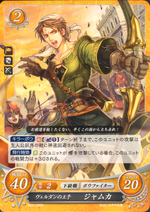 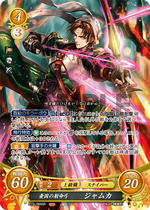 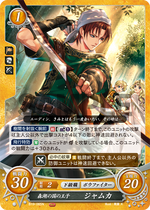 Jamke is a corruption of Jamukha, a Mongolian political and military leader who was a rival to Genghis Khan. Jamke's father, Batu, also derives his name from Mongolian history.