Hawk
[view]
“My homeland of Phoenicis is bordered by the South Sea. It's a wonderful place to live. There aren't that many of us, and everyone gets along... I've seen many countries with my own eyes, but Phoenicis is the best!”
—Janaff talking to Lucia in a support conversation

Janaff is a playable character from Fire Emblem: Path of Radiance and Fire Emblem: Radiant Dawn. Due to possessing an impeccable sense of sight, he thus serves as the 'eyes' of the Hawk King Tibarn. Janaff is also a good friend of Ulki's.

Janaff's appearance belies his actual age of 110 years, causing him to often be mistaken for a child.

Janaff is introduced to be one of Tibarn's right-hand men in this game, where he is often sent out on errands to conduct surveillance on vast areas of land on his master's behalf.

When Reyson later joins the player's army in Chapter 18, Janaff, alongside Ulki, is instructed to serve as his bodyguard. When Naesala appears as an enemy unit in the next preceding chapter, Janaff is capable of convincing him to leave the battlefield, where he reveals that Ike's forces have managed to rescue Reyson and Leanne from Duke Tanas' grasp.

Janaff will then remain with Ike's forces until the game concludes.

Janaff makes a re-appearance in this game, resuming his position as the 'eyes' of Tibarn and an advisor to Reyson. He plays a very minor role in the game, and only speaks a few lines.

Janaff will stay with the Laguz Alliance for the rest of the game, and may be brought into the Tower of Guidance to face off against Ashera.

Despite being older than Ulki by at least five years, Janaff sports an enthusiastic and friendly personality, a trait that while particularly accentuated when he interacts with other Bird Laguz, allows him to talk to beorc in a carefree manner. Contributing to this is the fact that he has a rather small stature compared to his larger countrymen, however, and so appears quite young, making him pretty sensitive to this. As a result, Ulki treated Janaff like an old man at any opportunity he got, much to his dismay.

Despite his bubbly personality, however, Janaff is easily offended, as can be observed by a support conversation he shares with Oscar, where he responds to the latter's politeness with hostility.

Though Tibarn is his king, they do not share the typical lord-servant relationship, and in fact are more like close friends. Thus, when they, alongside Ulki, are together, their banter becomes far more informal.

Janaff is initially prejudiced towards the Beorc, loathing them for the discrimination they have exhibited towards the laguz race. He later changes this perception of his after remaining in Ike's army for a prolonged period of time in Path of Radiance. This may be observed in a support conversation he shares with Lucia, where he reveals that his hatred for Beorc has subsided after meeting her.

Janaff (along with Ulki and Reyson) is the first bird Laguz the player recieves. As with all other Laguz, he is only able to engage in combat part of the time, which severely limits his usability. However, unlike Ulki, Janaff will start all maps transformed. This allows him to contribute early on, and his flight and high movement give him a niche that most units don't have. Despite this, his base stats are not particularly high for his join time, so it may be hard to justify deploying him over your other units.

It's worth noting that by the time Janaff and Ulki join, the player will have access to the demi band. While equipping it would somewhat hinder their bases, making them downright below average early on, they both have high growths to compensate. Due to their innate flight, they would make good use of investment, as a player could always find uses for a flier with decent combat (though keep in mind that both will lack canto).

Contrary to his appearance in Path of Radiance, Janaff starts off with amazing base stats good enough to carry him through the entire game despite his "low growth rates", with his most important being his 34 speed and 32 strength when transformed, letting him double pretty much everything, and one round most enemies in part 3 and 4 . The only two things that hinder him are his laguz gauge and his lack of 1-2 range, the latter making him less useful on enemy phase when compared to other combat units like post Ragnell Ike, Titania, Haar, Jill, and the former limiting how many enemies he can kill per turn. Still, there is always something for him to do, like rescuing, flying across terrain to take care of a small battalion of enemies, or darting into a thick group of enemies and killing a specific enemy like a thunder mage or archer then cantoing out, to make sure your units do not face huge counter damage. He may not be the best choice for endgame, as there are many units which are simply better at combat and do not have a laguz gauge, but he is a great filler unit, especially in part 4 when you are dispersing all of your good units between 3 different armies.

when looking at Janaff's stats, he is often compared to Ulki, who has better speed, resistance, and avoid, compared to Janaff having better strength, defense, luck and skill. Though in practice both of them perform quite similarly Janaff is clearly better as his 2 strength untransformed over Ulki translates to 4 strength over Ulki transformed, which turns into 8 more damage when double attacking (which they both pretty much always do). They both have personal skills, Janaff's Insight being relativly useless , giving him +20 hit and +5 tiles of vision in fog of war, but when compared to his base 38 skill is pretty much overkill, and the fog of war vision being situational at best. Ulki's Vigilance is more usefull giving him +20 avoid and crit avoid, but the only time Ulki would really need it is on the front lines, where he shouldn't be in the first place. due to his laguz gauge getting drained from multiple 2 range enemies without being able to retaliate. Still, there should always be a place in your army for Janaff and Ulki, as their versatility and combat are something only a few units have at the time.

“Ouww... I've been beaten. Sorry, but I've got to return to Phoenicis. I don't want to slow anyone down.”
—Janaff's retreat quote in Path of Radiance if Ulki and Reyson are still able to participate in battles
“Ugh... How stupid... I thought I'd have...seen it coming...”
—Janaff's death quote in Radiant Dawn.

Reyson: Janaff? What are you doing here?
Janaff: H-hello! Nice to see you, Prince! What a coincidence, huh?! I'm just, um, taking a flight. At night. In a battlefield.
Reyson: ...Oh? I assumed Tibarn might have sent you to protect me.
Janaff: Oh, no, no! Nothing like that!
Reyson: Janaff. Do you really think you can hide anything from me?
Janaff: It... It was Ike! Ike asked me to help out the Greil mercenaries! Really!
Reyson: Mm-hm.
Janaff: You see, Your Highness, the enemy might get suspicious if there were no birds among the force!
Reyson: Ah, that's a good point. Now I understand. My apologies for jumping to conclusions.
Janaff: No worries, Your Highness... Ha ha...ha...
Reyson: Then let us go together to Ike and seek his next command!
Janaff: What?! Whoa, hold up there!
Reyson: What's the problem? I thought you were here to help.
Janaff: Oh, hey, no problem at all, Your Highness. No problem whatsoever!
Reyson: Excellent. Let's go.
Janaff: Perfect... Tibarn's gonna have my beak for this...

"If you ever have need of the king's eyes, fire a flaming arrow from a high place. I'll see it and come flying! Um, that is, if I'm not busy on an errand for the king."

As the new king's right arm, Janaff so eagerly trained his men that he often skipped meals, weekends, and sleep.

Janaff is illustrated in the trading card game Fire Emblem Cipher with the following cards: 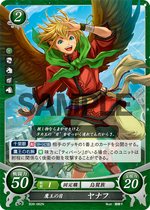 Yanaf (also Yanuf) is a Himyarite (an extinct language once spoken in Yemen) name meaning "exalted", and was used in the names of several kings of Himyar.