Commander of the Begnion Occupational Army

Jarod is a boss character from Fire Emblem: Radiant Dawn. As the main antagonist of Part One, Jarod was the commander of the Begnion Occupational Army in Daein. He formerly served in the personal army of the Duke Numida as the Duke's personal general.

Once Empress Sanaki heard about the situation in Daein, Numida betrayed Jarod, pinning all the blame on him. After hearing this, he decided to make a "last stand" and tried to kill Daein's only hope - Micaiah. However, before he strikes, the Black Knight warps in front of Micaiah, protecting her. After being, apparently struck down, it is revealed that Alder, a firm believer in Jarod, took the blow for him, which killed him. Alder stated before he passed on that although Jarod participated in inhumane acts and did unbearably cruel things, he (Alder) always sensed that Jarod wasn't all evil and that there was a kindred spirit buried beneath him (Jarod). The Black Knight then refuses to strike at Jarod again, stating that his "sword is not made for killing those who will not raise their weapons".

Jarod is killed in Nevassa, in Daein Keep when the Daein Liberation Army takes control over Nevassa back after Jarod remorselessly destroys Nevassa as one last act of defiance. He is well known for the motivating speech given to the soldiers defending Daein Keep.

Micaiah: General Jarod! Your occupation army has caused untold suffering to the people of Daein... The time has come! You must atone for your deeds!
Jarod: As if I should care one whit about the wretched worms I trample!

Jarod: I see you're pretty impressed with yourself!
Black Knight: Did you think the likes of you could be a worthy opponent for me? Know your place.

Jarod: So, you have the audacity to approach me at last. Don't expect an easy fight. Before I die, I will see each of you dead before me.

Jarod: So it's you... little girl.
Micaiah: General Jarod, the battle is over. Surely you can see it. You never believed Daein could do it, did you? But here you stand, broken, defeated by my countrymen and friends.
Jarod: Have I really, I wonder? Didn't I tell you? With you dead, there is no "Liberation Army". This is my golden opportunity. One blow is all it takes to turn defeat to victory. Such a lovely thought.
Micaiah: I will not lose to you. More importantly, the people of Daein will not lose to you!

Jarod: That face... I remember you. The kid who's always with that little wench.
Sothe: Sothe, of the Dawn Brigade.
Jarod: The Dawn Brigade, hm? Oh, how I despise your ilk. The thought of draining the life from your body... It makes me tingle all over.
Sothe: Ditto.

Jarod: Well well well. Look what we have here. The loathsome phantom of old Daein... Why in blazes are you here? What inspired you to slooooowly clank your way up out of your grave?
Black Knight: My purpose is not for you to know.
Jarod: Oh. I feel so rejected. Must I crack that helm open and ask your ugly, naked face directly!? I have to take vengeance for Alder's death, after all!
Black Knight: This is how you meet your death? Sad. Come at me then, and join your friend.

Jarod: So, sub-human, the slave turns on the master? I'll teach you to know your betters!

Jarod: You're one, aren't you? One of those odd sub-humans that witch brought... You'll make a nice rug!

Jarod: A heron? One of you survived? How sad. On the plus side, if I take you back home, the money will set me up for life! 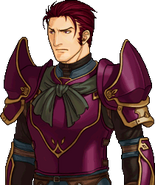