Troubadour
[view]
“That's okay. I'm just happy to have a brother! Tristan, we must make certain we never get separated again!”
—Jeanne

Jeanne is a playable character from Fire Emblem: Genealogy of the Holy War. She is the younger sister of Tristan and the daughter of Eve, a knight of Nordion. She is the substitute character of Nanna and thus will fill her role in the story if Lachesis was not paired up.

She has a special conversation with a fake Shannan (possibly Shannam) if she visits a certain northwestern village in Chapter 9. She will gain three points of Defense from this. It is important to note that this scene can be triggered by Hermina instead.

After her father's death, Jeanne and Tristan were taken in by Sigurd's army. After the events of Chapter 5, they fled to Isaach with Shannan, Oifey, and Seliph. However, she was eventually separated from the others and found by a traveling merchant, who took her in as his daughter. When she was seven years old, the merchant was murdered by a soldier of the Grannvale Empire and she was thereafter adopted by Finn, who raised her in hiding alongside Leif. In Chapter 7, she fights alongside Leif and Finn to defend Leonster from Bloom's army.

Jeanne has a very similar personality to Nanna, being a kind and hardworking girl and dedicated to her goals. Jeanne has a strong aversion to giving up or conceding, refusing to let the deaths of Leif's men be in vain and encouraging him to keep fighting.

When she reunites with Tristan, she does not recognise him, and while she initially thinks that he is joking, she begins to believe his claim that he is her brother after he explains his backstory. She also harbours a desire to help others, as seen in her lover conversation with Leif in the Final Chapter, in which she persuades him to let her heal the army despite his refusal to allow her to fight.

Jeanne, like many other substitute characters, doesn't measure up to the unit she substitutes for, Nanna. While Nanna will be dependent upon her father for skills, her mother Lachesis at least guarantees her the Charm skill. Jeanne, on the other hand, has no skills, generally inferior growths, and mediocre base stats. Nanna's fighting prowess will be far superior to Jeanne's generally, as it's rather common for her father to have Pursuit and respectable Strength growth. While Jeanne's Magic stat is superior to Nanna's, it's still rather low due to her poor growth. Still, Jeanne will generally wind up as a superior healer to Nanna. Jeanne also beats Nanna in Skill in almost all pairings, though this has little impact. Nanna's significantly higher combat potential and inheritable weaponry generally puts her above Jeanne by a fair margin.

When strictly compared to other substitute characters, Jeanne is unremarkable statistically but important because she is a high mobility healer. Particularly since she is your only high mobility healer until other units can Promote. She, like other Troubadours, will be adept at wielding Magic Swords compared to other units, but will have trouble doing a lot of damage due to a lack of Pursuit or Adept.

Jeanne is not a poor unit, but her lack of skills, lackluster offense, and poor overall growths essentially pigeonhole her into a permanent healer role where she's helpful but not particularly powerful.

In Chapter 7, if Tristan talks to Jeanne, Jeanne will gain one point of luck.

In Chapter 9, if Jeanne visits a village in the northwest, Jeanne will have a conversation with a fake Shannan (Shannam?) and she will gain three points of defense.

In Chapter 10, if neither Jeanne nor Leif have a lover, Jeanne can talk to Leif, and Jeanne will gain three points of HP and 100 love points with Leif.

In the Final Chapter, if Jeanne and Leif are in love, Jeanne can talk to Leif after Edda is captured and Leif will gain three points of HP.

In the Final Chapter, if Jeanne and Seliph are in love, Jeanne can talk to Seliph and Seliph will gain three points of HP.

“Prince Leif, I’ll leave the rest to you…”
—Jeanne's death quote in Genealogy of the Holy War

Jeanne is illustrated in the trading card game with the following cards: 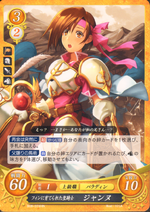 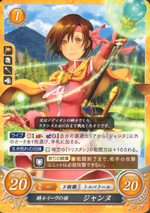 Jeanne is a French female name, equivalent to the English Joan, Jane, Jean and Joanna. It is most strongly associated with Jeanne d'Arc.