Richard Epcar
[view]
“Aaah hah hah ha ha ha! Alm and Anthiese… You stand at the pinnacle of your respective kingdoms. The hour is come for the world of man to return to the gods’ control! It is the dawn of an age of fear and chaos, cradled in Duma’s shadow!”
—Jedah

Jedah is a major antagonist in Fire Emblem Gaiden and its remake, Fire Emblem Echoes: Shadows of Valentia. According to unused internal data within the latter, Jedah is 147 years old.

Jedah is a priest of the Duma Faithful who came in dispute with the High Priest Halcyon and banished him, gaining control over the church. He is the father of Marla, Hestia and Sonya, but abandoned them at some point. Years later, he eventually reunited with his two eldest daughters and sacrificed them to Duma, turning them into witches. He becomes an advisor to Emperor Rudolf. Under Jedah's suggestion, Rudolf one day stormed the Temple of Mila with the intent of sealing Mila with Falchion. Taking her skull with Falchion still embedded in it, Jedah places it in the deepest catacombs of the Duma Tower. With the Earth Mother sealed, the lands of Zofia begin to decline, beginning Jedah's long laid plans to have Duma's influence spread throughout all of Valentia.

As Celica leaves the island of Novis to seek Mila, Jedah, concerned about Duma's well-being, privately reassures him that he will deliver Celica to him without fail. When Celica and her army pass through the Dead Man's Mire on the way to Duma Tower, Jedah contacts her in secret. Jedah explains that Mila and Duma will eventually go insane and destroy Valentia, and he offers to return Mila to Zofia if Celica sacrifices her soul to Duma. If she does so, Duma will be cured of his madness and Mila will be returned to Zofia, saving both kingdoms and preventing Alm from fighting further. Celica notes that she has no reason to believe him, but Jedah says he will await her response atop Duma Tower. Jedah meets Celica again at the Swamps of Duma, whom explains that she will not make a decision until she meets with Mila. Jedah attempts to kill the rest of her army because Celica's life is the only one he needs, though he ultimately returns to Duma Tower. Jedah can also at this time reunite with Sonya, who vows revenge on him for what he did to her sisters.

Once Celica reaches Jedah on Duma Tower, he reveals that Mila sealed herself and the Valentian Falchion away. With nothing left to stop Duma, Jedah once again requests that Celica sacrifice her soul. Despite Celica's comrades trying to convince her to not do so, Jedah warps Celica's army to below Duma Tower and allows Celica to watch Alm suffer while he prepares for the sacrifice.

After Alm kills Rudolf, Jedah tells Celica that Alm is going to slay Duma next, which would be a suicide errand without the Falchion. Celica, not wanting Alm to continue suffering, agrees to voluntarily offer her soul to Duma in exchange for Alm's safety. Satisfied, Jedah leads Celica to the underground catacombs of Duma Tower to prepare to sacrifice her.

Once Alm reaches Duma Tower, Jedah thanks him for disposing of Rudolf and allows him to converse with Celica one last time. Shortly after that, Celica asks Jedah to release Mila from her seal once the preparations for Celica's sacrifice are complete, but Jedah reveals that doing so is beyond his power and abilities, and reminds Celica that Mila sealed Falchion herself and that normal people have no say in the matter. Celica is furious that Jedah lied to her, but he merely tells her to blame Mila for abandoning the Zofians. Jedah then destroy's Mila's body, leaving only her head remaining the Falchion still impaled on it. After that, despite Celica's struggles, Jedah then summons Duma's eyeball to have Duma devour her soul. With Celica now reborn as a mindless and soulless witch, Jedah sends her, Mila's remaining head, and Falchion to the depths into the Royal Vault.

When later Alm encounters Celica and Falchion, Jedah chooses to watch them fight to he death for his amusement. To Jedah's shock and horror, however, Alm is instructed by Mila's spirit to unseal Falchion, forcing Jedah to retreat. Alm then uses the Falchion to kill Celica, but Mila then revives her and removes Duma's control on Celica. When Alm's army (along with the recently revived Celica) arrives to save Celica's army, Jedah stands against them to protect Duma, as he believes that Valentia cannot sustain itself without the gods. Jedah fights the two armies alongside his two older daughters, Marla and Hestia, and his lord Duma, but is slain with his last thoughts being concern for Duma.

Jedah is the leader of the Duma Faithful and displays blind faith in Duma's doctrine, finding little value in kindness and compassion. He pushes Duma's will onto Valentia, believing that it would be in the best interest for the continent as a whole. He fanatically seeks power, even expelling other high members of the Duma Faithful, such as Halcyon, simply to keep power in his grasp and with little remorse.

He is not above instigating war, seeing it as the very thing Duma seems to treasures most. He is not above lying to his enemies as Jedah possesses a manipulative streak, using his enemies emotional weaknesses to his advantage, namely Celica's bond with Alm. He can make promises only to immediately betray them once he has obtained full control of his situation. He can be sadistic, believing that pain is only a means to make others stronger and his followers should strive to endure suffering. In the original Gaiden story, he intended to kill Celica slowly. He emotionally tortures her and laughs in her despair when Celica has come to realize that her efforts to both find Mila and protect Alm were in vain in wake of her self-sacrifice. To ensure his master's vision, he is willing to sacrifice anyone and everyone, even his own daughters (save Sonya) to give Duma more minions and fulfill his ambitions.

Despite his questionable actions, he genuinely believes that Duma's teachings -- and only his teachings -- would benefit Valentia as a whole, making them stronger through the harsh teachings of Duma, at the expense of not knowing compassion and kindness. He also has something of an unwillingness to accept change, as he believes Valentia could not survive without either Divine Dragon, especially Duma, so he stubbornly refused to believe Alm and Celica, who claimed that the nation can survive without the assistance of gods.

Jedah can be fought as a boss twice: once during Chapter 4 (Celica's route) and again during Chapter 5. He is a fairly difficult boss and in addition to his high stats and equipment, he has the ability to negate any attack that is not from at least 5 spaces away. He can also summon Mogalls. One way to beat him is to have him use his magic until he runs out of enough HP to keep casting, and then attack him with a long-ranged bow. But the best way would be to bide your time, as his "seal" wears off every 4 turns leaving him vulnerable to attacks. In Chapter 4, using the Triangle Attack should be more than enough to defeat him. But in Chapter 5, you can try having Celica next to Alm (as this will make all of Alm's attacks a critical) and finish him off quite easily. Defeating him in the last chapter also eliminates any of his Mogalls, making the game that much easier to complete.

In Chapter 4, Jedah has very high defenses and quickly summons Mogalls, without spending any HP, that move toward your units to block you from engaging him in battle, before he approaches you starting at turn 4. Furthermore, he gains 10 HP at the start of his turns. Unlike Gaiden, he negates the first 3 skirmishes you initiate against him, but engages you in a fourth one. Units with large range, such as Leon are invaluable for buffering out an opportunity to strike. One safe way to kill him requires promoting Atlas into an archer, then Sniper. At turn 1, have Leon attack Jedah (at a range of 4 to 5), then Atlas. At turn 2, have Leon attack again, and another heavy hitter to deal damage eg. Atlas again while using a Killer Bow's Hunter Volley skill, and repeat until he has been defeated.

“You fools who know not Lord Duma's power... You will regret this...”
—Jedah's defeat quote in Chapter 4

“All glory...unto Duma...”
—Jedah's defeat voice clip
“Keh heh heh... Your struggling is most precious. But I'll not end your meager little lives quite yet. Anthiese! You will ascend Duma Tower and join me at its pinnacle! ...Unless you wish to lose your precious Alm, that is.”
—Jedah's retreat quote in Chapter 4
“Aah... This cannot be... It mustn't... Lord Duma... My Lord... Duma... ”
—Jedah's death quote in Chapter 5

Jedah is illustrated in the trading card game Fire Emblem Cipher with the following cards: 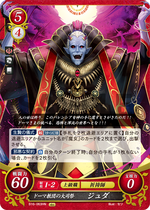 Judah, in the Christian and Jewish religion, was the fourth of Jacob's twelve sons. It seems to be a variant of the name Judas.