Mage
[view]
“Such shame would dishonor my brother's good name, so... I'D RATHER JUST JUMP OFF FROM HERE AND DIE! Farewell~”
—Jemmie after being cornerd by Lance and Alen

Jemmie is a skilled mage of Bern and younger sister of the Wyvern Rider Zeed. She originates from the Fire Emblem: Hasha no Tsurugi manga.

Prior to the events of the manga, Jemmie lived with her older brother Zeed in the nation of Bern. Poor and homeless orphans, they struggled to survive everyday. At some point in time, the siblings were picked up by Bern's army, and it was here where they were taught how to fight, and where Jemmie started practicing magic for the sake of killing. It was also around this time that Zeed was able to buy Jemmie her circlet, which she cherished.

Years later, Jemmie would take part in the Bern's campaign to conquer Elibe, being stationed at the Western Isles. Here she is introduced to Arcard, a corrupt noble overseeing Etruria's mining operations, and displays her playful demeanor by styling his hair, as well as her ruthlessness when she nonchalantly kills some of his men who upset her.

Using the spell Bolting, she destroys a battering ram which the Lycian League army, led by Roy, was using to break into Arcard's castle, completely halting their advance. However, thanks to an impressive show of strength by Gant, a knight of Tania, the League is able to reach the inside where Jemmie was lying in wait with a powerful fire spell she dubs "Elfire 10x Special". Al, the manga's protagonist, arrives just in time to cut her spell in half, simultaneously slicing her circlet in half as well, this causing her to go into a rage and retreat into the castle.

She soon returns with the dragon Ain, having him attack the Lycian League. Ain and the league then take part in a heated battle, with the swordsman Kilmar ineffectively taking the initiative upon recognizing the dragon as the very same who destroyed his village and killed his love, Aileen. Worrying about the damage being done to his castle, Arcard demands an explanation on Jemmie's intentions, to which Jemmie reveals that Bern merely sought to test the capabilities of their dragons in real combat and threateningly dismisses him. To her astonishment however, Ain is defeated by Kilmar and she is nearly captured by Lance and Alen. Rather die than be captured and allow her defeat to tarnish her brothers reputation, she opts to jump to her death, but is saved by Zeed who arrives on his wyvern. Tearfully apologizing for her failure, Jemmie and Zeed flee, with Zeed offering her reassurance, but still surprised at Ain's defeat.

She is not physically seen again until just before the battle of Aquleia, where she is informed by the Wyvern General Narcian that Zeed perished in the Nabata Desert. Panicked from his mounting failures, Narcian repeatedly hits Jemmie and tells her that she will make up for her brothers failure, which she affirms. She leaves to prepare for battle, along the way she coldly kills both Arcard and the Etrurian High Chancellor Roartz for disrespecting her. During the battle she is spotted by Kilmar, being carried by a Wyvern Rider while repeatably attacking with magic. He followers her to the bridge leading to the Etrurian Royal Palace called the "Holy Royal Road" where she recounts it's legend and launches a powerful magic attack along with seven other mages on the Lycian League and Etrurian armies below. Preparing to launch another attack, she notices Kilmar who arrives just and proceeds to dispatch of all seven of the mages with her. The two dual, but Jemmie cannot match Kilmar's skill and is easily defeated, though he offers to spare her life after hearing to she lost someone precious to her. While she at first seems ready to surrender, she makes one last suicidal attack hoping to take Kilmar with her but is unable to do so as the swordsman easily dodges her. She falls from the bridge they were standing on and her magic detonates, killing her.

She is seen again one last time as Zeed is dying after being defeated by Gant in dual during the battle just outside of Bern Castle. There she informs Zeed that she was looking for him, wanting to tell him that they no longer need to fight and stating that so long as they are together, nothing else matters.

Jemmie holds a deep admiration for her brother, this stemming from their lives as children in Bern where Zeed would be the one to provide for her. Not knowing of her parents or even remembering their faces, Zeed is the one person whom Jemmie cares for most in the world. This love is so great that flies into a rage when Al destroys the circlet that Zeed gifted her and is shown when she is willing to take her own life rather than be captured and besmirch her brothers name. Naturally then she considers life without her brother not worth living, as she does not hesitate when she tries to commit suicide and take Kilmar with her.

She is most commonly seen with a happy and playful demeanor, such as when she casually arrives in Arcard's castle and styles his hair. This front however belies her cruel, cold and sadistic nature. She sees little value in the lives of anyone other than Zeed and will not hesitate to kill others in his name or even at her own discretion. She even takes some amount of joy in the misery of others such as when she gleefully demands Ain leave none of the Lycian League alive as he did with Kilmar's village. This all however is likely a product of her upbringing with Bern, as she was taught to kill for them. That said, after Zeed's death she becomes noticeably deranged, emotionlessly dispatching of Arcard and Roartz one minute and wildly throwing around magic the next.

However there is possibility that she values chivalry in men, and finds it disgraceful for a man to abandon a lady in need, even if it's her brother. This is seen when Zeed imagines her admonishing him for considering leaving Tiena alone in the Nabata Desert. Though whether this is actually how she feels or just an idealized assumption on Zeed's part is not clear.

While immature and inexperienced in combat, she is something of a magical prodigy, being able to wield powerful magic such as Bolting. Her skills are such that she commands both fear and respect of those who work under her, with Arcard immediately fearful of her when Roartz disrespects her.

Jemmie is illustrated in the trading card game Fire Emblem Cipher with the following cards: 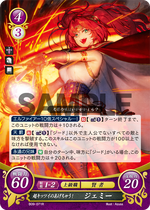 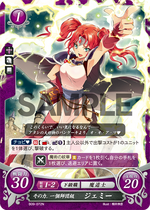 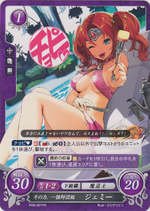