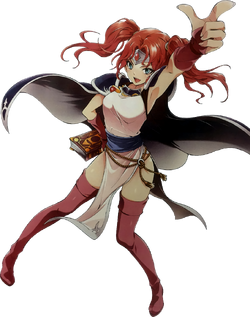 Jemmie is an enemy mage from the Fire Emblem: Hasha no Tsurugi manga.

Jemmie first appears in Chapter 17 where she used Bolting on Roy's army, killing some soldiers and setting the battering ram on fire. After Gant threw the ram at the door, she was waiting for him, using an Elfire (which she called 10x Special Elfire) on him and the soldiers behind him. When that failed due to Al's interference, she used Ain to attack them, but does not participate much further, only taunting the Lycian Army. Before she can be captured Zeed swoops in to save her.

After Narcian tells her that Zeed had died at Nabata, she is filled with a lust for revenge, killing Arcard and Roartz in a blind rage. She sets up the troops on both sides to clash on the royal road so that they would be easy targets for her and seven other mages. However, Kilmar easily slips past their defenses and quickly wipes out the seven other mages. He and Jemmie have a showdown, and although he dodges her spell and has her at swordpoint, he refuses to kill her after she admits that she had lost someone important to her. At first, she appears to surrender, but she suddenly then adds that she'd go down with him, first, and uses a powerful fire spell in hopes of having a mutual kill. However, Kilmar dodges, and Jemmie simply both sets herself on fire and falls off the platform they were standing off into the water below, creating a large explosion that kills her.

She cares deeply about her older brother, Zeed, but is cruel to everyone else. She is also very childish, but a dangerous and talented mage nonetheless.

Jemmie is illustrated in the trading card game Fire Emblem Cipher with the following cards: