Leader of a Mercenary Company

David Lodge
[view]
“In a battle you should focus on what's important. As mercenaries, we're regularly putting our lives on the line. Getting distracted with unnecessary things will land you in an early grave.”
—Jeralt talking to Byleth

Jeralt is a character in Fire Emblem: Three Houses. He is the father of the protagonist Byleth. He possesses a major Crest of Seiros.

Jeralt is a legendary knight considered the strongest in history and a former soldier of the Holy Kingdom of Faerghus. Several years ago, Jeralt was hired to escort Rhea. He took a fatal blow intended for her but Rhea healed Jeralt using her blood, giving him the Crest of Seiros. He was then hired by Rhea and brought into the Knights of Seiros. He quickly rose in ranks and became captain, eventually earning the title of Blade Breaker. During this time, he would start a family of his own, having a child named Byleth, though his wife passed away shortly after their birth.

Mistrust towards Rhea developed after the sudden death of his wife on the 20th of the Horsebow Moon 1159 from childbirth as well as Byleth's strange behavior as a newborn. Byleth did not laugh or cry as a newborn, leading to Jeralt consulting a doctor to find a reason. The doctor noted that while Byleth seemed healthy and had a pulse, they mysteriously had no heartbeat. All of these unusual circumstances lead to Jeralt breaking away from the Church of Seiros by starting a fire in the Monastery in which he claimed that the blaze took the life of his child.

Jeralt left the Knights of Seiros in order to start his own mercenary company where his reputation further spread across Fódlan. While many joined his band of mercenaries, one of his strongest members was Byleth. While Byleth was trained in combat, Jeralt provided very little information about Fódlan or the Church of Seiros.

During his mercenary work, a mission brought him to Sauin Village where he would meet a young Leonie. He would teach her simple combat and gifted her a small wooden charm before leaving. This would inspire the young girl to become a mercenary herself in Jeralt's footsteps.

One night, after conversing with Byleth about a mysterious recurring dream, a band of bandits lead by Kostas attacks a nearby village and threatens the lives of three students from the Officers Academy; Edelgard, Dimitri, and Claude. Jeralt and Byleth drive off Kostas and, after a reunion with Alois, they deliver the students safely back to the Monastery. Upon their arrival, Rhea offers the two jobs at the Monastery, with Jeralt regaining his old post as captain in the Knights of Seiros. Though reluctant, he agrees in order to keep a close eye on Byleth, and warns them to be wary of the Archbishop.

Jeralt would spend several months doing missions in the Church of Seiros's name, but would occasionally help Byleth during their initial months as a teacher. He begins to notice that Byleth's time with the students have slowly begun to change them, being able to express their emotions visibly for the first time.

The peace in Fódlan begins to unravel quickly due to the sudden appearance of the Flame Emperor, determined to conquer the continent. Additionally, a sinister group known as Those Who Slither in the Dark appear to be further spreading discord across the continent.

Flayn, Seteth's sister, is kidnapped by the Death Knight, but is eventually rescued by Byleth and their students. They also find Monica, a Black Eagles student who went missing a year prior. Feeling that something big is about to happen, Jeralt takes Byleth to his wife's grave and tells them that should something happen to him, they should search his office for something important he has hidden for them.

Near the end of the Guardian Moon, several Academy students go missing when exploring a nearby abandoned chapel. Byleth and their class investigates the ruins only to find several students attacked by monsters. They are able to defeat the monsters, but it is revealed that the beasts were actually transformed students. Among the students rescued was Monica who thanks him. However, with his back turned, Monica takes out a dagger and plunges it into Jeralt's back. Byleth desperately uses Divine Pulse in order to prevent his death, but Thales appears in the rewound time and deflects Byleth's attempt to stop Monica. Unable to stop his assassination, Jeralt apologizes to Byleth for being careless. As he expires, he notices Byleth tearing up and is touched that Byleth's first tears were for him.

Byleth would honor their father's request posthumously. They would uncover his diary, recounting his growing distrust in the Church and Rhea as well as Byleth's infancy. He also left behind his wife's ring, which he wanted Byleth to give to their lover when the time came for them to find their own happiness. He is laid to rest in the Garreg Mach Monastery Cemetery, sharing the same grave with his wife.

Jeralt is a man of honor, known in his days as a Knight of Seiros for his exceptional skill and courage in battle. He is highly respected and even idolized by many current and upcoming knights, but is modest about his title and renown. He is a capable instructor, having trained his child in the art of combat, becoming a fearsome warrior themselves. He also gave minor training to Leonie, whom he acknowledges as an apprentice of him of sorts and would later succeed him with the title of Blade Breaker.

He dearly loves his family, having spent his later years training his child and is one of the few people who are able to read Byleth's mood despite their limited externalization of emotions. His deceased wife is always on his mind, and in the instances he is at Garreg Mach Monastery, he will usually pay her grave a visit.

Jeralt is also known to be a drinker, with many conversations about him mentioning his love of bars and Alois even revealing to Leonie that he has accrued a huge amount of debt due to unpaid tavern tabs across the land, causing the former to be unable to step foot in any tavern without being badgered for payment.

Despite being a former and later re-recruited Knight of Seiros, he is not a follower of the Church of Seiros nor does he entirely trust the Church or its Archbishop, Rhea.

“I'm the one who should be complaining. I'm caught up in the mess you started!”
—Jeralt's battle quote versus Kostas in the Prologue
“Damn... Am I losing my edge?”
—Jeralt's retreat quote
“To think that the first time I saw you cry... your tears would be for me. It's sad, and yet...I'm happy for it. Thank you...kid.”
—Jeralt's final words

Jeralt is illustrated in the trading card game Fire Emblem Cipher with the following cards: 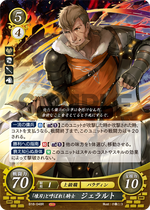 Jeralt is a derivative of the Germanic name Gerald. "Ger" means "spear" and "ald" means "rule".

Jeralt as a Paladin in Fire Emblem 0 (Cipher).