Not to be confused with the Fire Emblem Awakening character, Gerome.

General of The Rigelian Army

Sean Chiplock
[view]
“The Zofian rabble will be upon us in due time. Prepare to intercept them. ...And mind your allegiances wisely. If I smell even a whiff of betrayal, you know what will happen.”
—Jerome talking to Zeke in Echoes

Jerome (ジェローム Jerōmu, Jerowm in the Japanese version) is an enemy boss character in Fire Emblem Gaiden and its remake, Fire Emblem Echoes: Shadows of Valentia.

Jerome is a cruel general of Rigel who goes against his orders by having his men raid nearby villages, such as Rigel Village, when Rudolf is away. Jerome's treasonous actions make him hated among even the people of Rigel. Fellow Rigelian general Zeke protected the villages from him, but was forced to fight alongside him after Zeke's lover Tatiana was kidnapped by Nuibaba. After Alm rescues Tatiana, Zeke and his men turn on Jerome, who is killed in the resulting battle. 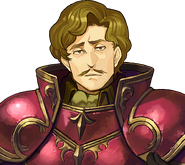 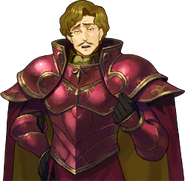