Mick Wingert
[view]
“I guess some folks just need to live by that kind of tight framework. Me railing against that wasn’t going to make anyone happy, you know? So I figure I’ll find my own place where I can live in a way that does.”
—Jesse

Jesse is a playable character in Fire Emblem Gaiden and its remake, Fire Emblem Echoes: Shadows of Valentia.

A free spirit who hates the strict rules of the household where he was constantly told what to do and not do. Jesse's father was a high-ranking Zofian nobleman, and he was in fact friends with Clive and other nobles around his age. There were high expectations for him due to his skill with the sword, but trouble arose with the birth of his younger half-brother, as Jesse himself was born to a low-ranking concubine rather than a proper wife. Most of their vassals hoped Jesse would succeed his father, but Jesse decided instead to abandon his family name and run away for the sake of his sickly brother's future.

At some point in time, Jesse encountered Silque being kidnapped by bandits. Realizing her plight, he rescued her and then accompanied her during her travels for a distance, parting at Zofia Harbour. Later on, Jesse attempted to save Est from Grieth, but was captured and imprisoned at the Desert Stronghold. When Celica's party frees him he then joins their team.

After the war, Jesse made his own nation in Grieth's land, joined by Saber and Kamui. He became known as the "Desert Mercenary King".

Jesse is a individual who enjoys life without restrictions, leading to his ambition of creating a kingdom that could not be tied down by anyone. Being very flirtatious and often smooth talking women in Celica's army, and even Celica herself, he is also quite a dreamer as shown in his supports with Saber.

In Celica's route, she gains access to three Mercenary units: Jesse, Saber, and Kamui. When considering the three Mercenary units that Celica can obtain, they can generally be simplified into 3 types. Saber is the durable, defensive Mercenary, Kamui is the all-rounder Mercenary with even stats, and Jesse is the late recruit with the best base stats and growths making him the most dangerous. An optional, Pre-Promoted Myrmidon, Deen, is also available to recruit. Deen is best described as fragile and aggressive.

Jesse can be considered a quasi Est Archetype, in that he joins a ways into the game and comes to you below your average party level. However, unlike Est, Jesse actually starts with better stats for his level than other characters of the same class. While Jesse's growths are very high, they are not quite as explosively high as Est's (Jesse having 190% total growth, and Est having 250% total in a game where the average is roughly 150%), but they are high enough where he will outshine characters of the same class. His starting level and stats should only be a little behind your current party, so giving him a sword and catching him up is perfectly feasible without any grinding. He is, overall, one of the strongest units available to Celica.

“Heh, me, of all people, falling short of the rebel image...”
—Jesse's death quote

"In the former territory of Grieth, he built a new country.
Afterwards, he became known as the Desert Mercenary."

After successfully founding a mercenary kingdom in Grieth's former land, Jesse then proved successful at ruling it. In times of strife, he worked with Alm to secure peace. Tales of his valor are told even now, in which he's reverentially called "the Steel Amidst the Sand."

Jesse is illustrated in the trading card game Fire Emblem Cipher with the following cards: 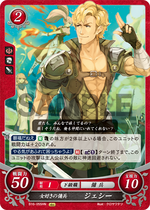