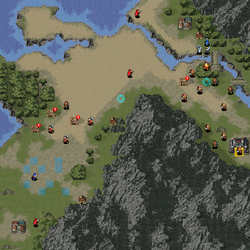 Chapter script
[view]
“Marth was unable to reunite with Princess Minerva, and so, in order to help Ogma and the Grustian royal children, he decided to visit Wendell, who was once the children's guardian. However, the "Holm Beach" where Wendell resides is dominion of the infamous Macedonian Vikings. Countless pirates await in Marth's path. Will Marth be able to safely rescue the children...?”
—Opening Narration, New Mystery of the Emblem
“Unable to reunite with Princess Minerva, Marth, in order to find Ogma and the Grustian royal children, headed to visit bishop Wendell, who once protected the children. However, the bishop resides at Holm Beach, ruled by the dreaded Macedonian Vikings. In front of Marth's path countless pirates await him. Can they really safely rescue the children...?”
—Opening Narration, Mystery of the Emblem

Joy and Sorrow is Chapter 4 of Fire Emblem: Mystery of the Emblem and its remake.

You should immediately recruit Sirius on turn 1. It is advisable that the group consisting of Ogma, Yuliya, Jubelo, and Sirius should simply defend the village where Castor resides until Marth and the others can join them, as Group 2 simply does not have the manpower to assault the castle, and bandits may attack the village in their absence.

Using Yuliya's Rescue Staff on Ogma can be a good idea as Ogma will have to take at least 3 hits, should he have recruited Sirius (if Ogma recruited Sirius on the tile directly below the bridge, he'll take 3 hits, if he recruited him in the forest, he'll take around 4 hits). Should you use this method, have Sirius take out the Hunter below the bridge to keep Yuliya safe. This method should only be used on Maniac or Lunatic difficulties, as Ogma should be able to withstand 3 hits on Normal and Hard (especially in New Mystery Of The Emblem, should he be used in the Prologue).

On lower difficulties (Normal and Hard), using the Rescue staff on Marth to recruit Castor on turn 1 is not a bad idea as Castor and Jubelo together can reliably kill the thief attacking them (also, it makes keeping "Group 2" alive a lot easier). 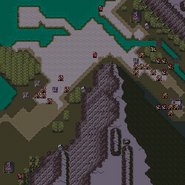