Mage
[view]
“Sure, right now... I'm still a kid, and I can't be a super-royal or anything. But... I'll do my best. Just watch! I'll grow up to be the most reliable man ever, so you won't ever need to worry!”
—Jubelo to Yuliya in New Mystery of the Emblem.

Jubelo is the younger twin of Yuliya and around 13–14 years of age. Prior to the events of Shadow Dragon and the Blade of Light and its remakes, when Dolhr began invading the continent King Ludwik, fearing for his own safety, allied with them. However Gharnef took Jubelo and his sister away to Khadein, locking them away in a pitch dark room to use their lives to further secure Ludwik's allegiance to Dolhr.

When Gharnef fled the city, the siblings were rescued by Wendell, at which point they were on the brink of death, and were taken to a monastery in Macedon to recover.

Despite Marth's protests, General Lang takes Jubelo and Yuliya away to have them executed. Before that can happen, Ogma rescues the children and leads them to Marth's army in Chapter 4, where he guides them from Wendell's home village in Holm Beach to the southeastern reaches of the region. The children then proceed to aid Marth in bringing the War of Heroes to an end.

Following the events of the game, Jubelo travels to Altea to hone his skills as a magic practitioner.

In contrast to Yuliya's confident and assertive character, Jubelo is timid and bashful. This fact is supported by his speech, where he constantly speaks in slow, halting lines, clearly indicating his self-doubt and lack of self-confidence. This is further amplified by Jubelo's tendency to make excuses to shirk his responsibilities, as is the case in his base conversations with Yuliya, where he initially attempts to evade the need to study.

In spite of these flaws, however, it is evident that Jubelo is aware of them, responding by making a concerted effort to correct them. This can be observed in his supports with Kris, where he willingly undergoes a strict training regime to strengthen himself.

Jubelo is an unimpressive unit, but not one without his merits. As a mage, he is fairly easy to raise, hitting on the low Resistance stats of enemies. His main niche relative to his fellows is a 50% Magic growth, giving him the potential to surpass characters like Linde and Merric. Unfortunately, he suffers somewhat due to lacking their personal weapons or any equivalent, along with his base stats being quite low, including a low base Magic. This tends to put him in the role of being a filler or replacement unit, especially since his high growth can be mimicked with Astral Shards. Though he is quite workable, he is not a character who tends to stand out, aside from the base utility of his class.

Jubelo is one of the worst units in New Mystery, and easily the worst of the early units. His original strong point in the form of a 50% Magic growth has been largely undone by the significantly boosted growths of many other characters - Merric, Linde, and Arlen all boast a 40% growth, closing the gap significantly. More importantly, Jubelo also boasts an uncommonly low personal Magic base of -2, meaning he actually has less Magic than a physical character reclassed into Mage. At base level, his Magic is so poor that he deals the same damage with Blizzard that a generic mage deals with Fire. With that in mind, Jubelo's Magic growth serves less to make him a magical powerhouse and more to try to dig him out of his hole; at his maximum level, he only ends up one or two points ahead of any of the prior-mentioned mages. For the rest of the game, he will be struggling to catch up to what his fellows can manage, particularly when they all boast advantages he has no counterpart to, such as Nosferatu access or higher base level. Though reclassing seems like a means of solving Jubelo's problems, his pathetic performance as a mage is actually his best option. He has no physical weapon ranks and a Strength personal base and growth of 0, giving him some of the worst physical offense in the game. This makes keeping him in Mage and attempting to salvage his base Magic his only particularly good option, something that will take a great deal of time for little reward.

"Overseen by King Marth, he studied hard at Altea."

Jubelo is illustrated in the trading card game with the following cards: 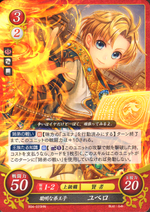 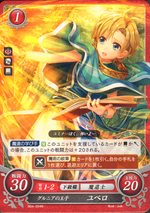 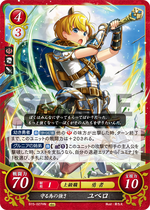 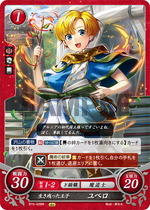 The name "Jubelo" comes from Samuel Pritchard's Three Distinct Knocks, where Jubello (alongside Jubela and Jubelum) were three ruffians who murdered Hiram Abiff in King Solomon's Temple after they fail to obtain him from the Master Masons' secret passwords.

The fan translated name Jubelo is a mistranslation of Jubelo.