Jugdral (ユグドラル Yugudoraru; adjective Jugdrali) is the continent on which Fire Emblem: Genealogy of the Holy War and Fire Emblem: Thracia 776 take place. Supposedly situated in the same world as Archanea/Ylisse and Valentia/Valm, its position is unclear. Several nations that occupy the continent were mostly founded by the Twelve Crusaders.

At a time in when Archanea was still becoming a civilization, Jugdral already housed an advanced human population. The Kingdom of Gran, later a republic, enjoyed four hundred years of peaceful and prosperous existence, until its destruction in 447 with the rise of the Loptrian Empire, a brutal regime controlled by the Earth Dragon Loptous through possession of its rulers, the lineage of Emperor Gair. For nearly two hundred years, the Loptrian Empire held a violent, oppressive hold on the land until, sixteen years after the turning point that was the Miracle of Dahna, Gair XVII was slain by the dragon-blessed Twelve Crusaders.

With the Loptous Empire's fall, the Crusaders gave rise to numerous new nations across Jugdral. After a little over a century of peace came a period of unrest and upheaval, starting with a war between Grannvale and Isaach over reports of an attack on Darna Fortress in 757, and culminating with the conquest of much of Jugdral by Grannvale's forces and the rise of Emperor Arvis by 761. Despite Arvis' best intentions, his son Julius - inadvertent inheritor of the lineage of Loptous - perverted Grannvale into a tyrannical force and an effective second coming of the Empire. Even as the return of Loptous's control to Jugdral seemed absolute, a revolution occurred in 777 under the leadership of Seliph, the rightful heir to Grannvale's throne, which resulted in the defeat of Julius and the fall of Grannvale's control over Jugdral.

Founded by the Crusader Heim, Belhalla is the capital city of Grannvale and has primacy over the other six duchies of the kingdom. The royal family of Grannvale comes through the line of Heim and the blood of Naga. The knights of Belhalla are the Weiss Ritter (White Knights), an elite squad of knights and mages. Notable natives of Belhalla include Azmur, Kurth, Julia, and Julius.

Chalphy is situated in the southern portion of Grannvale, and is the dominion of the Crusader Baldr and his descendants. Chalphy is home to the protagonist of Genealogy of the Holy War, Sigurd, as well as his father, Byron, and many other characters in the game. The elite knights of Chalphy are the Gruenen Ritter (Green Knights), who wield swords. After the events of Genealogy of the Holy War, Oifey becomes the Duke of Chalphy.

Yngvi was founded by the Crusader Ullr. It is located in the southwest of Grannvale, on the border with the barbarous country of Verdane. The knights of Yngvi are the Beige Ritter (Beige Knights), who wield bows. Notable natives of Yngvi are Duke Ring, his children Edain, Brigid, and Andrey, and their children, including Scipio.

The home of Thrud and his descendants, Friege is located in western Grannvale. The knights of Friege specialize in Thunder magic and are called the Gelben Ritter (Yellow Knights). Duke Reptor is the ruler of Friege in the first generation, and other natives include his children Bloom, Tailtiu, and Ethnia, and is further the homeland of their children, including Ishtar and Ishtore.

Dozel is lorded over by the descendants of Nál, wielders of his axe. The knights of Dozel, the Grauen Ritter (Grey Knights) are axemen. Dozel is located southwest of Belhalla. Its notable natives include Lombard, Lex, Danann, and his three sons, Brian, Iuchar, and Iucharba.

Home of the Roten Ritter (Red Knights), elite fire mages, Velthomer was founded by the Crusader Fjalar. It is located on the eastern extremity of Grannvale, bordering on the Aed Desert. Notable inhabitants include Victor, Arvis, Aida, Saias, and Azelle. Manfroy stows the holy Book of Naga away in the city.

The seat of the church of Bragi and the worship of Naga, Edda is a city in southeastern Grannvale. It is unknown if the city has its own squad of knights, though if it did, it would most likely be a unit of staff-wielders and healers, matching the founding Crusader. Bishop Claud and Sylvia are notable inhabitants of Edda.

Founded by the Crusader Hoðr, Agustria is comprised of a collective of noble houses in servitude to the royal family. However, Hoðr's Holy Blood is carried not by the royal family, but by House Nordion. Nordion's elite Cross Knights serve under House Nordion, but pledge fealty to the king. Notable inhabitants of Agustria include Chagall, Eldigan, Lachesis, Beowulf, and Ares.

The most northern region of Jugdral, Silesse was founded by the Crusader Ced. Blanketed in snow for much of the year, its terrain made it resistant to invasion for much of its history, resulting in its culture of neutrality among the other nations. Silesse is notable for its use of Wind Magic and its mounted pegasus cavalry. The four Falcon Knights of Silesse are Erinys, Deet'var, Annand, and Pamela. Other notable inhabitants are Queen Rahna, prince Lewyn, Daccar, Maios, Musar, and Karin.

The northeasternmost nation of Jugdral founded by the Crusader Od, Isaach is renowned for its unique and talented warrior culture, centered around the art of swordplay. Notable inhabitants include Mananan, Mariccle, Ayra, Chulainn, Galzus, Mareeta, and Shannan.

Originally a single nation occupying the entire peninsula, founded jointly by sibling Crusaders Njörun and Dain, a schism between the two tore it into two nations, the Munster District and Thracia.

A nation occupying the southern half of the Thracian Peninsula, Thracia has the vast majority of its land dominated by mountains and very little suited for farming, thus the nation has historically survived through hiring out its famed Wyvern Riders and Dragon Knights as mercenaries. It is ruled by the descendants of Dáinn, wielders of the Gungnir lance, which include King Travant and prince Arion. Hannibal, Dean, Coruta, and many others also hail from this country.

The territory occupying the northern half of the Thracian Peninsula, the Munster District is a coalition of four small allied kingdoms in addition to a small number of free cities. Holding great swaths of lush and fertile land, the District's territory has repelled many attempts of conquest by Thracia. Prime among these is the city of Leonster, home to the line of Njörun and wielders of the holy lance Gáe Bolg, and their elite knights, the Lance Ritter.

Though founded at the same time as the other nations, Verdane is one of the few not to have been founded by a Crusader and thus not possessing a holy lineage. The nation's regular belligerent incursions into the territory of neighboring Grannvale earned it a reputation as a "barbarian kingdom".

Not possessing Crusader lineage as well, the Republic of Miletos is a prominent trade hub, and as a result, is among the wealthiest, prosperous and most prominent centers of Jugdrali commerce.

An ancient empire that ruled Jugdral for over two centuries, it was founded by Emperor Gair I after making a blood pact with the earth dragon Loptous in order to subjugate the continent. It was ruled by a lineage of seventeen consecutive Emperors Gair all serving as vessels for Loptous, who was worshiped as the Dark God. The empire was toppled by the Twelve Crusaders and Crusader Maera, brother of Emperor Gair XVII. Though the Loptrian Empire fell, the Loptr Church wants to revive the dark god and reform the empire through the manipulation of Maera's descendants. 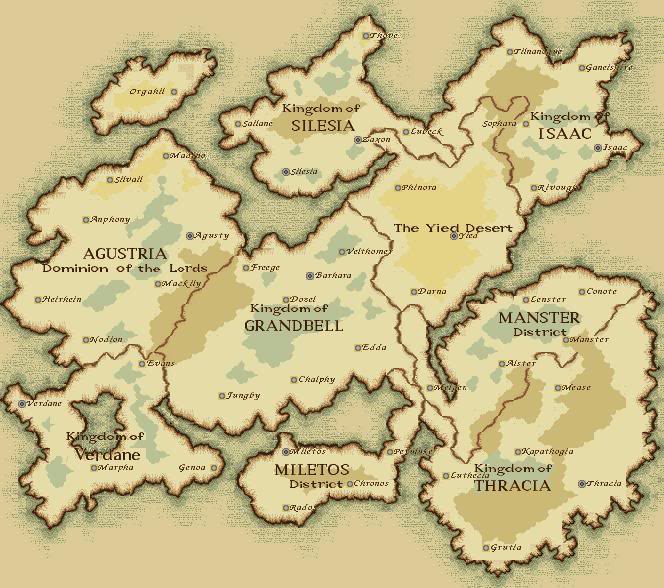 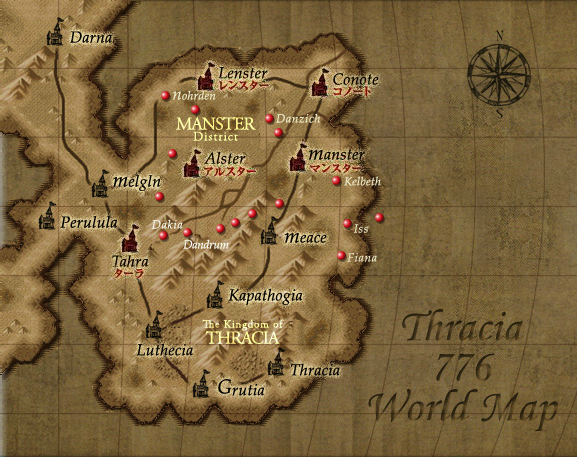 Jugdral is derived from Yggdrassil, the world tree in Norse mythology.

The world map of Fire Emblem: Thracia 776 featuring the southeast portion of the continent.