Cassandra Lee Morris
[view]
“For the first time in my life I know what I'm here for. And that's to fight... I'm not scared anymore, Seliph.”
—Julia in the Final Chapter of Genealogy of the Holy War.

Julia is a playable character from Fire Emblem: Genealogy of the Holy War. She is the daughter of Arvis and Deirdre, the younger twin sister of Julius, and the younger half-sister of both Seliph and Saias. She is the descendant of Heim on her mother's side, Fjalar on her father's side, and Saint Maera on both sides. Cigyun, Kurth, and Victor are her grandparents.

Sometime before the second generation begins, Julius obtains the Loptous tome from Manfroy and is thus possessed, causing him to kill Deirdre. Before her death, however, Deirdre managed to warp Julia out of the castle to safety. As a result of the trauma she suffers from the incident, Julia ends up losing her memories. Julia is then found by Lewyn, who cares for her until Seliph chances upon them after retaking Ganeishire, whereupon Julia will join the liberation army. Seliph will then give her either the Nosferatu or Aura tome, who picks it up at the castle he conquers after her enlistment.

When she first appears in Chapter 6, Julia seems to be shy and quiet, due to her losing memories of her family. But as the story progresses, she gains confidence in her magical abilities and the courage to fight. It is also noted that she is capable of selflessness by increasing Seliph's magic resistance despite the fact that the spell is known for taking a toll on the caster.

Once she recovers her memories in the Final Chapter, Julia immediately realizes that Julius is being possessed by the evil god Loptous, indicating that she can be quite perceptive. After Manfroy is killed, Seliph can talk to Julia and break her free of the spell controlling her. She then claims that she finally knows her purpose, and that it's to fight Julius with the power of Naga coursing through her veins.

Overall, Julia is a kind-hearted person with great inner-strength that she was able to develop during her journey with Seliph. She faces the ordeals ahead of her with unwavering will and will not hesitate to put her life on the line for everyone.

As a result of her strong growths in Magic, Julia will always make an extremely competent healer, so ensure Lana/Muirne speaks to her in Chapter 6, after Ganeishire Castle is subjugated (This will result in her attaining a Mend Staff).

Another thing to note about Julia is her promotion. Her promotion gives her huge stat gains, but the most important ones being the +8 to Speed and the +5 to skill two stats that she has a poor growth in (although her good base in speed, makes up for the bad growth). Many times Julia will reach 19 to 23 speed on average after promotion, making her able to double many enemies, especially the ones wielding Axes and Lances. The +1 to movement also helps her get through Gen 2's huge maps, although she will still lag behind your mounted units.

When Julia is re-recruited in the final chapter, she will obtain the Book of Naga upon visiting Velthomer. At this stage in the game, she becomes extremely formidable, as this tome increases both her speed and skill by 20 points, her defense and resistance by 20 points, and has the ability to nullify the effects of the Loptous tome. Naga's usability still hinges moderately on the stats Julia possesses by that point in the game, though this should only be a cause for worry when facing off against the Dark Warlords.

In Chapter 6, Lana/Muirne may speak to Julia, and she will gain a Mend Staff.

In Chapter 6, if Seliph captures Isaach Castle before seizing Sophara Castle, Julia may speak to him, and she will gain a tome of Nosferatu. Aura cannot be attained when this happens.

In Chapter 6, if Seliph captures Sophara Castle before seizing Isaach Castle, Julia may speak to Seliph, and she will gain a tome of Aura. Nosferatu cannot be attained when this happens.

In Chapter 8, if Ishtar has not made her appearance yet, Julia may speak to Seliph, and he will gain one point of luck.

Julia is a unique character, in the sense that she possesses absolutely no love points or growths with anyone apart from Seliph, with whom she has a negative love growth, and their starting love points can be either 0 or 490, depending on certain obscure conditions. However, through exploitation of a bug caused by the Jealousy System with Lana/Muirne and Larcei/Creidne, it is possible to cause her and Seliph to fall in love. Furthermore, she still gains love points with units she is placed next to normally, so she can still end up with another lover if kept by their side for 100 turns.

Theoretically, there is enough time for any unit except possibly Coirpre/Sharlow to fall in love with her by the end of the game, but realistically only units that are recruited in Chapter 6 stand a good chance. As the only male unit recruited in Chapter 6 who shares her pre-promotion movement rate, Arthur is the best choice.

Naga's Blood
Inheritor of the Book of Naga. Seliph's half sister by a different father. Gentle, yet faces her destiny with strength. Appears in Fire Emblem: Genealogy of the Holy War.

As one of the earliest units released in the initial months of Heroes, Julia helped to shape the Meta as one of the rare Infantry Green mages. Her standout Atk is remarkably high for a Mage and her Res allows great combat against blue mages and is situational against some green mages. Unfortunately, her middling Spd and pitiful physical bulk leaves her vulnerable, and a frequent target of most sword units.

Nevertheless, Julia is blessed to wield a powerful Tome, Naga, shaping her into a powerful anti-dragon unit which has been a persistent meta threat since the Weapon Refinery mechanic was introduced. It also grants her a Bracing Stance 1 effect when an enemy initiates on her, granting her a small defensive buff. It is a minuscule buff, but ultimately inconsequential against her intended targets as they can freely choose to target her much lower Def since she is ranged unit. However, if refined, Naga forces dragon units to calculate their damage against her Res and grants her Close Counter when attacked by a Dragon unit, cementing her as one of the strongest counters against blue and green dragons and against some reds in certain situations. It also grants her a Bracing Stance 2 effect, giving her just a slightly better defensive buff when attacked.

Julia’s remaining kit starts with Dragon Fang which takes full advantage of her high Atk. Her remaining kit is quite unassuming as Res +3 is a minor stat boost and Breath of Life heals 7 HP to allies adjacent to her when she initiates attack, which has applications, but more used in a gimmicky manner.

Her low physical bulk are an easy target for all manner of physical units. Just about all red non-dragon physical units easily run through her while most bow units can as well, leaving her vulnerable to a wide range of common, high meta units. Kagero’s Poison Dagger easily rends her as well. High speed red mages like Celica, Katarina, and Tharja can run through her with their superior Spd, despite having to target her high Res. Some explosive Red Mages, such as Lilina and Sanaki, can simply overwhelm her with powerful attacks.

Save for her Weapon, most of her kit requires a huge overhaul. Dragon Fang is her recommended special, but one could also opt for Iceberg in certain situations. Draw Back is a safe skill to manipulate allies and pull them from danger while keeping her out of harm’s way when doing so.

Julia’s focus on her Refined Naga tome suggests that she be built defensively to counter these units. She can take Atk/Res Bond to boost herself during combat when adjacent to allies or an alternative, which requires sacrificing a Gharnef, can give her Mirror Stance, further pushing her Res when attacked by her intended Dragons and Mages while gifting her a boost to her Atk. Fury is a general usage inheritance with a solid stat boost, but mainly for the flat Atk and Res boost and just a bit more Def to give her a little more survivability against some units. Her low Spd makes her an excellent candidate for Quick Riposte as it negates her Spd issue and guarantees a follow-up granted that she is within the HP threshold. Her Skill C is flexible, though Atk Wave skills are good for the self buff. Her Res is also high enough that Ploy skills work well on her as well.

Julia can also perform as an offensive turn nuke as she has the Atk to potentially ORKO some units if she takes Death Blowas her A skill and Special Spiral to accelerate her special cooldown. Her skill c is still the same as above as the self-buff or ploy effect works to her overall favor. Her Special can be changed to Luna to negate half of her enemy’s res. This is a slightly more gimmicky load out, but still functional as she still can maintain her enemy turn capabilities, but fit to perform in both turns rather than a pure focus.

Crusader of Light
Princess of Grannvale. As the inheritor of the Book of Naga, she must perform her duties in spite of the obstacles before her. Appears in Fire Emblem: Genealogy of the Holy War.

"And, at Seliph's side, there is the presence of
[...]
The Imperial Princess Julia, who’s watching over him warmly." 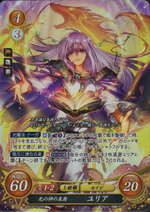 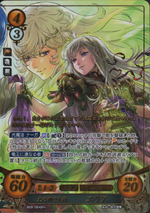 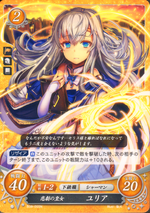 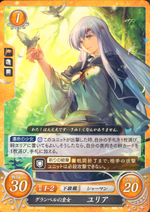 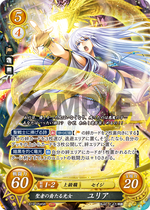 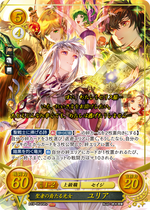 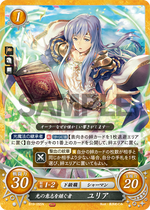 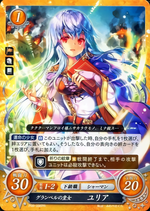