“No, I've only been a mercenary for half a year. This is only my third battle. But I do have confidence in my sword arm. My father taught me swordplay ever since I was a little girl. He was... Oh, this isn't the time for reminiscing, is it? You seem to be nice enough, Lord Runan. I'll allow you to hire me.”
—Julia, in a conversation with Runan

Julia (ジュリア Juria) is a playable character from TearRing Saga: Utna Heroes Saga. She is the daughter of Yoda and the adopted sister of Shigen.

As a child, Julia often climbed into Shigen's bed and asked him to read stories and sing to her. During many nights, she was too afraid to sleep and relied on Shigen to look out for her. When she first began her training as a swordfighter, she could not bring herself to kill insects. She frequently lost her nerve from stress and drank wine to keep herself going. Without Yoda's permission, she left their home on Il Island in order to become a mercenary and improve her fighting skills. She was eventually hired in Reeve, where she witnessed Rentzenheimer's murder of his own mother. After pinning the blame for his crime on Julia, Rentzenheimer attempted to kill her, but she managed to escape. Some time later, she was hired to protect the village of Taurus from bandits.

Julia is introduced when she is defending Taurus from a bandit attack. When Runan comes to the villagers' aid, she enlists in his army. In a conversation with Garo, she reveals that a man in service to Vals saved her from pirates around fifteen years prior to the game's events. She asks if Garo knows anything about the man, whilst Garo stays doesn't give a direct answer, Julia is able to figure out that he was actually the man who saved her and is thankful.

During a battle in the Gram Forest, Julia encounters Vega, whom Rentzenheimer hired to hunt her down. After she is bested by Vega in a duel, he realizes that he has been tricked by Rentzenheimer and gives a Healing Fruit to her so that she can heal her wounds. If she is sent with Runan's army after the second route split, she can obtain the ☆Rukuud from Rentzenheimer by defeating him. If she is sent with Holmes instead, she learns the Dragon Saint skill after being bested by her father in a duel.

Depending on events triggered during the story, Julia can accompany Shigen while he travels around the world with Runan, Holmes, Enteh, and Katri in the ending.

Since her childhood, Julia has been a softhearted and somewhat shy woman as a result of being scared by the stories about the atrocities committed against Zoans. She wants to become strong like her father and Shigen, both of whom she considers to be superior swordmasters. For this reasons, she observes Vega's behavior, much to his annoyance. Due to her hesitation with her sword and lack of willingness to needlessly kill, she wonders if she is truly fit to be a swordmaster. She also appears to be a tomboy, but becomes more feminine in the ending, to which Shigen reacts positively.

The support with Garo will appear if the player chooses the listen to Julia's story during the cutscene in map 3. Her support with Shigen will increase to 15% if they are both in Holmes group in map 29.

Out of the four swordfighters recruited, Julia has the lowest strength and ties for the highest skill and speed growths. While she is a mixed bag statistically, she has excellent skills. However, so do Vega and Shigen, and they possess very powerful personal swords while she does not. Using her may not be worth the trouble, as she is outclassed by Vega and Shigen in terms of physical power. Regardless, she can still be a valuable part of the player's team if she is trained up. 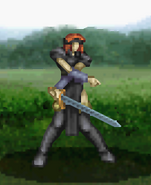