Chapter 3: A Brush in the Teeth (Shadow Dragon and the Blade of Light)
Chapter 3: Abducted Princess (Mystery of the Emblem)

Julian is a playable character from the Archanea Series of Fire Emblem. A former member of the Soothsire band of thieves, Julian, upon falling in love with Macedonian cleric Lena, makes the resolution to abandon his thieving ways. Thereafter referring to himself as an "Ally of Justice", he aids Prince Marth's army in their entourages in both wars. Julian is also acquainted with Rickard, who affectionately refers to him as "Chief".

Julian makes his first appearance in Chapter 3 of Shadow Dragon and the Blade of Light, where he betrays the Soothsires by rescuing Lena from their stronghold within the domains of the Samsooth Mountains. Aware that Marth's army is approaching the foot of the mountain range from the southeast, Julian guides her to them accordingly after hastily brushing aside her attempt to return to the stronghold to retrieve her misplaced Mend staff. After entrusting Lena into Marth's custody, Julian surrenders to him, and is thereafter granted the opportunity to atone for the crimes that he had committed during his tenure with the Soothsires by joining the army's ranks. Julian will then assist Marth in bringing the War of Shadows to a conclusion, before swearing off thievery and moving to Macedon to make a living through honest means.

Julian returns in Chapter 3 of Book 2 in Mystery of the Emblem, where it is revealed that following the end of the War of Darkness, he had taken up residence in a Macedonian village with Lena, caring for orphans in a convent. When urged to lead Lena to the safety of Marth's approaching army by Palla, Julian reveals that Lena had disappeared under mysterious circumstances, before returning to the village to source for information on her whereabouts. When Marth later pays a visit to this village, Julian appears to greet him, where he explains that Lena had most likely been abducted by a "strange priest". Julian then agrees to join Marth's entourage on Marth's behest, proving to be instrumental in convincing Matthis to defect from Macedon's army in the same chapter.

Later in Chapter 24, Julian is permitted to join the battle against Medeus, where he proves to be instrumental in rousing Lena from the reverie that she had been placed under. Medeus is felled by Marth shortly after all four noble priestesses are rescued, and following the termination of the War of Heroes, Julian formally weds Lena and thereafter leads a life of serenity with her in Macedon, caring for orphans in a convent.

Despite the fact that he, as a former member of the Soothsires, once engaged in the wicked, deceitful act of thievery, Julian evidently possesses a heart of gold, one that is catalytically triggered when he first meets Lena and falls in love with her, spurring him into resolving to abandon his past and lead a life of honesty for her sake.

Julian has been portrayed as a very devoted lover, a fact that sees him expending every ounce of his free time during the War of Heroes investigating Lena's disappearance. His love for Lena is further explicated in his base conversations with Kris in New Mystery of the Emblem, where he, blaming his weak combat skills for having been responsible for his inability to protect Lena, requests for Kris to train him in this regard. Though crude in his mannerisms and speech, Julian has nevertheless been portrayed as quite the romantic, as can be observed through his conversation with Lena in Chapter 24 of Book 2 in Mystery of the Emblem, where he expresses joy at seeing her smile and hearing her voice.

Through his base conversations with Rickard, Julian is also portrayed to be an individual who can be sly and cunning when he chooses to be, as he constantly employs reverse psychology on Rickard in order to guilt-trip him into confessing to succumbing to the temptation of thievery.

The first thing to stick out about Julian is his growth rates, which are abnormally high. Unfortunately, he suffers due to two factors: he cannot promote, and he has a 0% growth in Weapon Level and a very low base. When fully-raised, he can have rather high stats, but this will be held back by him being unable to use anything stronger than an iron sword, unless he opts for the risky and inaccurate Devil Sword; a Manual can allay these issues somewhat, but he still cannot use a Silver Sword. He can outdo some of the weaker characters, but as a dedicated combat unit, he will never be as great as units like Ogma or Abel. That said, being a Thief gives Julian a natural level of utility over other characters. He can unlock doors and chests without needing an item; Marth can also unlock chests, but Marth is often busy with other duties. He also has fairly high Movement, helping him keep up with the rest of the army. One unusual trait of his is that Thieves occupy an unusually high priority in enemy AI, which can allow him to bait enemies away from others. In general, Julian is a helpful utility character, and though there is little reason to train him for battle, it can be done if need be.

Julian has lost the odd priority rules of his old self, but has gained a Weapon Level growth. This means that he now has the potential to use stronger swords, making the idea of training him for combat much more appealing (especially as he is required for the later chapters and the best ending). In Book 2, he also has a substantially better base Strength of 7 and base Weapon Level of 6, pushing him considerably further in combat. He remains mostly unimpressive, but he can actually contribute somewhat in the final chapter after investment.

Though the Shadow Dragon version of Julian has good growth rates, his terrible weapon rank of E, low bases, swordlock, and lack of promotion mean that he is a largely incompetent fighter. If given a forged Iron Sword, he can compensate somewhat for his bad start, but the massive number of lance enemies in most chapters after his joining time can cause even a skilled sword-user like Ogma to struggle. Julian is at least fast enough to avoid being doubled, but his combat merits outside of that are largely negligible. This isn't too much of an issue for Julian, as the main thing he should be doing is unlocking chests and doors, something he doesn't need training to accomplish. He can perform thief duties adequately, and is the best character to fulfill those tasks if Marth is busy, but is too flawed to function well as a combat unit outside of Normal difficulty.

In New Mystery of the Emblem, Julian retains many of the traits of his Shadow Dragon counterpart, albeit with the gain that the significantly increased enemy variety allows him to gain weapon triangle against axe enemies. His growth rates, as before, are high, but are held back by his low base stats and inability to promote, meaning his raised stats barring Speed tend to be mediocre. He is also harmed by his Thief class, which has very low stat caps, and he cannot reclass at all. The existence of the Fire Emblem also makes his thief utility questionable. Julian is required for the final chapter, but it is generally easier to simply keep him protected then, rather than spend the whole game trying to train him.

Tender Thief
A reformed thief who takes the War of Shadows as a chance to atone for his crimes. Lives and works in a covent with Sister Lena. Appears in Fire Emblem: Mystery of the Emblem.

"He gave up thievery and worked in Macedon."

"Along with Lena, he cared for orphans at a monastery in Macedon."

(If Lena died)
"He continued his beloved Lena’s will and cared for orphans."

"Julian gave up thievery for good and found an honest job in Macedon."

"Together with Lena, Julian cared for orphans at a convent in Macedon."

Julian is illustrated in the trading card game Fire Emblem Cipher with the following cards: 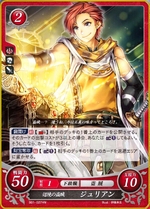 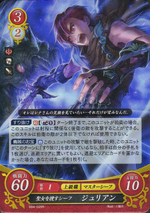 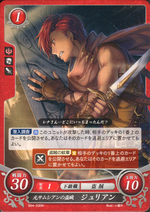