Julius (Genealogy of the Holy War)

Chapter 10: Light and Dark (Genealogy of the Holy War)

Griffin Burns
[view]
“I am the heir of Loptous's kin, and the inheritor of his limitless power. This world belongs rightfully to me.”
—Julius

Julius is the main antagonist in the second generation of Fire Emblem: Genealogy of the Holy War. He is the son of Arvis and Deirdre, who were deliberately brought together by Manfroy in order to ensure that they would deliver the reincarnation of Loptous as their offspring. He is also the older twin brother of Julia, the half-brother of Saias and Seliph, and the grandson of Victor, Cigyun and Kurth.

Despite merely being the imperial prince, Julius is the main ruler of the Empire, as Arvis is powerless to stop his actions. This is essentially due to Azmur's dying request for Arvis to allow his son to take control of the Empire when he reached a suitable age.

Before the beginning of the Second Generation, Manfroy bestows upon Julius the tome of Loptous, which corrupts Julius and leads him to take over the Grannvale Empire. During this time, Julius begins to destroy all traces of Heim's descendants, including killing his mother Deirdre and hunting down his twin sister Julia. Julius is also responsible for the horrific Child Hunts that take place both in the events of Genealogy of the Holy War and Thracia 776, in which children are brutally trialed and brainwashed to serve Loptous.

Julius eventually makes his last stand in Belhalla, where alongside his twelve Deadlords, he faces off against the Liberation Army led by his half-brother Seliph. After his defeat, Loptous dissipates into nothingness. If Seliph deals the finishing blow, Julius warns him that he will return so long as humans are controlled by greed. If Julia does it, he curses Naga for defeating him again. If any other unit deals the finishing blow, Julius simply delivers an anguished cry of defeat.

Julius' character as an individual is not explicitly revealed throughout the course of the game, as his actions are strongly influenced or even controlled by Loptous. Under the influence of Loptous, however, Julius is an extremely cold and cruel individual with a very high opinion of himself and his abilities. Several elements of Julius' original state are, however implied, as can be seen in the case of his relationship with Ishtar, whom he seems to harbor true affections for.

Julius appears to genuinely be in love with Ishtar, who seems to be the only person that he actually cares for. He has been shown to express jealousy towards other male individuals getting close to her, as can be seen in Thracia 776, whereby he comments on how he dislikes Reinhardt and the manner in which he gazes upon Ishtar.

During the Final Chapter, it is revealed by Julia that Julius was once a very kind and caring brother before he was corrupted by the tome of Loptous.

Julius is fought very differently in his two encounters. In Chapter 10, he has capped magic and a Leg Ring, but he is missing Nihil. It is more than sufficient to simply defeat Ishtar to make him leave the battlefield. If the player so wishes to fight him, he/she will need to be able to land several critical hits upon Julius, as the effect of his Loptous tome still renders him almost-invincible. Alternatively, he will also leave the battlefield with Ishtar if either of them manages to take down any of the player's units or a berserked enemy, or if the player seizes the Miletos Castle. There are potentially two approaches to this: you can draw out both Julius and Ishtar by placing one unit in Julius's range; or you could have your Dancer just out of Julius's range, then send her in and Dance some mounted units far enough to take Miletos or take out Ishtar. In the former tactic, perhaps the best candidate to draw out Julius is Shannan: with the Balmung boosting his Speed to tremendous heights, positioning him in a forest to boost Avoid, and supported by units with Charm and Seliph's leadership stars, Shannan becomes very unlikely for Julius to hit. Ishtar is then easily defeated by a Forseti user or Ares.

In the Final Chapter, Julius does not move due to him guarding Belhalla Castle. In this encounter, Julius' magic has been reduced to 25, but as a result of possessing the Meteor tome and the Nihil skill, taking him down is made that much harder. To top it all off, 12 Deadlords protect Julius from harm, and may prove to be rather formidable foes.

After the Deadlords are defeated, position Julia in such a way that she is supported by the Charm skill and Seliph before engaging Julius in a battle with the Book of Naga. If Julia had somehow fallen prior to the battle against Julius, it is thus recommended to equip both Seliph and Ares with Power Rings, before utilizing the duo to engage Julius in battle. They're the only units in the game who have both Resistance to withstand hits from Loptous and enough Power to do more than 1 damage. While Febail and Altena technically have higher attack power, Febail lacks Canto, and both have low Resistance, meaning a Critical hit will spell their doom. As the game is programmed to always have Julius attack Seliph when he is in front of him, it is thus recommended for Seliph to be positioned at the entrance of the Castle of Belhalla at all times. This will essentially prevent Julius from attacking any other units with the Meteor spell.

If the player fails to recruit Julia, or she is dead, an alternative strategy can be used to kill Julius. If you manage to Berserk Gallus (with the Berserk Edge/Berserk Staff), he has about a 33% chance to reduce Julius' HP to 1, at which point he can be killed with anything (as attacks do a minimum of 1 damage as long as they hit and do not trigger Pavise). Be sure to eliminate the other deadlords beforehand and make sure that Julius is the only thing Gallus can attack when he goes Berserk. Needless to say, savescumming using mid-chapter saves is likely needed.

Scion of Darkness
Prince of the Grannvale Empire. Was once a kind boy but suddenly came to have a cruel nature. Appears in Fire Emblem: Genealogy of the Holy War.

Julius comes via Grand Hero Battle, summoning the 12 Deadlords to battle against the player's army.

Should the player prevail, they will be rewarded with an undeniably unique mage with huge Attack and Resistance, bolstered further by his unique tome, Loptous. This tome is his selling point; not only does it considerably bolster both of his best stats, but whenever he enters combat against anyone whose weapon doesn't deal bonus damage to dragons - regardless of phase - he reduces their attack by 6. When combined with 38/38 magical bulk, very few mages can even touch Julius, not even some blue mages. In fact, the only Dragon-effective tomes in the game have a triangle disadvantage against Julius. However, the tome also causes Julius to take effective damage from Dragon-effective weapons, making him exceptionally vulnerable to Falchion, Breath of Fog or refined Binding Blade.

The rest of Julius's base kit is geared to laughing off damage from enemy mages. Guard prevents them from triggering their Specials against him (except the odd Heavy Blade user), Attack Ploy can their Attack before they even get to him, and Draconic Aura is the tome that lets him blast the foe with massive damage in retaliation. He can't however, totally shrug off damage from melee attackers, as his Defense - the lowest in the game among free units - can't be totally patched by Loptous's damage reduction. Add to that his rather poor speed, and he will bow to any melee attacker.

The direct counters to Julius are scarce, as many weaknesses can be patched by the proper Skill Inheritance options (see below). However, fast lance cavalry will consistently win matchups against him, with Peri getting a special mention due to her high Resistance. You can also bet on archers doing particularly well against him, especially those armed with a Brave Bow+. If Julius does away with Guard, high-damage Specials also become a threat. Any of the Falchion users will also kill Julius easily, as effective damage, combined with Julius' low defense will result in him dying in a single blow - Chrom (Knight Exalt) is particularly good at this due to being cavalry. Any variant of Tiki will also easily kill him with Breath of Fog or Summer's Breath. Lastly, area-of-effect specials like Blazing Thunder bypass Loptous's effect to deal very noteworthy damage, and possibly lead to Julius's demise during combat.

Julius can build to counter many different units - even physical ones - but the most popular route is to strengthen his ability to shrug off ranged damage, with Distant Defense - both as an inherited A-skill, and a seal. When combined with the two instances of DD, along with Quick Riposte in the B-slot and his native Attack Ploy, Loptous enables Julius to tank and KO nearly every mage in the game - even the infamous Quickened Pulse Moonbow Reinhardt! He also gains the ability to answer to dagger users and archers, albeit in limited fashion.

As for the rest of your kit, you can keep his base Draconic Aura special, but Iceberg will do slightly more damage due to scaling off his Resistance, so go for it if you have anyone whom he can inherit the skill from. Your Assist slot ultimately depends on your team composition's needs.

Julius is illustrated in the trading card game with the following cards: 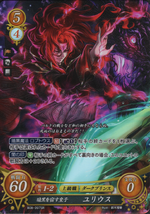 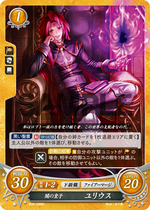 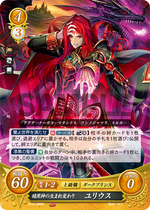 Julius is a Roman family name that is associated with the line of emperors.