Chapter 20A: The Liberation of Ilia

Suzie Yeung
[view]
“I'm fighting because I'm her mother. I want to raise her in a peaceful time without war.”
—Juno to Zelot

Juno is a playable character. She is Zelot's wife and the oldest of the three Pegasus Knight sisters in Fire Emblem: The Binding Blade, although she is already a Falcon Knight.

Juno is married to Zelot. In Heroes, it's revealed that she met her future husband on an Etrurian battlefield. They had been hired by opposite factions. Rather than fight, Zelot tried to reason with her and their relationship grew from there. Afterwards they have a daughter, which neither of them had enough time to see, because of their duty as mercenaries. She gave birth to her child when Zelot was far away in mission, so he never met their newborn. She was forced to entrust her baby to a close friend, so she could have the ends met by keeping with her work as a mercenary.

When her parents died when she was little, she raised her young sisters Thea and Shanna as if they were her children. They often work separately though, and fear that one day they would need to face each other in battle. This kind of dynamic is exemplified by the tragedy involving Juno's close friend of Sigune, a mercenary hired by the opposite army, that was killed by Roy's army in Bern.

Juno can be only recruited in Ilia's route, in chapter 21. She is rescued after being kept as a hostage in her own castle in Edessa with some civilians after it was invaded by general Murdock of Bern. She decided to fight back, alongise Etruria's army lead by Roy, when it arrives the capital. She succesfuly survives and join Roy's army if talked by her husband Zelot, or her sisters Thea or Shanna.

After liberating Ilia, Juno, alongside her sisters and husband, lead Roy to where Maltet, the Divine Weapon of Barigan, is hidden.

When the war ends, she returns to Edessa, the capital of Ilia, and works to unify the Pegasus knights of Ilia. Her husband also leads the knights union, and they became the first queen and king of Ilia.

Juno is a visionary, calm and nurturing person. She’s sensible and understands the complicated situation in which she lives. Even being a new mother, she gets offended when others suggest her to leave the battlefield and return home to be with her child. She refuses to stop fighting, arguing that she battles for a better future in which her daughter, sisters and other Ilian mercenaries can live in a world without hardships and war. She desires a a brighter life where she and Zealot can be a stable family. She never loses hope and does look forward to a more peaceful world. Her idealistic views contrast with Zealot’s cynicism towards the future.

She is a very caring person. She is always looking after her younger sisters and being sure that the squad of her husband is well. She sees Shanna and Thea as little girls. She is touched by Trec's dreams of a peaceful future and spring in Ilia, realizing that he and other Ilians also share the same dreams as her.

Juno can only be recruited on the Ilia route, so it is important to train her sisters very well if you want to recruit her, but you will only want to use her if you want to do the triangle attack, which she is needed. She is found imprisoned with some civilians. She is an NPC unit at first, so to recruit her she must be talked to by her husband or her sisters. Juno does not have any starting items, so you may want to give her some items if you want her to help out on the map or for self-defense.

Juno is a pre-promoted flier whose stats are less than stellar, but she doesn't need to fight, she just needs to be a flier. She can just fly over terrain and ferry units. Juno's uses lies not in her combat, but just her amazing class. While she may be the worst flier in the game, due to her low availability, bad bases, and bad growths; she's still a flier, and in every game there's always something for a flier to do.

One big issue with Juno is that she can't be used simultaneously with Dayan. While the former has flier utility, the latter has actual combat stats. It ultimately comes down to if you use Shanna/Thea over Sue/Sin if you want to use Juno.

Soaring Bride
A retired pegasus knight and older sister of Thea and Shanna. Joining the bridal festival alongside her husband, Zelot. Appears in Fire Emblem: The Binding Blade

Juno - Legendary Flightleader
"After returning to Edessa, Juno worked to reunite the divided Pegasus Knights of Ilia. Later, she was asked to lead the newly united Pegasus Knights, but she refused and led the rest of her life happily with Zelot. After her death, she was named the "Grand Flightleader" and is remembered to this day."

Juno is illustrated in the trading card game Fire Emblem Cipher with the following cards: 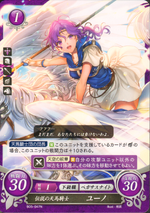 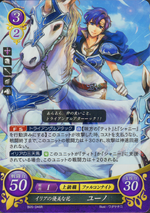 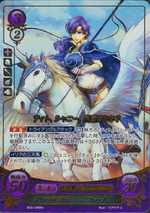 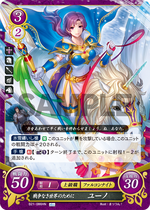 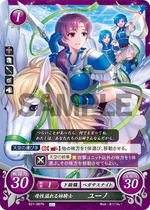 Juno is the mother goddess of Ancient Rome and the wife of Jupiter, king of the gods. In Greek mythology, her equivalent is Hera, wife of Zeus.