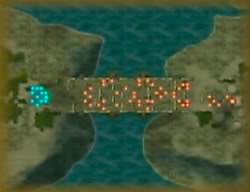 Chapter script
[view]
“Apostle Sanaki arrives without warning at the Central Army's main camp in Crimea. With a strength born of conviction, she exposes the senators' vile plot to undermine and usurp her. Valtome counterattacks with a claim crafted by the senate--that the apostle is a fraud who, along with her prime minister, Sephiran, is attempting to deceive all of Begnion and lead them away from the goddess's graces. To the citizens of Begnion, the senators are chosen by the goddess and are worthy of the same respect given to the apostle. As for the apostle, her image is tarnished when the senate imprisons Prime Minister Sephiran in her name. An ever-growing number of Begnion's citizens are willing to believe the senators' claim that the apostle is an agent of evil trying to deceive them. So it is that the Central Army is divided. One camp believes in the apostle, and the other supports the senate. This new turmoil fans the flames of chaos into a mighty conflagration, burning across Tellius.”
—Opening Narration

Just Cause is Chapter 3-11 of Fire Emblem: Radiant Dawn. The fight takes place on the same bridge from Fire Emblem: Path of Radiance Chapter 23, The Great Bridge, only now you have to cross it from the opposite direction. It is the only chapter from Radiant Dawn to feature pits.

The Laguz Alliance finally makes peace with the Begnion Central Army after Apostle Sanaki arrives at Begnion's central camp and barely saves Zelgius from an execution. There, she exposes the Senate's plot to take over the Empire. Queen Elincia officiates a meeting with Apostle Sanaki, King Caineghis, King Tibarn, and members of the heron Royal Family, Rafiel and Reyson. There they decide to make an alliance between Crimea, Gallia, Phoenicis, and the Begnion troops loyal to the Apostle.

Ike takes the command of the combined forces of all four countries against his will. The now called Apostle's Army decides to take over Flaguerre to take back Begnion; however, the Daein forces take control over a bridge connecting Daein and Crimea.

A trick to avoid the Pits is by placing a flying unit such as Haar or Sigrun over one known pit and let the other units pass through. This works only because there cannot be two units trapped in the same hole.

There may be points in the level where there is no way for ground units to progress. Try to bring infantry units that can be ferried over holes rather than heavier units who cannot be rescued by flying units.

The boss is a Level 17 Warrior who wields the dangerous Crossbow, Aqqar. Special care must be taken once Tibarn joins the fray, as his death is an automatic defeat. If Tibarn enters combat with the boss, he is able to one shot him. A solution to this is to have Ranulf rescue him in beast form and keep him until the danger is passed), or simply use Direct in Ike's command menu to prevent Tibarn's group from attacking the boss.