Head of the Kitsune

Max Mittelman
[view]
“I'm not an "it", human! I have a name. A better name than yours, no doubt. Call me Kaden. I'm the chief of this village.”
—Kaden in Chapter 19 of Conquest

Kaden is a playable character in Fire Emblem Fates and an ally on the Birthright and Revelation Routes.

Kaden is a Kitsune youth from a remote region of Hoshido. Following his father's footsteps, he held the position of leader of the Kitsune Hamlet and kept his people in order. If he achieves an S-Support, he will have a daughter named Selkie. He has the best posture in the army.

Kaden first appears during Chapter 12, where he introduces himself to Corrin. Azura recognizes him as a kitsune and asks him why he is very far from home, because they are not known for leaving the village for a long period of time. Kaden tells her that he must repay people that do good deeds for him, and when he left the village, met some humans that were very kind to him. It resulted in a snowball effect as Kaden was introduced to more nice people and they piled so much that he ended up in Cyrkensia. Before he can leave, he needed to repay a debt to someone and introduces them to Layla, who explains her problem to the Hoshidans.

He later joins Corrin's army in the same chapter to repay his new debt for allowing Layla to see her grandmother.

Kaden appears in Chapter 19, when Corrin and the army arrives at the Mountain of Fox Spirits. He is first spotted by Azura before emerging to warmly greet Corrin and their army. However, it is revealed to be a ruse to allow his tribesmen to surround Corrin and prevent them from escaping. While he believes Corrin's intentions, he refuses to let them pass due to an old Kitsune belief that the humans would kill the kitsune for their fur once they obtain their trust. He and his tribesmen fight the Nohrians, but Kaden and the tribesmen are killed in self-defense. Corrin then shows remorse for the unnecessary violence that occurred.

Kaden appears alongside Keaton in Chapter 13. They are both injured and warn Corrin and their army that the city is dangerous. Camilla hastily instructs Sakura to heal them and they are then questioned on how they their injuries were sustained. They reply that the town was destroyed by an unseen force and their injuries were a result of an attempt to stop it. Kaden and Keaton join the fight and decide to join Corrin's army afterwards.

In Paralogue 10, Kaden, accompanied by Hayato, is about to visit his daughter, Selkie, but he catches wind from bandits that Selkie is in trouble and races off to rescue her from the bandits. After fighting with the bandits, Kaden reunites with Selkie who tells her about the situation. Selkie apologizes, but Kaden convinces her to play a new game, "Hunt the Humans". After taking down the bandits, Selkie still does not get that the poachers were trying to capture her and kill her, but Kaden is nevertheless relieved to see her safe. Enjoying the "game" she played, she asks Kaden if she can join the army so she can continue to play. Kaden tells her that war is not as fun as she thinks and Selkie apologizes for getting carried away. However, since the army saved her, she wants to return the favor by fighting with the army, a sentiment that Kaden is proud of and lets her join the army.

Succeeding his father as the leader of the Kitsune clan, Kaden is responsible for leading his tribe, ensuring their well-being and security. He has proven to have performed a splendid job in this regard; in Chapter 19 of the Conquest route, he makes the momentous decision to fight against Corrin's army in order to protect his clan and avoid running the risk of invoking the threat of their being slain for their fur.

While he can be very serious in dire situations, Kaden is actually rather playful and mischievous. This may be observed in his various supports, where he teases and amuses the people he interacts with. Kaden is also known to go out of his way to repay those whom he feels indebted to, even if they have only performed a small favor for him.

Kaden is also a little bit of narcissist, spending much of his free time carefully grooming his fur. Proud of his coat, Kaden shows it off to everyone he meets, even letting them touch it to gauge how fluffy it is for themselves. His supports with Keaton reveal that he is afraid of spiders.

◾ Note: Growth Rates as a Nine-Tails

Kaden is the Hoshidan beast shapeshifter and one of two Kitsune units guaranteed to exist in Fates. Unlike Keaton, who focuses more of brute strength and durability, Kaden is much more lithe, making him much harder to hit and able to double on enemies much more easily than Keaton. While his defense growths are quite low and his HP growths are middling as well, unless facing high skill and speed units, Kaden dodges most attacks rather than trying to tank them. He also needs to be wary of units with Beast Killers as one hit from them usually spells instant death from him. During PvP and My Castle battles, enemy Kitsune and Wolfskin units may carry Beastbane, which is also a threat to him. His strength is also middling, leaving some concern when needing the damage necessary to kill units. Kaden's decent resistance growths does make him a good candidate for taking down mages or defending against them, though he cannot counterattack them from range. Should Kaden and the healer in the battle ever be injured in battle, he can use his personal skill Reciprocity which allows the healer to regain health whenever they heal him. Kaden's starting skills are Evenhanded which boosts his damage by 4 during even numbered turns and Beastbane which makes him effective against horse mounted units. While Evenhanded can be used outside of the Kitsune class, Beastbane cannot.

Kaden's only promotion is the Nine-Tails which presents very little changes to his stats aside from higher caps. He learns Even Better which gives him a 40% HP regen during even numbered turns and Grisly Wound which deals a bonus 20% Max HP reduction to enemies he has attack that turn. Overall, Kaden thrives during Even numbered turns with his base class and promotion's skills and should capitalize on those turns to attack while using the odd number turns to either reposition or retreat for safety.

Kaden's secondary class is the Diviner class. For the most part, Kaden's incredibly weak magic growths leave a lot to be desired from the class in terms of an alternative in the Onmyoji, but he still benefits mainly from the Basara promotion. Diviner provides Future Sight which is good for training as it boosts his EXP gains from time to time. The Basara class not only let him do decent damage with Lances but it provides Rend Heaven which can allow him to take down high strength enemies by using their stats to boost his own. Quixotic helps to boost Rend Heaven's activation rates and ensures that he can hit his enemies when needed.

Kaden can form an A+ Support with the following characters: Hinata, Azama, and Keaton.

Kitsune Braggart
The chief of a hidden village of kitsune. He has absolute confidence in the beauty of his fur.

Refreshed Kitsune
Leader of the kitsune tribe who prides himself on his beautiful fur, but is donning a kimono for the occasion of the New Year! Appears in Fire Emblem Fates.

Kaden is illustrated in the trading card game with the following cards: 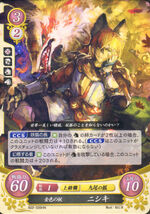 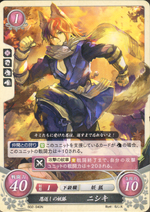 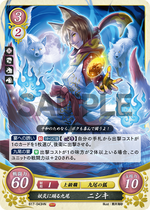 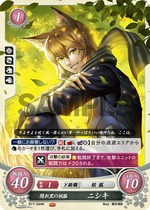 Kaden (花伝) is a feminine name meaning flower legend. Alternatively the family name Kaden (河伝) means river legend. Kaden may also be a play on the word on Cotton or Brocade. It may also derive from an Arabic word meaning "Companion"

His Japanese name "Nishiki" translates to "Brocade" or "War Banner".