You may be looking for the Fates character of the same name in Japan.

Bryce Papenbrook
[view]
“Me, I can’t imagine giving my all for a gig that doesn’t pay. No one asked you to solve this mess— let alone paid you—yet here you are. Seems like your job is a tougher one than I’m willing to take on. Makes me wonder if the gods are really worth all that trouble.”
—Kamui to Celica in Shadows of Valentia

Kamui is a playable character in Fire Emblem Gaiden and its remake, Fire Emblem Echoes: Shadows of Valentia. He is 28 years old.

A Mercenary from a distant nation hired by Valbar, Kamui used to live a nomadic life with his family and worked with grazing animals. However, they got into a scuffle with another tribe and lost, which led them to settle in a town. Unable to adjust to this lifestyle, Kamui set out on a journey, with his swordsmanship being honed due to his wanderings

After Barth is defeated, he joins Celica's party. After the war, he joins Jesse in building their own country in the lands that once belonged to Grieth. If Jesse is dead, he founds the country in his place.

With a placid and easygoing personality, Kamui is a freedom-loving drifter who hates commitments. Although he mentioned possibly giving up the blade partway through the journey, it seems the wanderlust in his blood wouldn’t settle for that, as seen in his ending.

In Echoes: Shadows of Valentia, it is shown that he has a deep fear of Necrodragons. His quotes also indicate that he likes money, and works as a mercenary to get it.

In Chapter 2, if he survived the previous battle, talk to him at the Pirate's Fortress.

In Celica's route, she gains access to three Mercenary units: Kamui, Saber, and Jesse. When considering the three Mercenary units that Celica can obtain, they can generally be simplified into 3 types. Kamui is the all-rounder Mercenary with even stats, Saber is the durable, defensive Mercenary, and Jesse is the late recruit with the best base stats and growths making him the most dangerous. An optional, Pre-Promoted Sword Fighter, Deen, is also available to recruit. Deen is best described as fragile and aggressive.

Kamui is one of the better units in Celica's route. He has average or above average growth in every stat. He has good starting stats other than his Luck and Resistance. His Resistance will be fixed in later promotions as the Dread Fighter class gets some of the highest Resistance in the game. He will also get increased Move as he promotes to Sword Fighter, and then Dread Fighter. He has excellent Speed growth and will wind up as one of your fastest units, Double Attacking virtually every enemy. His only real downside is that his Strength is somewhat low, as is common of his class. This can easily be offset with a good Weapon, though. He is useful from the time he is recruited all the way until the end of the game.

Kamui is the second of five potential Mercenaries recruited on Celica's route. Kamui has good bases in Strength and Speed, and decent bases in everything else. His growths are very mediocre in all stats, though his Strength and Speed growths stand out a bit. Depending on RNG, Kamui can either be outclassed by his peers, or be the most powerful of them all. His promotions help boost his key stats, and his reclassing options, especially Cavalier and Archer, are classes that are rare on Celica's route.

However, Kamui's fellow mercenaries perform well in specific niches, save for Saber and Deen. For one, Saber has the second best availability on his route, while Deen is a pre-promote with a Brave Sword.

Together with Jesse's group he works hard towards patching up the new country.

In the former territory of Grieth, he built a new country. Afterwards, he became known as the Desert Mercenary.

Intrigued by Jesse's idea, Kamui helped to found a kingdom of mercenaries, and lived there happily for a time. In the end, however, his wanderlust prevailed—one day he went for a stroll and simply vanished, never to be seen again.

Kamui established a new kingdom of, and for, mercenaries in what was once Grieth's territory. Relations with Valentia were favorable, with Kamui often aiding the king in times of need. In later life, his efforts earned him fame and respect as "the Steel Amidst the Sand."

Kamui is illustrated in the trading card game Fire Emblem Cipher with the following cards: 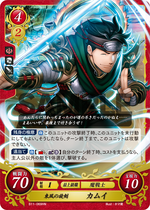 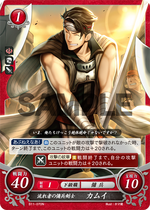 Kamui, or kamuy, is the word for a spiritual or divine being in Ainu mythology and is similar in concept to the Japanese Kami, or god.