Knight
[view]
“Bah! This is war, not some child's game! The only thing that matters here is who fights and who dies.”
—Karuma

Kamura is the boss of Chapter 8 of Fire Emblem: Path of Radiance: Despair and Hope. He is a Knight of Daein who ambushes and surrounds the fortress which the Greil Mercenaries are currently guarding. He is a somewhat overconfident man, as he is convinced that the mercenaries would either surrender or would be easy to defeat. The player does not have to defeat him to clear the chapter, as you only have to defend the inner entrance for eight turns until laguz reinforcements come to help.

If the battle ends with Kamura alive, he will nearly succeed in slaying Ike only to be killed by Mordecai and Lethe who arrive in time.

*Not present in first playthrough; dropped upon defeat

Kamura: You fool... What are you doing on the front line? This is no place for an officer! If you die, your army loses. Soldiers fight; officers lead. That is the foundation of war!
Ike: Hate to tell you this, but I'm not an officer, and I'm not in the military. I fight with my men, and I bleed with my men. I lead the Greil Mercenaries. If I can't fight, I've no right to lead.
Kamura: Bah! This is war, not some child's game! The only thing that matters here is who fights and who dies. 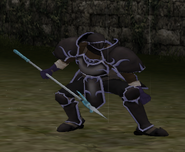 Kamura's battle model as a Knight in Path of Radiance.