Chapter 23: The Ghost of Bern (The Binding Blade)

Bryce Papenbrook
[view]
“Perhaps you think so now, but we both follow the way of the sword... All paths of the sword lead to one place.”
—Karel talking to Rutger in a support conversation.

Karel is a playable character in Fire Emblem: The Binding Blade and Fire Emblem: The Blazing Blade. He is a Sacaen swordmaster who has had two titles over the course of his career: the battle-crazed Sword Demon, and the sage-like Sword Saint.

Born in a family where only one can inherit the sword, and killed each other over it, Karel cut down his father and mother, and was a sole survivor, with the exception of his sister, whom he saw as no threat at the time. Afterwards, as if possessed by the sword, he went and slew Kelles –the Rock Giant of the Western Isles (said to be three times the size of a regular man), as well as Ilia’s Ice Emperor (a wizard that could freeze blood in a person's veins) among other strong opponents. From these feats, he earned infamy across Elibe, as well as the fearsome reputation as the "Sword Demon".

He encountered Eliwood while wandering and seeking opponents to fight, and joined his group in order to observe his skill.

Karel eventually changes significantly in the twenty years until The Binding Blade, as he traveled the land with a new nickname, the "Sword Saint", and resolve, having finally found peace in himself after many years. Having retired to a life of seclusion in a village when he grew tired of fighting, at his niece Fir’s request, he offered to aid Roy and his allies.

Living only to find challengers worthy of his blade and killing opponents in battle without remorse or hesitation, Karel was at first a cool and reserved person, but demonstrating a glimpse of his humane side when talking to allies, as he originally intended to slay his younger sister Karla in accordance to family law, but gave up after Karla's sincere heart struck a chord with him. Another example is how he was moved by Guy’s enthusiasm when teaching him the way of the sword. Nevertheless, Karel continued to seek out strong opponents and kill them to improve his skills. Despite his bloodthirst, Karel has a code of honor, making it a point to only kill warriors of greater skill than himself.

As he aged, Karel's disposition changed as he regained the humanity he had once cast aside, seeking to enlighten young swordsmen with his gentle eyes while considering his fighting skills "rusty" and potentially inferior to the youngsters, disliking the title he was given, claiming it is a false name, perhaps because of guilt for his past actions. He has no real interest in the overall state of the world around him, only joining the fight on behalf of his remaining family.

Karel can be recruited by visiting the village near the starting position with either Bartre or Fir in Chapter 24.

Karel is the final unit the player can acquire in The Binding Blade, and is often considered a member of the Gotoh archetype, as a unit that joins incredibly late but is good immediately. Despite having some of the most absurd growth rates the series has ever seen, with not a single one below 100%, Karel can only level up once, which makes them somewhat moot.

By the time the player has access to Karel, the game is nearly over. Karel can prove to be effective on the three maps that remain; with a Wyrmslayer or the Durandal, Karel has more than enough Strength and Speed to ORKO Manaketes and Wyvern Riders.

However, Karel will generally be worse than Rutger or Fir if they are fully trained, and Karel can also face issues justifying bringing him to the final maps of the game if the player bought many pairs of Boots from the Secret Shop several chapters prior, since he will join with a paltry 6 movement.

Overall, Karel can be acceptable filler if the player finds themselves with an open slot for the endgame maps, but will struggle to find his place on a team that is prepped and ready to go for the endgame.

For Karel to appear instead of Harken, open 4 or more doors by the end of turn 9 on Jerme's Map, or kill 2 or more of the 3 specific promoted enemies before turn 9 on Kenneth's map. Talk to Karel with Lyn or your main lord.

In The Blazing Blade, Karel has a much easier time faring with the enemies. When you look at him by himself, he's not that bad of a unit, (Arguably the best swordmaster in the game) but he is arguably worse in this installment, due to it being impossible to recruit both him and Harken. Harken has better bases, a better inventory in the Brave Sword (which is unobtainable otherwise), is capable of wielding the Hand Axe/Tomahawk for reliable 1-2 range attacks, has Hard Mode Bonuses on Hector Hard Mode and is oddly easier to recruit. While Karel himself performs better in this game than in The Binding Blade, due to being around longer and having solid player phase combat, Harken is just far superior to Karel, due to his stronger enemy phase and stats. Even more, Jaffar joins almost immediately after with higher base stats in everything but resistance (which can be patched up with pure waters), limiting him even more. Still, Karel has his uses as his sword, the Wo Dao, can be obtained only by recruiting him or Karla (who joins very late and only in Hector's Tale), which can be good as the weapon has a high critical rate which is increased even more by his class.

Sword Demon
A vicious swordsman from a family devoted to mastering the blade. Known as the Sword Demon. Appears in Fire Emblem: The Blazing Blade.

Karel is an often forgotten sword infantry unit in the wake of many others who debut before and after himself. Despite this, Karel is a potent sword unit that shares many traits to many of the top tier sword infantry users. He boasts high speed as expected of members of his archetype but also has moderate bulk thanks to a relatively high HP pool, giving him access to supportive HP reliant skills that most of his fellow sword infantry cannot use. Unfortunately, his Atk is a little lacking compared to some of the most potent sword users like his sister Karla. Still, he has enough from his special quirks to be a high tier unit.

Karel began with a Wo Dao, which grants 10 damage when he activates his Special skill. Karel covers his low Atk thanks to this effect and with his good Spd, he is likely to activate it often. Later he received a preferred weapon, Nameless Blade, which accelerates his special cooldown. It is a natural fit for members of his archetype but, if it is refined, he regains his old Wo Dao effect, becoming a special triggering machine.

Reprisal is a fast charging special that adds 30% of his missing HP to his damage, which means that he can achieve a wide range of damage depending on how injured he is, but its output can be inconsistent as a result, though he will have a minimum 10 thanks to his Wo Dao/Refined Nameless Blade effect. Defiant Attack boosts his Atk by 7 when his HP is under 50%, which is a dangerous threshold to keep him in just for a +7 Atk boost, even though he also has Desperation which guarantees him an immediate follow-up when under 75% health.

Karel’s reliance on his special for damage leaves him vulnerable to most Red and Blue bulky units who are able to take a few hits with little trouble and retaliate thorough his reasonable, but not quite bulky defenses. Units who are able to attack him and follow-up before he can counter are also strong options against him including Cordelia, Est, Reinhardt, Olwen, Setsuna, and Brave Lyn. Guard is particularly troublesome for Karel as it slows down his main means of damage

The standard sword infantry set is the general route for Karel as well, including Reposition for unit placement manipulation and Moonbow for its fast charging, Def ignoring effects. With Nameless Blade's base effect however, specials with longer cooldown such as Luna can be used in lieu of Moonbow.

Fury has a +3 boost to all of his core stats and the recoil it has afterwards helps put him into range of Desperation or Wrath, which not only accelerates his cooldown further, but also adds yet another 10 damage to his specials, thus in tandem with Wo Dao/Nameless Blade, Karel can deal a minimum 20 damage upon activation of his Special. Life and Death is a worthy alternative as well as his high HP pool is great for using Panic Ploy or Infantry Pulse for other team supportive options, though he can take a plethora of other Skill Cs such as Wave skills since they boost his stats as well as adjacent allies. Atk Wave is the best overall one to improve his offense, though he can run the Spd Wave skills to increase his Spd thresholds for doubling or preventing doubling.

“Gah... I... Not yet...”
—Karel's death quote.
“So let's see the power of the Demon Dragon.”
—Final Chapter Quote.
“No, you have not made any mistakes. The path you choose on your own is never wrong. In fact, I shall assist you from now on.”
—Karel, being recruited by Fir.

“Death cannot be bested with a sword... My skills are not yet honed to such a level. I should take my leave of this battle.”
—Karel's retreat quote
“As long as there's someone to cut, you will have my aid.”
—Final Chapter quote
“Your name is Mark, correct? A tactician? I see. You use wisdom as your blade... Interesting... Mark, I will remember your name.”
—Karel to Mark in Chapter 28H.
“…Here we are. Mm…a good wind. appropriate to the feast about to begin.”
—Karel upon entering the field in chapter Pale Flower of Darkness

Karel - Saint of Swords
"Once, Karel was known as the Sword Demon. Now, he bears a new name. What prompted this change, he will not say."

Sword Master - Karel
"Karel retired to a small Village in the mountains of Bern and lived his life in peace. Although many Swords came to him seeking direction, he never did teach any of them directly."

Karel is illustrated in the trading card game Fire Emblem Cipher with the following cards: 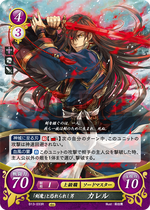 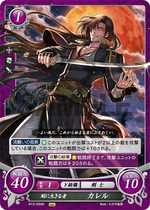 Karel /ˈkɑːrəl/ is a given name in Dutch and Czech, equivalent to Charles, meaning Free Man.

This name is a variant of the Germanic name 'Karl', which is the root of names like Charles. The word 'carl' in Middle English meant 'man', often a low-class man or 'churl'; it was used as an insult during the early Middle Ages in England.

This name might refer to Charlemagne (English: Charles the Great, German: Karl der Große), the famous king of the Franks and founder of the Holy Roman Empire, which makes him the founder of France and Germany.

Another possible person to refer to is Charles Martel (German: Karl Martell), who was the (in the end winning) leading commander of the Christian Forces at the battle of Tours, October 732. If the Armies of the united North African tribes would have defeated Martel's army at Tours, it is quite possible that the main religion of France, Spain, Switzerland and the western parts of Germany und Italy would have been Islam until today.