Pegasus Rider
[view]
“Yeah, and then they threw me in here as well because they thought I was with you. It's all your fault! What am I going to do now...”
—Karin, in a conversation with Fergus

Karin is a playable character from Fire Emblem: Thracia 776. She is a 14-year-old pegasus knight from Silesse who sets out on a search for the missing Prince Ced. Karin's pegasus steed is named Hermes.

Harassed by a group of Munster soldiers, Karin was rescued by Fergus, who beat them up. Mistakenly believed to have helped Fergus attack them, Karin was imprisoned in the Munster dungeon alongside Fergus.

Locked up in the same cell as Leif and Fergus in Chapter 4, Karin joins in a conversation Fergus strikes up with the prince and befriends him. When the Magi Squad later breaks into the dungeon to rescue Leif, Karin and Fergus flee with him.

Shortly after escaping from the dungeon, Leif's group is caught in a battle against the pursuing imperial guards in Chapter 4x. Here, she manages to find Ced, to whom she relays the sad news that the Silessian queen, Ced's mother, had passed away. Admonishing him for leaving his sister Fee to grieve alone, Karin tries to get Ced to return home. He promises to do so after driving Raydrik out of Munster, thereafter entrusting the Ced Scroll into Karin's possession before parting ways with her.

After Leif's group manages to escape from the interior of Munster and continue their flight with Munster hot on their heels in Chapter 6, Karin offers to help them out by having her and her pegasus fly everyone to safety.

Later in Chapter 16A, Karin can persuade Ilios to defect from the Friege army. When the two first meet, she teases him by calling him "Olson", a common name that juxtaposes with his vision to become a member of the nobility.

Karin plays another important role in Chapter 17A, where Leif's army clashes with Silessian general Misha in battle. If Karin talks to Misha in-battle and Misha is subsequently captured by Leif's army, Karin will convince her to see the error in her actions, in turn recruiting her to Leif's cause.

Karin then goes on to continue supporting Leif in his cause to liberate Northern Thracia from the Grannvale Empire. She returns to Silesse thereafter, fulfilling her dream of becoming a fully-fledged pegasus knight.

Karin is a tenacious person with a strong will. This fact surfaces most prominently through her resolve to embark on a solo mission to find Ced following the death of Silesse's queen despite being an inexperienced pegasus rider. This tenacity of spirit later extends to her decision to join Leif's army and help him bring peace to Northern Thracia.

Karin also has a vulnerable side to her, where she is prone to emotional outbursts when she is overwhelmed by her feelings. This can clearly be seen when she finally finds Ced in Chapter 4x, where she not just cries while relating the news of Silesse's queen's death, but also goes on to give in to her anger by scolding him for being irresponsible in leaving his mother and sister behind to travel.

Karin's ability to fly is very useful in the early sections of the game, which works very well in tandem with her adeptness in rescuing allies.

Her stats and growth rates are typical of a standard pegasus unit. With high Speed and Luck coupled with low Defense, Karin is heavily reliant on her ability to dodge. She also comes with decent Magic, allowing her to fend against magic-based foes with ease. On this note, it is advised to train her Sword rank to B, as her high Magic makes her a good candidate for the Flame Sword. This in turn enhances her usefulness even when dismounted.

Karin comes with a fair few flaws, including low Strength, Skill, Build and Pursuit Critical Coefficient. Her physical combat capabilities are thus not very good, and she is unable to use killing or multi-hitting weapons effectively.

Karin is therefore best suited for using the Continue Manual, which will help her with her offense quite a bit. Arming her with the Wind Sword also helps, granting a bonus of +5 to her already high Speed, meaning that Continue will activate very often. The Wrath Manual also works quite well with Karin, where the rise in her critical attacks will dramatically increase her damage output.

It is recommended to give Karin the Dain Scroll for more Defense and possibly Move. She can also use the Neir Scroll to remedy her Build, but as this will hurt her already low Skill, it is advised to give her the Odo Scroll at the same time to balance out her stats.

Karin's name is a fragmented version of the Greek name Katharine, meaning "pure".

"Returning to her native Silesse, Karin finally fulfilled her dream of joining the Order of Pegasus Knights. Although her service record doesn't indicate she went on to do anything particularly noteworthy, Karin nevertheless became regarded as an excellent Pegasus Knight in her own right."

Karin is illustrated in the trading card game with the following cards: 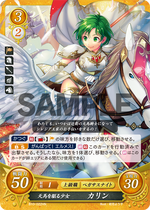 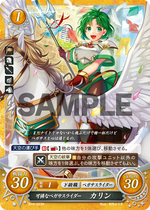 Karin as seen in the Fire Emblem Trading Game artwork

Karin as seen in the Jugdral Anthology series of the TCG

Karin as a Pegasus Knight in Fire Emblem 0 (Cipher).

Karin as a Pegasus Rider in Fire Emblem 0 (Cipher).

A portrait of Karin from Thracia 776 Illustrated Works